The redevelopment of Midtown Center and the most significant thrust in the wave of change transforming 23rd and Union can finally move forward toward a start of construction later this year.

The design review board has given its final blessings to the plans for Midtown: Public Square, a three-piece, seven-story apartment development with more than 400 apartment units, a quasi-public central plaza, and underground parking for around 250 vehicles set to rise above the land home to the old shopping center.

In December, the project was kicked back in the design process over concerns about the large installations of art panels hoped to help the project better reflect the culture and the history of the Central District.

Wednesday, the board said it was satisfied with a more detailed plan from the architects at Weinstein A+U and developer Lake Union Partners for the specific areas of art in the project and also approved of elements sought to improve the development’s relationship with 23rd Ave and the surrounding streets like improved glazing for the project’s central retail component.

When Midtown: Public Square is complete, it will create hundreds of new apartments — and thousands of square feet of commercial retail space anchored by a new drugstore. Regional pharmacy chain Bartell Drugs is planned to occupy the large retail space on the corner of 23rd and Union with a mix of smaller, more neighborhood focused retail and restaurant spaces surrounding the inner square.

Key to this week’s signoff is the “art plan” for the project. “This art plan is rooted in the values of reverence and discovery and takes into account responses from community members around their desires for how the project functions as a community space that is friendly, representative of an aesthetic that boldly recognizes the area’s rich heritage, and welcomes multi-generational interaction,” the architects and developer write:

The public art will present opportunities for the building to further reflect the heritage and culture of the Central Area, and for local artists to collaborate with the community, the architects, and the developer on public installations, which will have an immediate and lasting impact on the built environment of this neighborhood. A broad selection of diverse artistic styles, perspectives, and mediums will be represented in the selected artworks.

Developers also set out a process for selecting the art, Lake Union Partners says a panel of jurors will be comprised of community members and representatives “from Central Area arts and cultural organizations.”

The development will include around 125 affordable housing units allocated for households earning between $40,000 and $65,000 per year or 60% to 85% of area-median income (AMI) built as part of both the city’s Mandatory Housing Affordability (MHA) program and the Multi-Family Tax Exemption Program (MFTE). The Lake Union Partners project will take place on 80% of the Midtown block, while the other 20% of the property was sold by Lake Union Partners to Africatown Community Land Trust and Capitol Hill Housing. The two projects have separate review processes and construction of the Africatown component is years away from starting.

Progress at the site will also mean the loss of neighborhood businesses and services. CHS reported on some of the exiting Midtown tenants who have struggled to find new locations and the removal of the neighborhood’s U.S. Post Office.

Redevelopment of 23rd and Union has been a long, winding path. In 2017, development on the block went through preliminary design review under a developer previous to current owner Lake Union Partners.  A previous deal for the block got off to a rough start as the design review board rejected  the first design plan for the Midtown Center block for a project from national developers Lennar Multifamily Communities and Regency Centers. The rejection was soon a moot point when the deal for the big developers to purchase the property fell off the table. In 2017,Lake Union Partners stepped in with $23.25M to pull together a project on this core block of the Central District.

Lake Union is already the developer on three buildings around the intersection with a combined 275 apartment units and some 25,000 square feet of commercial and restaurant space. Included in that is the 18,000-square-foot New Seasons grocery store that will anchor the East Union building on the intersection’s northwest corner.

The project has been the subject of several reviews and community meetings including calls for a newly formed Central Area Design Review Board to become more involved in the project to help make sure that the black community was more fully represented in the process. The community efforts resulted in elements like what is hoped to be a better, more accessible designs for the development’s entrance “portals” and the integration of community art throughout the project.

As the plan for Midtown: Public Square has finally taken shape, another key Central District development project is ready to open for residents and new businesses. The Liberty Bank Building will create affordable housing in 100 studio and one-bedroom apartments, plus 15 two bedroom units above four commercial spaces at 24th and Union. Named for the region’s first Black-owned bank that once stood at the corner, the project will also be home to a new location for Earl’s Cuts and Seattle soul food restaurant That Brown Girl Cooks. The building from nonprofit developer Capitol Hill Housing will celebrate its grand opening with a ribbon cutting on March 23rd.

So happy about this. 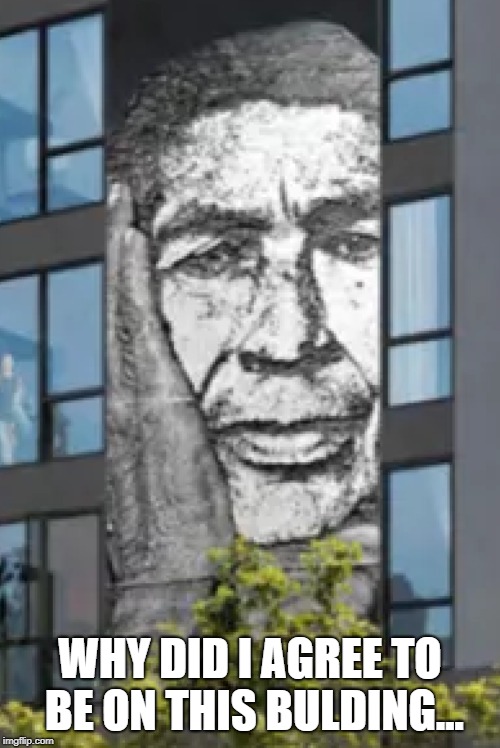 Fantastic news! I just hope the other 20% of the land doesn’t sit vacant for too long.

Agreed. At the very least they need to fence it off like LUP did, and please clean up all the garbage.

The neighborhood is tired of the stereo wars, drug dealing, and gunfire that becomes more and more common as the weather gets nicer every spring.

Can they leave the art as just “Art!” like in the draft plans?

Dang, how’d they land on two story tall random faces as the desired artwork? I’m all for murals of culturally significant figures, e.g. the MLK Jr mural on the side of Fat’s, but this just looks a giant wall of Getty stock images. Oh well, at least it’s finally being developed.

I think that is just a giant wall of Getty stock… but, it’s still just a placeholder and not the eventual and actual art that will be on the building… From my read of the article, that is yet to be determined, through submissions and a selection panel, so no need to worry, at least not yet.

@Brian N: please read the article and don’t just look at the images — your question will be answered.

wow, reading over the DR response package (https://www.seattleinprogress.com/project/3028872/page/39) and the city/dr board should be ashamed of itself. regardless of what you think about the building’s aesthetics, it seems that at least half of the response document concerns the configuration of the development’s public square. the response package shows a variety of thoughtful and elegant solutions over time. but the DR board misses the point. ultimately, a square is not a revision worth sending an affordable housing project back to the drawing board multiple times. they are acting as if they’re the design commission, rather than a force to house more people in seattle

60-80% AMI is not “affordable housing”. The bulk of the project is going to be market-rate. If you were talking about the Liberty Bank project across the street you’d be right on.

Thanks to CHS for their coverage of this story through the years. It’s been a lesson for me to see how community feedback and design review can shape and improve a development plan like Midtown.

I’d agree with earlier posts that the final plan could be improved, but it’s a world better than the initial 7-story rectangular solid that Bangasser had applied for when he was trying to sell the lot.

There were more than a few posts on this site, fretting that too much review would shutter the project. I think that those concerns were pretty clearly overblown. This won’t be the last big development in our neighborhood- hopefully our community can learn from the process.

Ugly. Every building is the same 4-5 story tall box. Who are these faces?! This corner is known for deaths of lots of black drug dealers and prostitutes in the 70′, 80′, and 90’s. Is the developer Hillary Clinton or Kamala Harris? Maybe they should also put giant pictures of hot sauce bottles and Tupac with black people smoking weed? This tacky, tasteless, insulting… The developer is just trying to do identity politics while it comes across plain dumb and insulting to black race… Make a damn memorial for a hard working businessman immigrant that was shot at his own business at this corner. Don’t do this token insulting mess on low quality buildings… Instead build better quality, concrete, taller buildings…

We Need Housing
Reply to  Mike

The developer has done what special interest groups poorly informed about the process have forced them to do, as is obvious to anyone who attended the reviews and local meetings, which frequently devolved into one side shouting down anyone who tried to speak up for rationality.

Finally! This review process has dragged on for far too long, while the block sits as a blight and a safety hazard for the neighborhood, and the city desperately needs more housing.