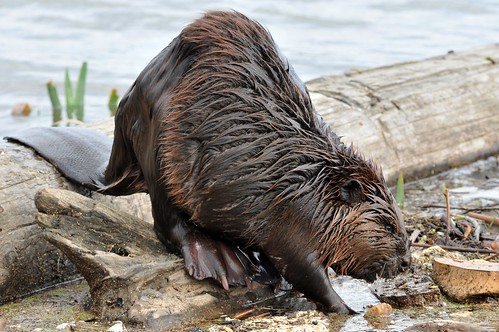 Beavers have a way of getting under our skin. Some people despise them, others think they are panacea, and cute as a button to boot. Beliefs and feelings often intermingle inextricably with facts, which is why I believe beavers are amazing creatures, and a landowner with a flooded yard might have different thoughts. And yet, we’re all talking about the same creature.

Now you’re reading this, thinking to yourself: “There aren’t any beavers on Capitol Hill.” On top of it, certainly you are right. However, a quick trip down to the water nearby yields obvious signs of their presence, regardless of our actually seeing a beaver.

The North American beaver, Castor canadensis, is a fascinating creature. They are huge rodents, the second largest in the world next to South American capybara, weighing between 24 and 71 lbs. They live in family groups that include a mated pair, along with kits and yearlings who are learning the ways of life before getting off on their own. They lack external genitalia, meaning people who study them often rely on scent (aside from genetic testing) to differentiate male and female animals.

Most importantly, beavers are keystone species, meaning that entire ecosystems are reliant on their presence or absence. For birds, plants, and fish they mean life, and luckily many an ecologist, land manager, and tribal nation have acknowledged this in their work more and more often these days.

I’ve long appreciated beavers, having never been worried about them flooding my yard. When I attended high school at Nathan Hale in North Seattle, nearby Meadowbrook Ponds had beavers. During free roaming photography class, I often drifted over in hopes of catching a glimpse. Recently, I wandered around the edge of Portage Bay at the Montlake Playfield where there’s a well known lodge. I was looking for fresh sign, with a brief hope of possibly spotting one of these aquatic mammals. My mid-day foray came up with old sign and no animals.

Hoping to get a little more perspective on beavers, I called up Ben Dittbrenner, Executive Director of Beavers Northwest and PhD Candidate at the University of Washington. “The highest probability of seeing beavers is to go out at dusk,” he said.

Dittbrenner’s research “explores how effective beaver reintroductions and beaver impoundments can be at mitigating hydrologic alteration due to climate change.” Basically, he studies how beavers, introduced or otherwise, can aid impending concerns about freshwater. Though he was careful to say that beavers are not cure alls, his work through Beavers Northwest, whose mission is “to advocate for the many benefits beavers provide through research, outreach, and landowner assistance,” makes it clear that Ben likes beavers. (Also, if you just sniggered, grow up).

The lodge on Portage bay this April. (Image: Brendan McGarry)

You’d never expect it, but beavers have a lot to do with how people of European, settlers, trappers, colonialists, interacted with the landscape and the indigenous people who lived here since time immemorial. Before Europeans showed up, there were an estimated 60-400 million beavers in North America. As ecosystem engineers that influence and create entire landscapes, you can imagine what it means when I tell you that as trappers and settlers spread west, they eradicated almost all of the beavers in their path. This near extirpation was done first by trappers for the beavers’ valuable pelts, and then by settlers because the rodents were considered swamp creating nuisances. Ben Goldfarb’s recent book “Eager” follows the twists and turns of beavers and human history in North America post-colonization, giving space for the complexities of the creature and our relationships to them. It’s well worth the read.

More recent sign of beavers in the Arboretum this April. (Image: Brendan McGarry)

Back to those beavers near the Hill. Dittbrenner spoke of the map on the Beavers Northwest website to find places for viewing in Seattle. He has good luck across the water at Yesler Swamp by the Center for Urban Horticulture. He also mentioned the Beaver Lodge Sanctuary on the edge of the Arboretum in Madison Park as a potential spot.

Still, despite the time of my visit, I found very little current evidence near the lodge on Portage Bay, so I made an assumption. No one was home.

Dittbrenner pointed out that this might not be the case.

On Google Earth, where I roughly measured the area of the lodge to be around 88 square meters and 12 meters across (!), he noted that imagery showed the area inundated with lily pads, but conspicuous trails through them leading to the lodge, with clear water all around the base. Beavers maintain access to their lodges. The satellite imagery is from May 2018, so it’s entirely likely there are some covert inhabitants. What’s certain is I am not a beaver expert, nor was I meticulous in my search.

An aerial image of the Montlake Playfield and the lodge by Interstate 520 on Portage Bay. Clearly something is going back and forth to the lodge. This image is from May 2018 on Google Earth.

In a 2017 paper published by Dittbrenner and colleagues titled “Reintegrating the North American beaver (Castor canadensis) in the urban landscape,” there is explicit support for beavers in the city of Seattle and other urban centers. It calls for landscape design to consider the beaver, and highlights the success of some recent projects around town. Dittbrenner said that despite the fact that they can be problematic, “there is no question that beavers are increasing diversity.” When we desperately want species like Chinook salmon in our streams, it makes sense that beavers, with their ability to create refugia for young fish and their food, should be welcomed into places like Thornton creek.

The human task is to try to figure out ways to interact that don’t require lethal trapping. From Dittbrenner’s perspective, more beavers are inevitable in urban Seattle. The question is, can we accommodate them for the ecosystem services they provide? Goldfarb’s “Eager” makes it clear as well: beavers will return. We can either waste a lot of time and money to be rid of them, or learn to coexist. I’d like to think we can find ways to get along too, because hell, I just think they’re fun.