Your Capitol Hill lawn is gender-fluid, too. Bobby Morris? That’s a different essay.

Pride month is here and I have something to tell you: Nature is queer. I don’t mean strange (though it is that too), but that the natural diversity of gender and sexuality in the Hill’s nature is part of its beauty. Culture can blind us, sometimes presenting facts that are actually fiction, particularly about the more than human world. Let’s bust that up a bit.

I write this as a white, straight, cisgendered man inexperienced in getting into the weeds on the subject of the LGBTQ world. Pride is easily co-opted as social capital, something I’d like to avoid. I am writing this not to co-opt but in an attempt to offer a few clumsy words to uplift some stories of natural diversity (and hopefully not inadvertently perpetuate violence or my privilege).

The complexities of gender and sexuality in nature (you may need to be reminded that this includes us), are fathomless. Despite being trained as an environmental educator, I am not a people expert; we will speak here about the more than human world, possibly as lessons for being human. The version of nature we are often given, of male and female organisms on an endless trail of sexual reproduction is a far cry from reality.

There’s a growing number of people that work to tackle these complexities in science, to quite literally queer ecological study. Foundational to queer ecology is the idea that human observers are biased and limited, bringing those things to their work. Here’s a simplistic example: When I observe House Finches, I automatically assign male and female designations to birds that I’ve been taught to know as such. I was also taught that only male birds sing, (which is simply untrue) challenged by the fact that bird I would have called a female is singing. This also highlights one of massive pet peeves when connecting people with nature, their habitual use of “he” to describe any creature. While the following does not absolve me of bias, I try to point out the seemingly male House Finch with a red breast to others by saying: “they are sitting on top of the Douglas fir.” I can’t really ask a House Finch its preferred pronouns, so why gender things?

Plants are a great example of the fluidity of gender, in as much as we can infer from reproductive anatomy. Many plants are hermaphroditic. That grass in your lawn, the corn that sports the ears we anticipate in summer, all hermaphrodites with separate male and female reproductive organs on the same individual. Most flowering plants plants are monoecious, meaning that a single flower contains both male and female anatomy. There are also plants that engage in sexual reproduction, dioecious species with individuals sporting only male or female reproductive anatomy. The holly trees that crop up unwanted in your yard are the result of sexual reproduction, as are the cottonwood fluff we’ve seen everywhere lately. I bring up dioecy, because this is an exception to the rule with plants. Only around 6% of all flowering plant species are dioecious. It’s well documented that dioecious plants will vacillate along a continuum of genders too when it suits their needs. 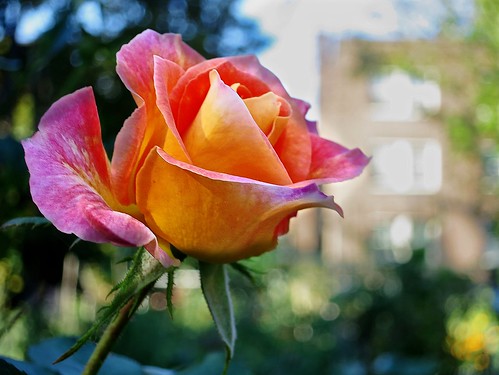 Slugs are another example of queer nature. For one thing, all of them hermaphroditic. I invite you to go ahead and read the “mating of gastropods” wikipedia page to get a view into the mystery and complexity. It’s hard to not see these interactions as a conflict between the two animals, each trying to pass on their genes more fully than the other. I would encourage you to not, but I wouldn’t fault you if you did, because slugs engage in post-coitious apophallation. One or both slugs chew off the other’s penile structure, which is presumed to encourage them to focus on making eggs instead of going off and breeding more, (apophallation is more along the lines of strange, I’m not suggesting it’s representative of queer culture). This is happening all over the Hill, possibly as you read this.

Many of you have been screaming that focusing on reproduction isn’t quite getting at the point of Pride. In fact, the lack of reproduction resulting from homosexual copulation has been twisted into a form of hateful rhetoric suggesting that it is simply an abnormality or unnatural, wielding Darwin’s theory of sexual selection as a bigoted weapon. Not only do these people clearly not know science or nature very well (see above), they also clearly forgot that love is part of the equation.

Ducks and geese are good examples of animals that regularly pair up in same sex partnerships, which are not based simply on sexual pleasure but appear to go deeper than this. When I was younger I remember someone pointing out two male Mallards on a pond who were floating side by side, and even preening one another. The explanation was that they were “friends.” Indeed they likely were. Quite possibly they were more than that. No scientist is likely to say that animals are in love, but we know it when we see it, even if we can’t ask.

In 1999  Bruce Bagemihl published a famous text called “Biological Exhuberance: Animal Homosexuality and Natural Diversity.” In this tome, Bagemihl dug deep to demonstrate that indeed, animal sexuality and gender is immensely diverse. Despite the best efforts of scientists to shy away from it, there are many examples of homosexual relationships in the animal world, specifically examples of 450 species pulled from scientific documentation and summarized in “Biological Exhuberance.” And seeing as that was 20 years ago, I can only assume there are many more examples related since, and more yet to be described. (It’s nerve wracking to write about this because I am fairly certain Dr. Bagemihl lives in Seattle, could read this, and I have only thumbed through his book.)

I have personally seen Southern Resident Killer Whale bulls engaged in casual sword play, their pink falluces flopping around on the surface of the Salish Sea. Bonobos, not too distant relatives are famed for their sexual freedom. In this polysexual, polygenedered natural world it’s ever more clear that many people are just really stuffy, and suppressing reality with ignorance. Life is full of mystery and beauty, why fight it? I think that Alex Johnson, who has written on the subject of queer ecology hits the mark when he says that popular culture presents truth as the point of science, when really it’s to pursue mystery, to follow the threads of unending learning and to recognize what we don’t know.

We can apply this to our human relationships, an encouragement to be curious about one another. No matter how hard we try, we’ll still apply labels to the trees, birds, and people. However, if we can interrupt this and ask questions, I believe we’ll be part of a generative culture we can be proud of.

A very readable and amusing book on the topic is:
“Dr Tatiana’s Sex Advice to All Creation”

Hamlet:
There are more things in heaven and earth, Horatio,
Than are dreamt of in your philosophy.

Hello.This article was really fascinating, especially since I was looking for thoughts on this subject last Monday.

There is an island tree going extinct because it’s a pollinator and there are no seed makers. Also juniper trees come in male and female. I seriously dislike gender studies. Is American Pharoah being forced into a hetronorminative relationship with female gendered horses who self identify as stallions?