The music finally got through to me the other day. Either through stubborn denial or mere chance avoidance, I hadn’t heard any Christmas music. I know people love it, and as a person who celebrates the holiday, I feel it’s appropriate in the week of. But not in November. Not before Thanksgiving.

Holidays can be equally as trying as they are happy and uplifting. However, in an attempt to dig deep into curiosity I had to ask: what’s this music talking about? Gritting my teeth, I cast across one of the songs that got stuck in my head. I started thinking about “The 12 days of Christmas” and its birds. Specifically, those “turtle doves.”

The two turtle doves of the song nod undoubtedly towards the European Turtle Dove, Streptopelia turtur. This bird has been in rapid decline all across its range and feels all the more appropriate as a grand gift today as in the 1780s when the song was first popularized in England. In the UK alone turtle doves have declined by 93% since 1994. One of the many reasons posited is an expansion and therefore competition from one of their cousin species, the Eurasian Collared Dove, Streptopelia decaocto.

While I grew up as an enthusiastic young birder in Seattle, Eurasian Collared Doves were working their way across the country. I had only seen them once before 2005, on a trip to southern Florida in High School. By the time I was in college, they had started to show up around grain lots in Eastern Washington. And then suddenly they seemed to be everywhere.

Thus far Eurasian Collared Doves still aren’t common on our densely urban Hill, though do show up from time to time. Searching data from community science projects like eBird, Project FeederWatch, and the Christmas Bird Count, it is easy to follow their increase, year by year across the country. Their arrival and expansion across North America has a fairly simple story. A chance escape in 1974 established the species in the Bahamas. By 1982 they were nesting in Miami, Florida. From there, a Northern and Western expansion began, mirroring the directions the species spread in Europe, as a commensal creature following the lines drawn by people. By 2007 they were breeding in Eastern Washington.

The language used around species like these doves is heavy-handed: alien, invasive, exotic. All terms carry a lot of violent baggage. This way of viewing species here by our hand can lack nuance when it drifts from the specificity of science. Those who study birds were poised expectantly for collared doves to be yet another invasive onslaught. Yet, the jury is out. Even research on large, well established collared dove populations have not found negative trends for native doves they conceivably might outcompete. Researchers at the Cornell Lab of Ornithology even found that native dove numbers were generally higher in places that also have collared doves, (which may have more to do with food availability and less to do with competition). On the intellectual front, collared doves have offered population ecologists an opportunity to study how rapidly dispersing, introduced species expand their range, and where they have even reached carrying capacity (as in reached a point where their population growth stabilizes). 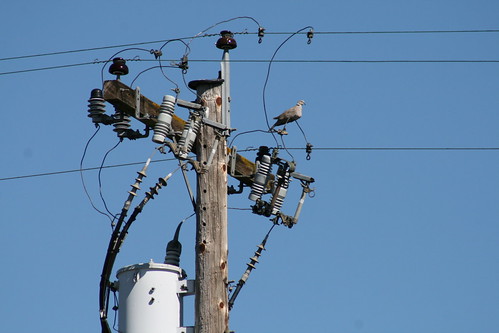 I wish to brush away deep impacts that novel species can have on biodiversity because I dislike the language used around them. Such accidental introductions can pose real threats. Thankfully Eurasian Collared Doves don’t yet appear to be that sort of species. I brought up turtle doves to  think about newcomers to the Hill, because we live in a rapidly changing world where this will happen again and again.

Looking at one of these doves, they hardly stir up ominous feelings of foreboding. They’re elegant birds, looking like a larger version of our native Mourning Doves, which are largely absent from urban spaces too. I find collared doves fairly comical, with ridiculous croaking calls and nearly constant nuptial and territorial behaviors that result from largely monogamous, year-round breeding (part of they expanded so rapidly). They are impressive long-distance dispersers too. After all, a previously Middle Eastern species is now living throughout Europe and South Asia, and has established across the lower 48 states within the last 30 years with hardly a nudge from us.

Eurasian Collared Doves probably won’t become fully entrenched on the Hill, preferring suburban and rural spaces unlike big city Rock Pigeons. They aren’t going anywhere though, so I urge you to keep an eye out because they might just surprise you at your feeder one day. And, while Christmas isn’t everyone’s thing for many reasons, including the music, their inclusion in the 12 days of Christmas could remind us that overall, birds are tremendous gifts that those of us who pay attention get to experience nearly every day.