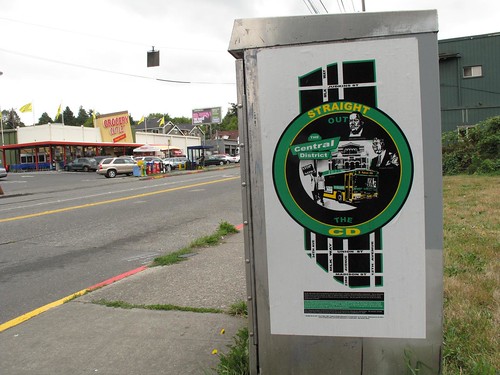 The MLK store also has its issues with theft, Mullen said, but he plans to stay invested in the community for the long haul. His current lease on the 17,000-square-foot grocery runs through 2032.

The new look for the market will come as the Central District is slated to add a new grocery option this spring with the opening of PCC at 23rd and Union. Another PCC remains in the longterm plans in Madison Valley. It also comes as other large grocery chains are starting to rethink the use of the land they hold. On Capitol Hill, CHS reported on Safeway’s early planning for possible mixed-use redevelopment at its E John store.

Meanwhile, the Central District is still adjusting to the loss of the Red Apple that was demolished in early 2018 to make way for redevelopment from Vulcan Real Estate creating a set of two seven-story buildings with more than 500 new homes at the key neighborhood intersection of 23rd and Jackson. As of yet, no new grocery tenant has been announced for that soon to be completed project.

The sprawling 1.6 acre MLK grocery and parking lot property is owned by companies registered to Kin Properties, a privately-held commercial real estate investment company with more than 750 holdings across the country.

Grocery Outlet stores, meanwhile, are owned and operated by local management but the company is part of a large, publicly traded holding firm that owns the brand and handles things like the coming MLK overhaul. Mullen and owners like him across Washington, Oregon, California, Idaho, Nevada, and Pennsylvania sell the products that come through the stores on a consignment-like basis splitting the proceeds with Grocery Outlet’s corporate parent in California.

The result is a grocery filled with every day needs including staples like dairy and produce — albeit the shelf life might be a little shorter. Much of the stock is from overproduction as high-scale factories produce huge quantities for worldwide distribution. Other items are what happens on a planet full of unexpected twists and turns.

Mullen said one favorite example was what happened when Olympic swimmer Michael Phelps was suspended after being photographed with a marijuana pipe. The Grocery Outlet system sent the Madrona store “pallets and pallets” of Frosted Flakes boxes featuring the swimmer and Tony the Tiger that had been pulled from regular distribution, Mullen said.

It is also the folks in Emeryville who are driving the facelift in the Central District but it is Mullen who is on the line for making it work. The stretch of MLK between Union and Cherry is changing faster than just about anywhere else in the area. Across the street, The Valley development has added new housing and room for several new businesses including neighborhood longtimer Cappy’s Boxing Gym. Up the street, a fresh crop of townhouses are popping up. With the Outlet — and some help from the Madrona Farmers Market that takes place in the store’s parking lot during the season — the neighborhood has access to nearby groceries and, usually a surprise or two on the shelves.

Mullen says he is happy to be part of this corner of the Central District for at least the next decade.

“This is an awesome community,” he said.

The real problem is that Trader Joe’s is cheaper for a lot of stuff. You’re basically buying almost stale or unknown products for top $. But atleast it’s not PCC prices I guess.

Groc Outlet is cheaper for a lot of things too. I always spend more if I go to Trader Joe’s. And Groc Outlet can’t be beat for prices on a lot of toiletries and household products. And wine, of course.

Good to hear. Still radio silence from Vulcan Inc about what a grocery store will be included at their 23rd and Jackson development. It would be a shame and huge impact if they displaced the Red Apple and can’t find a replacement!

Thanks. I should add a note about the Red Apple so it doesn’t drop out of the record. Going to do that now.

Essential Baking Co. – Madison location closed. To reopen as: Flour & Love Bakery?? Is that correct? Does anyone have more info?

It’s open today — what’s your source? Or you can email chs@capitolhillseattle.com

I walked by there this evening. There is a sign taped to the door regarding a new owner, and that they will be closed for a few days during the transition. A quick look on the WA state licensing site shows a new business license for “Love + Flour”. I didn’t see an opening date for the rebranded place.

Will check it out

I understand that it’s nice to have a source of cheap groceries for folks in the neighborhood, but man, that property is a serious waste of real estate. Imagine what such a huge piece of land could offer: hundreds of housing units, multiple small retail spaces fronting on both Union and MLK, a much better pedestrian environment, etc. Oh well.

Or hundreds of $3500 per month apartments above yet another PCC (RIP Madison Valley) neither of which working folks can afford.

As soon as you make your (very much correct) observation you have…residents (apparently) of 55 years (apparently) complaining how the Central District is being absolutely destroyed.

Because large lots with ugly, aging buildings is the HISTORY of the CD…and the way it should stay.

I mean….the East Union building, which replaced and gas station, was CLEARLY not a net gain for the area…because what this neighborhood WANTS AND NEEDS is absolutely no change whatsoever.

Desnity isn’t the problem. It’s how much it costs versus what jobs are available to the black people you forced to live here through redlining and now you want their prized property and won’t give them the work/money to stay in the area.

Love Grocery Outlet! They have the basics at a good price and you run into just about everybody there. I’ve always been curious about their business model. Great to hear they’re in for the long haul.

Long live the GrossOut!
A lot of the products they sell aren’t really close dated – they are specialty items that local distributors picked up and then discontinued when they weren’t successful at retailers

Groc Out is great. My neighbors and I have been shopping there for years too. The products they carry are affordable.
I’ve also compared the prices of the organic products I use to similar or same items at the Central Co-op, and Groc Out is cheaper almost all the time, same with organics at TJs.
Non-organics are cheaper too.There’s no “top dollar” pricing here that I’ve seen, I find that laughable.
I do buy organic fresh produce and meat at the co-op, but happily buy many shelf stable goods,chips of all kinds, refrigerated items, freezer goods, and many household items here; as well as the good deals on wine.
Glad to hear they are remodeling and have a long lease.

The stories reported in the article about frequently chadsing shoplifters into the parking lot and employees often being assaulted in these altercations, as well as the poor location with access issues to buses and low weekend vehicle traffic and low visibility from the street – all these reasons are much more likely than them closing on account of crime and homelessness – which are common problems in many of the low income, high crime areas where the grocery chain often is most successful.