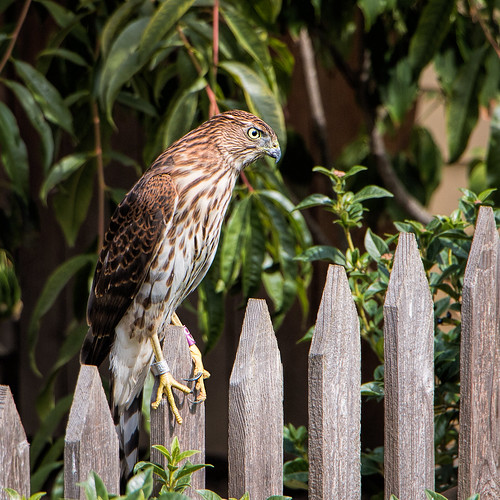 A steel gray bolt slashes across the blue of dusk. Rolling around corners, it disappears into darkening trees, apparating with a scrape of feathers through branches, and vanishes below the horizon. As it passes robins in the nearby holly tree squeal in alarm. They know twilight is trouble: the killing hour. If you’re a Cooper’s Hawk, it’s the time to make hay.

My first love of birds sprung from a woodpecker, but I’ve always loved raptors. As enchanting aerialists, they live long, interesting lives, and they are relatively easy to observe if you know to pay attention. Some of my best memories involve unwittingly getting too close to breeding Northern Goshawks and hearing the screaming rush of Peregrine Falcons in a dog fight over my Eastlake apartment building. I especially love Cooper’s Hawks. They occupy an ephemeral realm, wild, impressive creatures that permit our presence.

Cooper’s Hawks are the most common North American members of the Accipiter family, a group of hawks known for short wings, long tails, and a specialization for hunting other birds.  According to Ed Deal, President of Urban Raptor Conservancy, a Seattle area nonprofit focusing on research, education, and conservation of urban raptors, Cooper’s Hawks have become increasingly common in our area over the past several decades. They have been able to not only endure but flourish amidst our rising human density.

The Urban Raptor Conservancy has become the home of two long-term studies of Seattle area raptors: the Seattle Peregrine Project, started in 1994, and the Seattle Cooper’s Hawk Project, initiated in 2003. Peregrine Falcons have long held our attention, with their struggle back from the brink after the ban of DDT, to their outrageous feats of speed. Cooper’s Hawks have mostly flown under the radar. Really, that’s how they like it. Deal jokes that they wear cloaking devices.

If you’ve ever had a hawk visit your bird feeder on the Hill, there’s a good chance it was a Cooper’s Hawk. Not only are they happy to snag a bird at your feeder, they also happily eat rats, rabbits, and pigeons, all of which are numerous in our neck of the woods.

Deal says their main way into the urban spaces is by being such good generalists. They find Seattle so perfect that they’ve even stopped migrating, and birds that survive the winter (a hard time for many species), will likely stay in the area to nest. Instead of drifting off elsewhere, successfully raised young have been found in suitable habitat within spitting distance of their natal grounds.

The Cooper’s Hawk Project has been hard at it, documenting the rise of these birds in our city and the intricacies of their population dynamics. The project, which is possible because of volunteer efforts and individual financial support, has banded over 280 birds, documenting and monitoring 56 nesting pairs in our city this past year. Cooper’s Hawks in the study are color banded, which means they receive unique visual identification bands which tell observers if a bird is male or female, and as well as the individual’s identity. This is a more passive way to understand who is sticking around, and where birds disperse to and from.

On the Hill, Cooper’s Hawks nest in Volunteer Park, Interlaken, and the Arboretum.

Despite their rise, there’s reasons to keep a close eye on Cooper’s Hawks. Deal pointed out “there are not great sacrifices to live alongside such birds,” whose greatest threats are window strikes and rat poison. I’ve talked about how to reduce the chance of window strikes here, but it’s worth repeating: birds don’t know what windows are, and when a Cooper’s Hawk is in hot pursuit of another bird, it won’t stand a chance against a highly reflective surface. Of the 40 Cooper’s Hawk mortalities the Project has documented, 20 have been confirmed window strikes.

More insidious are rat poisons, in rampant use across the city and the Hill. Rodenticides are varied, but some of the most common are non-species specific anticoagulants that prevent blood clotting. Their toxicity can be passed on to predators and scavengers not to mention our pets. On the Hill, Cooper’s Hawks eat a lot of rats, as do other birds of prey.

To date, there have been no published studies of rodenticide effects on raptors in Washington State, but Deal and the Urban Raptor Conservancy aim to change that. They have initiated a study in conjunction with PAWS Wildlife Rehabilitation Center, which gets a number of dead raptors every year. Of the first 25 birds tested so far, Deal said 24 tested positive for one kind of poison, and 23 tested for more than one. In a recent survey between Cal Anderson Park and Volunteer Park on 11th Ave he reported finding 40 bait boxes, 9 of which were in Cal Anderson. 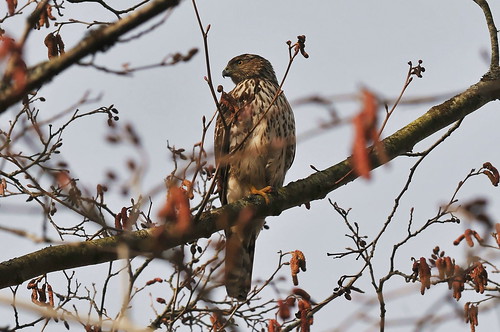 There are numerous other methods to dealing with troublesome rat populations, including excluding them from ideal habitat, better waste management, and even using birth control as the City of Chicago has experimented with. From the perspective of this author, and countless professional biologists across the country, it appears that we could do a better job of managing rats without poisoning other animals in the process. Cooper’s Hawks could be part of the solution if they don’t die while helping out.

Despite some challenges, Cooper’s Hawks appear to be continuing to expand in urban spaces. What’s fun about the project, too, is that we can all participate: “I’d love to get some good photos of banded hawks from folks,” Deal says. When that hawk perches on your fence to scarf a bird it nabbed at your feeder, snap a photo and send it along to Deal. You might be helping tell a new story of the birds on Capitol Hill by doing so.