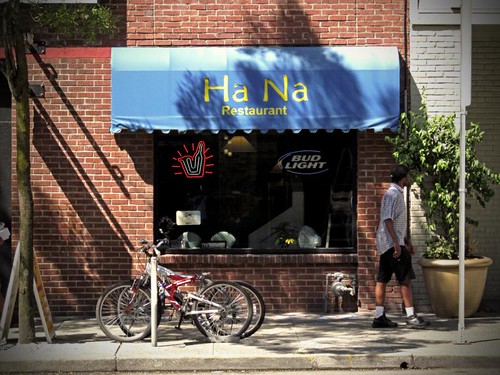 The longest running business in the odd but interesting mix found inside Capitol Hill’s Broadway Alley mall, Ha Na is another casualty in the neighborhood now permanently lost to the COVID-19 pandemic.

Owner and Seattle-area restaurateur Aung Aung, part of a partnership that took over the long-running sushi restaurant five years ago, confirmed the restaurant currently shuttered during the ongoing restrictions won’t be reopening. “Now is a very hard time,” the Ha Na co-owner said. “I don’t know about Broadway right now.”

The sushi joint dates back to at least 1989 and is the spot many Capitol Hill folks first enjoyed the exotic cuisine. Vanishing Seattle posted about Ha Na here in 2019. Make sure to enjoy the oldtimer debate in the comments about how old, exactly, Ha Na is.

Ha Na’s permanent closure leaves an empty hole in the Broadway Alley marketplace. Another hole was just re-filled as Americana returned from a “permanent” COVID closure under new ownership.

You can read more about the interesting history of the Alley here in this report from the CHS archives.

Capitol Hill and Central District COVID-19 Crisis Closures: CHS has tried to confirm all reported statuses. Please let us know if any information needs to be updated chs@capitolhillseattle.com -- LAST UPDATED: 12/7/20

So long, and thanks for all the fish. ♥️

I am sorry to see this go, Ha Na has been my go-to on Broadway for decades. Good luck to everyone on their next ventures.

I don’t think I’ll be able to replace my one and only Capitol Hill comfort food. I can make my own katsudon at home, but it’s never the same. Another little piece of the Hill will never be the same.

Positively heartbreaking. 💔 Ha Na has been my comfort food for two decades. Their nigiri were always the perfect size and prepared with real love. The fortune cookies in the early 00’s were always so delightfully out of place and delicious. I’ll miss everyone there. I hope all the chefs and team find happiness and wealth in their next chapter.

Just echoing the comments here, this is gut wrenching. Ha Na was one if not the only place on the Hill were it felt like family every time you went there. The sushi wasn’t mind blowing but it was more than fairly priced and the service was excellent. I feel this one.

I’ve been eating there the past 10 years. Sad to see them go

Ugh. They made the only edible teriyaki on Capitol Hill.

Horrible. I’ve relied on them for reasonably priced sushi and teriyaki for two decades. I wish they would resurrect like Americana.

You’ve been so much to me. My sister took me here in high school in the 90s. So many restaurants have come and gone but you were my culinary constant. You gave me my love of sushi, of curry udon, of clam miso and of geoduck. Loved the charm of your lovingly displayed special bento boxes. I loved seeing this one older man there every single time I was there. And echoing the fortune cookie love. In every other context, I’m not a fan but let’s just say I’ve used a few of yours to tip the balance of big life decisions. Please consider a go fund me. I’m heartbroken to lose you.

A regular since I moved to Cap Hill in 1993. Consistently delicious, not fussy, good food with a down home atmosphere. So sad. The place my kids asked to go to for their special occasion meals, from ages 3 to 18. Best wishes to all the staff. You will be missed.

So sad to see this go. In the article there is a question about how long HANA has been in business – my wife and I have been going there since 1985 (separately), first date together was at HANA in 1991. The salad dressing, chicken don /beef don, best value on sushi and the very best long-term staff (extra coconut hard candy each visit!). Our two boys have been going there all their life, and now go on their own and take friends. Hopefully reopen in a new location? Thanks for everything – we will miss you all.

I have fond memories of this hole-in-the-wall going back decades…another unneeded casualty courtesy of the “all the best men” in charge.

You will be missed. Good luck to all the staff!

Heartbreaking!! The katsu curry don was amazing here, the staff was always so friendly and welcoming. I will miss Ha Na deeply! Best of luck to the owners and staff, thank you for many years of goodness.

A restaurant can mean so much to your life. A place card of memories and people. I have been coming to Ha Na since it opened. I brought my parents, dates, friends, people visiting from other countries and at least every other week, ate in or take out. I have witnessed the changes to the layout, the water boats at one time etc. The food was always comforting and quite good. The staff excellent, kind and memorable. Good by to you all, wishing you the best in what comes next. Thank you, Thank you, Thank you for the memories and the excellence!

Thank you so much to all the wonderful people at Ha Na for the fabulous sushi dinners through so many years. We miss you very much and wish you all the best.

Do NOT follow this link or you will be banned from the site! wpDiscuz
16
0
Add a commentx
()
x
| Reply