Do you ever wake up from an unsettling dream and lie awake, praying to fall back asleep? You sit there, trying to tell yourself that checking the time will do nothing for you, while simultaneously hoping that you have many hours before you have to wake up again. And then the robins start singing outside and suddenly you know that you’ve lost. Dawn is near. Until you check your phone and it’s 3:30 AM and now all you can focus on are those damn birds.

An American Robin through the haze of dawn. (Image: Brendan McGarry)

If I am not in the depths of sleep deprivation, I actually quite enjoy the melodious songs of American Robins. With a few exceptions they are the first birds to start singing at the first creeping bit of daylight. You have to appreciate their dedication, telling you that spring is here and that soon it’s time to get up.

You probably recognize American Robins, even if you don’t know their name. They are the birds that dash across the lawn, hunting in mad bursts and sudden stops with a cocked head, which often end in a lunge and a struggle with what looks to be a rubber band. Earthworms are a favorite food, whether or not robins know the idiom.

American Robins, Turdus migratorious, are members of the thrush family, a group of songbirds found on every continent except Antarctica. The word “Turdus” may get a giggle from you, but it’s just latin for thrush and doesn’t have anything to do with how you feel about being woken up by these songsters. “Robin” is a misnomer of sorts, European colonists thought American Robins looked like a familiar bird back home, the European Robin, Erithacus rubecula. But they are actually “old-world flycatchers,” (which are also unrelated to the flycatchers we have in North America). If the folks who decided to go with the name robin had taken more than just a cursory glance they would have noticed that the American one is twice the size of the European, let alone behaves and looks very different than the European namesake. (And may have realized they look like a different colored Common Blackbird, Turdus merula, from back home.) So robins aren’t robins, but I guess it doesn’t matter?

Regardless of the accuracy of names, have you ever really looked at an American Robin? They are rather handsome thrushes but so common and omni-present that we might forget to truly observe them. Recently I found myself watching a freshly plumaged male bird, sitting atop a post in my garden. Red breasts are what catch our attention first, but what about the dark caps that fade in ombre to dark gray backs? What about those delicate white crescents that encircle their eyes? As he turned and I could see the white dots on either end of his tail feathers, the better to distract predators from taking a lunge at his body. 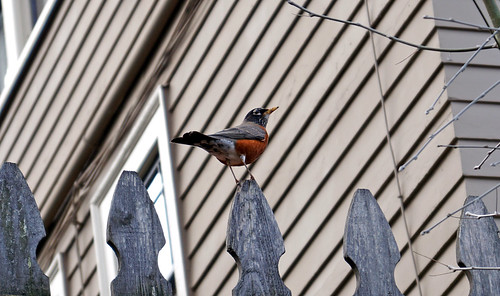 Objectification aside, robins are behaviorally interesting and easy to observe too. They run about our parks and gardens, they nest under our eves, they sing from our rooftops. They don’t care too much about us. Robin songs are wonderful but their voices are one of the most emphatic when learning bird language. They make such a ruckus about predators that I’ve had chance looks at owls and hawks, weasels and bobcats because of their boisterous alarm calls. Right now male robins are staging dramatic, screaming fights over territory that can end in actual knockdown physicality, sometimes right in front of us. Robins flick their wings, bob their heads, chuckle in warning, and give thin whines to communicate with each other while not giving away their location.

Without me telling you, I bet you know the color of a robin’s egg. You guessed it, robin egg blue. Female robins do most of the incubating of up to three clutches of these pretty little eggs, cupped in a nest crafted of fine clay and grasses; a new one every year is built by both parents. Though they are happy to hole away in a shrub, it’s not uncommon for them to nest on a sheltered nook along the side of a building. Mother and father aggressively defend their nests, bravely attacking crows, cats, and sometimes humans to keep them away.

This, as it turns out, is a necessary task because only 40% of nestlings make it fledging. Young robins are easy picking even after they’ve left the nest, with only a further 25% making it to the fall. Three clutches might be a necessary thing to keep robins going, but thankfully their population has been on a slow increase and they are one of the most widespread birds in North America. Outside of absolute tundra and deepest of temperate rainforests, they are around, raising their young and being loud.

Old sayings might have us thinking robins mostly eat worms. In reality they eat a lot of other invertebrates, often foraging on the ground and digging about in leaves and garden beds. They are sensitive to our use of pesticides and herbicides on lawns, yet another reason to stick to natural lawn care (if you insist on having one at all). Robins also love fruit and will happily descend on almost any plant with fruit, even berries we’ve grown to eat ourselves, much to our chagrin. They are also undoubtedly responsible for the spread of holly, hawthorn, laurel, ivy, and cotoneaster in our greenspaces, all of which are planted around the Hill and have healthy crops of fruit. Even fruit that’s a little far gone is on the table: robins are known for eating fermented fruit, which results in drunken weaving flight!

Is this robin getting drunk? I couldn’t tell you, but they definitely liked those hawthorn berries. (Image: Brendan McGarry)

We all need teachers when learning a new language and when learning birds or even just bird language, I think robins might be the ideal species to help us. Not only do they speak up, they are always around (even if in actuality robins are highly migratory and we might have different individuals breeding around us than those who spend winters flocking in our neighborhoods). If we want to, we can learn a lot about what it means to be a bird by watching them go about their days, oblivious or at least tolerant of our intrusions.

Thank you for a great article about these loud, lovely birds.

Loved this post! More bird stories please; perhaps one about Juncos! Thank you.

Do NOT follow this link or you will be banned from the site! wpDiscuz
2
0
Add a commentx
()
x
| Reply
Loading Comments...