Bryan Cohen is a CHS reporter. Reach him at chasecohen@gmail.com and @bchasesc

The East Precinct may still has the lowest approval rating of the five divisions that make up the Seattle Police Department, but public perceptions of the Capitol Hill-based officers are improving significantly.

A Department of Justice study released this week found 62% of residents in the East Precinct approve of police, up from 52% in 2015, and 49% in 2013. Citywide, SPD’s approval rating jumped to 72% from 64% last year. Approval ratings have also increased substantially among all surveyed racial groups, including a 14 point bump among African Americans. END_OF_DOCUMENT_TOKEN_TO_BE_REPLACED

The 23-year-old man whose arrest in a gunfire incident was captured on video early Saturday on Capitol Hill also had a warrant out for his arrest for allegedly raping his ex-girlfriend in SeaTac.

Following his arrest on Saturday, a King County Judge found probable cause to hold Southammavong for unlawful possession of a firearm. He is being held in the King County Jail on $200,000 bail. END_OF_DOCUMENT_TOKEN_TO_BE_REPLACED 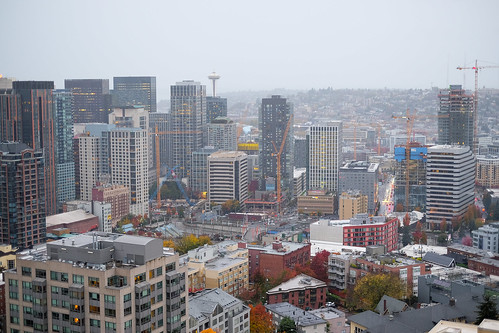 15% of Seattle is slated to be rezoned to allow for taller buildings as part of Mayor Ed Murray’s Housing Affordability and Livability Agenda. The largest concentration of rezones includes a swath of land covering downtown, Capitol Hill, and the Central District.

Most of the area’s multifamily housing zones would get the standard “HALA bump” — a one story increase in allowable building height along with new “mandatory housing affordability” requirements for all new residential construction. As part of Seattle’s “Grand Bargain,” MHA will link the creation of affordable housing with market-rate development by requiring all new multifamily buildings to make 5-11% of their units affordable or require developers to pay into an affordable housing fund. That part of the program has already been approved by City Council. Over the next year the city will hammer out how to handle the zoning.

Much of the First Hill-Capitol Hill urban center residential zones would receive the one-story bump along with a requirement that all new development include 5-7% of affordable units. Some would be required to meet higher affordability mandates. But the devil is in the details, and there are plenty of details to sift through when it comes to the zoning maps on Capitol Hill.

The Pike/Pine Conservation District is a unique incentive zoning program in Seattle responsible for most of the auto-row preservation projects on Capitol Hill. Changes proposed under the HALA map appear to undercut the program, but a upcoming tweak to the building code would likely keep those incentives in play.

Under the preservation program, developers get to build seven stories instead of six for preserving an old building facade in Pike/Pine. In the proposed HALA map, an up-zone in Pike/Pine would automatically allow for seven-story buildings. While preserving a facade would still get developers a one extra story, it seems unlikely they would take it. Building codes mandate that any building higher than seven stories must be entirely concrete or steel framed instead of wood, making an eight-story project vastly more expensive. END_OF_DOCUMENT_TOKEN_TO_BE_REPLACED

It’s part of a city-mandated program to improve safety in Capitol Hill’s core restaurant and nightlife area by moving the large metal containers out of the public right-of-way.

Half of the businesses in the corridor — roughly bound by Melrose, E John, E Union, and 15th — were able to keep their dumpsters by storing them on private property. Some of those businesses may still be dragging dumpsters into the street for pickup, but Seattle Public Utilities officials say they should not be out for long and certainly not over night. END_OF_DOCUMENT_TOKEN_TO_BE_REPLACED

Even in the final weeks of the 43rd District state Legislature race, Nicole Macri and Dan Shih are finding that convincing voters still starts with the basics, like explaining who you are and what you’re running for. The result: two campaigns with a blunt focus on boosting name recognition instead of homestretch strategies.

Macri won 52% of the vote in the primary, making her the presumptive frontrunner in the race (even though Shih has raised more money) with a geographic base of support in the denser areas of Capitol Hill and the U-District. Shih performed better in the more residential, single-family home precincts.

But the candidates tell CHS they are not putting much stake in the August results given how many people are still unaware of the race. “You have to go out and earn the votes all over again,” Shih said. END_OF_DOCUMENT_TOKEN_TO_BE_REPLACED

With winter weather rolling in and City Hall divided over what to do with encampments, Seattle’s homeless state of emergency does not seem to be letting up.

A Capitol Hill forum Thursday night is aiming to highlight some of the challenges facing people on the street face and inform residents on what can be done now without waiting for answers from City Council.

Part of that response is supporting outreach workers from the Downtown Seattle Association who have been working on Capitol Hill since January and will be presenting at Spare the Change, a forum hoped to provide real-world, practical advice for helping Capitol Hill’s homeless.

Jackie St. Louis, who oversees the outreach program, said the outreach staff and a supporting Capitol Hill “multidisciplinary team” have made significant inroads in building relationships with the neighborhood’s homeless population. From January to August, outreach workers made 469 contacts with people on the streets of Capitol Hill plus 59 contacts by a mental health professional. END_OF_DOCUMENT_TOKEN_TO_BE_REPLACED

Budget season is in full swing at City Hall and City Council members have begun their dive in what will likely be this year’s most contentious topic: homeless services. On Wednesday, the City Council discussed amendments to Mayor Ed Murray’s budget for the Human Services Department.

The $157 million budget represents a 10.3% increase over the department’s 2016 spending with $56 million in homelessness-related programs moved under a new Division of Homeless Strategy and Investment. Within that budget is $476,000 for four full-time employees to get the department rolling on implementing the mayor’s recently unveiled homelessness response plan Pathway’s Home.

That was the first bump in the road at City Council. District 3 representative Kshama Sawant said she opposed expenditure as the council has not fully approved Murray’s plan and said the funds should be spent on services directly. “I find this too rushed,” she said. END_OF_DOCUMENT_TOKEN_TO_BE_REPLACED

The scene at Garfield High School during a noontime rally Wednesday (Images: Alex Garland for CHS)

Hundreds of Seattle Public School teachers planned to wear Black Lives Matter t-shirts and incorporate lessons on racism into their classes Wednesday as part of an event organizers say is unprecedented in the racial equality movement.

More than 2,000 Black Lives Matter t-shirts were ordered in the district to participate in what Garfield High history teacher Jesse Hagopian called a “consciousness-raising” event.

“Racial equity will never be a reality unless people are willing to talk about it. This event provides an opportunity for conversations that can help our school move toward racial justice,” Hagopian wrote on his website.

The day of #BlackLivesMatterAtSchool will include a rally at Garfield’s 23rd Ave campus and culminate with an event at 14th and Fir’s Washington Hall with Seattle Seahawks player Michael Bennett and a performance by Kimya Dawson and others. Other schools in the region, including some elementary schools some outside the state, were participating and posting pictures of teachers wearing Black Lives Matter shirts on social media. END_OF_DOCUMENT_TOKEN_TO_BE_REPLACED

After years of shifting plans to meet the demands of city boards and community groups, architects behind the preservation development of the former Value Village building are honing in on the final vision for their office project.

On Monday, architects from Ankrom Moison presented their latest designs for the Kelly Springfield building to the Pike/Pine Urban Neighborhood Council, including how designs have been tweaked to address concerns from their last East Design Review Board meeting this summer. END_OF_DOCUMENT_TOKEN_TO_BE_REPLACED

Bernie Sanders was in town Saturday to raise bucks for Jayapal

Among all elected offices, Congress is somewhat unique, bearing both local and national responsibilities. Over the past few months the two candidates running for Seattle’s 7th Congressional District seat have come to represent those opposing roles.

On Saturday, Sen. Bernie Sanders headlined a rally for Pramila Jayapal, a prize endorsement given the former presidential candidate’s overwhelming popularity in the district. It also showcased Jayapal’s stronger national presence in the race.

Her opponent, Brady Walkinshaw, is hoping to overcome a large primary deficit by appealing to voters as the community-focused candidate. His strategy has relied on playing up the Capitol Hill-ties in bills he passed in the state Legislature and criticizing Jayapal for her outside-Seattle fundraising.

During a Thursday night debate between the candidates, the issue was further highlighted when a moderator asked how they would be different from retiring Rep. Jim McDermott, who was occasionally criticized for using his position to insert himself into international issues.

“Let’s be clear, United States Congress is a national position,” Jayapal said. “How do you deliver at home … also being able to articulate the values of this country?”

“I’m running because of our extraordinary home,” Walkinshaw said. “We need members of Congress who are rooted in their communities.” END_OF_DOCUMENT_TOKEN_TO_BE_REPLACED