Photographer Tim Durkan is a regular contributor to CHS. You can view more of Durkan’s work at facebook.com/timdphotos.

One of my favorite aspects about Capitol Hill is the cast of characters that you can meet on any given night — like Orange Man here.

I had been curious about the appearance of this colorful mural on a nearby wall but hadn’t actually seen anybody at work — until a late night walkabout. Seems the artist, who’s real name is Patrick Grogan, is not only very talented when it comes to depicting whimsical, dream-like landscapes but also quite the philosopher.

The (short version) story here involves the connectivity between nature and ourselves through the galactic space-time continuum — awesome! Patrick also told me that he provides this work for free so that we can all feel the connectedness, so if you live in the neighborhood you should go connect with it because it’s cool :-) If you’d like to see more of his work online – go check out PatrickGrogan.com. More pictures, below. END_OF_DOCUMENT_TOKEN_TO_BE_REPLACED 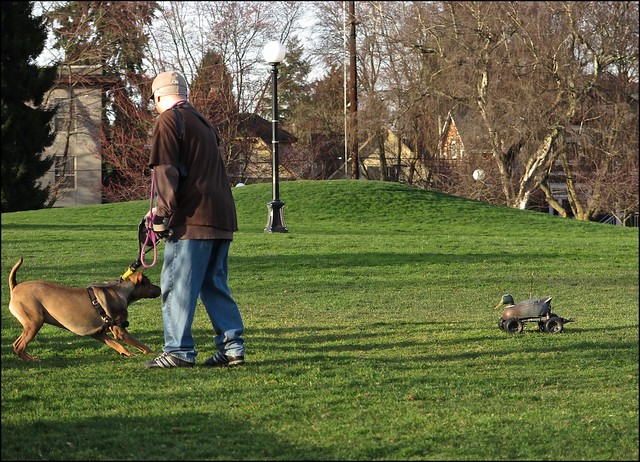 First spotted pedaling the streets of Capitol Hill in summer, the biker we call No Hands Man has been seen circumnavigating everything from bustling sidewalks to rush-hour traffic — like a boss.

Though his identity had been a mystery for these many months, his navigation abilities and situational awareness are legendary and impressive to witness in person. Here, No Hands can be seen shredding it through the congested intersection at Broadway and John during a downpour — while directing traffic.

Though it may be entertaining to watch or even tempting to emulate his enthusiastic style of bicycling, health officials would like to remind everyone they are likely to lead happier lives by following Seattle Municipal Code 11.44.260 which requires the use of one hand at all times.

A silent yet alluring clown girl has been seen enjoying a coffee and dancing along the 300 block of Broadway E in recent nights. She is evidently quite nimble and sure-footed as several onlookers have been mesmerized watching her scamper about rooftops and fire escapes with the skill and ease of an acrobat. We’re told the superhero of sorts was returned from a fight to save a friend earlier on this particular night. END_OF_DOCUMENT_TOKEN_TO_BE_REPLACED

A young man so enamored with the sights and sounds of the nearby club scene failed to notice he was jaywalking in one of Capitol Hill’s famously festive intersections Saturday night. Fortunately for the man, the alert driver was able to stop short. Unfortunately, the dramatic hood slide by the hooting and hollering pedestrian did appear to leave a bad impression on both the car and driver. No injuries and only minimal damage were reported.

My pussy’s on Broadway (Images: Tim Durkan with permission to CHS)

I first spotted the cat later identified as one Mr. Bojangles around 5:30 PM Friday on the corner of Broadway and Thomas. His swaggering cat style caught my attention and led me to believe that he was having a pretty good time and not in any real danger — so I tagged along for a minute. END_OF_DOCUMENT_TOKEN_TO_BE_REPLACED

I was made aware of police responding to a disturbance at 10th and E Pike Monday night and decided to to get a closer look for myself. One never knows what kinds of photo ops lurk in Capitol Hill’s famed nightlife area.

As I arrived at the the corner nearest Poquitos, I listened to a street musician playing his homemade drum kit before a small but appreciative crowd. I recognized him from some photos I took last summer but had never had the occasion to introduce myself until now. Given CHS’s recent discussions around street drumming, it was a good time to say hello.

35 years old and originally from Rhode Island, Joe has been living in Seattle for about 13 years but has been homeless for the last several. He says that SPD had just paid him a (polite) visit to report a neighbor’s complaint and asked that he finish up by 10 PM. “I’m reliant upon the income I make from playing here 6 nights a week and the 10 PM to 2 AM hours are really the best,” he said. “It’s unfortunate.”

END_OF_DOCUMENT_TOKEN_TO_BE_REPLACED

I’ve known Luke for about five years now and have come to appreciate his quiet demeanor. He often stands out from the hustle and bustle of Broadway because of his shy nature. Luke doesn’t keep a lot of friends but considers Rick, the person he’s with tonight, his closest ally. Smiling and in a soft tone he reveals “I feel safer and happier being around him. He’s my best friend.” Rick acknowledges the compliment with a big smile and friendly nod.

“I was born in Arizona in 1978 and grew up there with my family. I lived in Germany for about 3 years but consider Seattle my home now. I’ve lived here for about 15 years and most of them homeless on Capitol Hill. Sometimes I wish I could get off the streets because it can get rough, but I do enjoy the freedom. I have family in Tucson, a brother and sister that I talk to sometimes but I don’t miss them too much. I guess they miss me, though. My street friends and Rick especially – they are my family now and we look out for each other. At least we try, you know? We fight, we argue but we always come back for each other in the end because nobody else will.”

Luke is up front about his drug use and the impact it’s had on his life.

“My drug of choice is heroin but it used to be meth. I really wish I hadn’t done either. I wanted to be a doctor but lost my self esteem when I started using. It’s horrible being addicted especially being dope sick (withdrawals). Your eyes water, bones ache, stomach hurts, muscles tighten and spasm…runny nose, diarrhea. It doesn’t even get me high anymore, actually, it just takes the pain away and helps me feel normal.”

I asked him what he thought about Capitol Hill.

“I like it but most people think the homeless are addicts and that isn’t true. I am, but I don’t like being judged on that alone. A lot of people out here are homeless for reasons beyond their control – other than drugs. I wish I had never done drugs to be honest. I’ve been in and out of treatment and jail several times but it didn’t work and here I am again. It doesn’t make me bad person, though.”

His advice for others was simple:

“Don’t do drugs, especially meth because it will lead you to heroin. You’ll wind up an addict and on the streets like me. It’s a shit-hole out here and here is where you will die – alone.”

Somber words he hopes others will hear.

With that, the two gather up their belongings and ready themselves for another night on the streets of Hill. “I’m happy to do this interview,” Luke says as he shakes my hand. “To think about my life and whether it’s time for change was a good thing I haven’t done in a long while. Thank you.” Kind words indeed, and ones that could well serve me in the future. Thank you, Luke.

It’s a wet, blustery night on Capitol Hill when I run into Rick enjoying a chocolate shake in front of a well known burger joint on Broadway. He’s panhandling with his best friend Luke when they figure they have enough for a coffee and head off to a nearby outdoor cafe.

Rick, who prefers that I not use his last name, just celebrated his 40th birthday and smiles when he says, “I didn’t do anything fancy, but I am thankful to be here and to be alive.” Originally from Tacoma, his birthday also represents another important date; marking 22 years of being homeless on the streets of Seattle — most of them here on Capitol Hill.

“It doesn’t really bother me, being homeless,” Rick said. “I don’t like being controlled by others, especially Uncle Sam. I may get my own place one day but don’t want any strings attached. There are benefits to being homeless. END_OF_DOCUMENT_TOKEN_TO_BE_REPLACED

Sean has been living on the streets of Capitol Hill for about 10 years and says he’d like to get off them one day. “Capitol Hill is a cool neighborhood. It has everything I need and is centrally located. The cost of housing is ridiculous and sometimes overly opinionated people go out of the way to mess with you because they don’t like what you do or who you are, but there’s a lot of good people up here.” (Image: Tim Durkan for CHS)

Photographer Tim Durkan is a regular contributor to CHS. This is a new series on CHS dedicated to capturing the faces and the stories of people on Capitol Hill. You can view more of Durkan’s work at facebook.com/timdphotos.