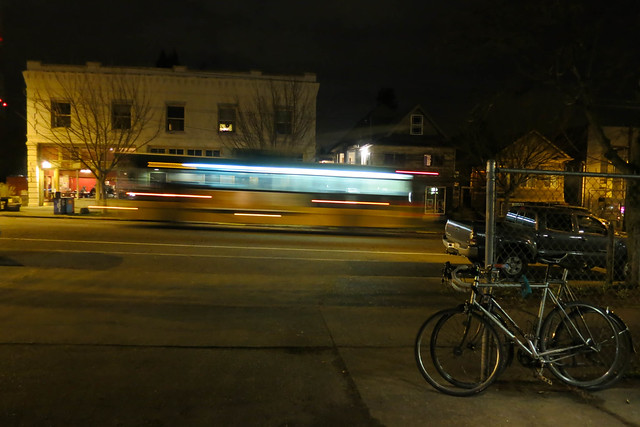 In April, Bus Stop looked at what King County Metro’s long range plan — envisioning our bus network in 2025 and in 2040 — might mean for Capitol Hill routes and the riders on them. Today I want to look at how the future network sketched out by Metro’s planners imagines how things will change in Capitol Hill’s connecting communities, First Hill and the Central District.

Frequent routes
Metro defines a frequent route as a route running at 15-minute or better frequency during most of the day. Evening service, however, can be another story, but we are going to look at the frequent routes Metro has included in its long range plan as those are going to be the most important ones for providing reliable neighborhood service.

One of the most frequent routes in this network will remain the route 48. Funds have been dedicated in the Move Seattle levy package to convert the 48 corridor into a Bus Rapid Transit (BRT) corridor, combined with the highest ridership route in Metro’s fleet, the 7 running on Rainier Avenue in Southeast Seattle. END_OF_DOCUMENT_TOKEN_TO_BE_REPLACED

The Madison bus rapid transit line is slated to open in 2019.

With its big U-Link bus restructure in place, King County Metro has quietly begun laying the ground work to adapt to the next phase of expansion of Sound Transit’s light rail system. Within days of Seattle getting its first look at how Seattle’s light rail network will look in 2040 — with service to Ballard and West Seattle, in addition to Everett and Tacoma on the extremities of the system — Metro released a map showing its first attempt to serve our region in conjunction with that system. CHS dug into the Long Range Plan map to find how those changes would affect Capitol Hill.

As we have seen in the past, these plans can change dramatically, even more so with the timelines in decades instead of years. But the map provides an insight into how transit planners at Metro are attempting to serve Capitol Hill riders. Metro is breaking these changes into two conceptual phases: 2025 service and 2040 service.

The biggest change that will be in place by 2025 is Madison BRT. This project will consolidate service on Madison Street in dedicated lanes between downtown and Madison Valley, freeing up some service hours to be used elsewhere to complement.

As a result, Metro is eyeing moving route 2 off Seneca St. on First Hill and onto Pine Street in Capitol Hill.

This change, in turn, will pave the way for Metro to create a new crosstown workhorse between the Rainier Valley, Beacon Hill, and Capitol Hill from the current route 49. This route will serve 12th Ave, which perplexingly does not have any Metro service today despite being the eastern edge of one of Seattle’s largest private universities. This will also be the most frequent transfer between Madison BRT and light rail service at Capitol Hill Station. END_OF_DOCUMENT_TOKEN_TO_BE_REPLACED

One year ago we looked at things to come in 2015. One of those things we’re still waiting on, but most of them came to pass and improved what it meant to get around on Capitol Hill by public transit.

Let’s look ahead at what’s to come this year, which promises to be even bigger:

As Capitol Hill grows and the options for public transit also expand, we’ll continue to report on what’s being done to make our neighborhood accessible for all who live here and those who visit. Cheers to a good 2016, Capitol Hill transit riders.

For those that couldn’t make it to the downtown library for November 16th’s SDOT open house on the latest Madison Bus Rapid Transit plan, we have the department’s briefing on the project from last week’s City Council meeting, below — plus some non-BRT news from the open house about a rollback on one of the most significant changes that had been planned for Metro routes to better align service around the opening of Capitol Hill Station and the U-Link light rail expansion in early 2016.

BRT presentation
SDOT officials presented details on the latest plans for Madison’s overhauled bus route in a session with the City Council’s transportation committee last week before the Thanksgiving holiday. The information presents an opportunity to see the plans shared at the public open house earlier in November.

Presenting the material, SDOT officials described the future Madison bus lane as part of a citywide “network of BRT” and said they were pleased to find “the biggest complaints” at the open house had been that planned “transit lanes don’t extend far enough.” “There’d be relatively limited benefits” but “significant capital costs” to extend the dedicated BRT lane all the way to MLK, one planner said. END_OF_DOCUMENT_TOKEN_TO_BE_REPLACED

The 43: staying put, at some times of day (Image: Ryan Packer)

With the days dwindling before the start of light rail service on Capitol Hill, the King County Metropolitan Council unanimously approved Monday the set of changes to bus service that will commence with the start of U-Link service next year. We have been discussing those changes in this space since April, and along the way public comment has shaped what this proposal contains, in large part by prompting Metro to reduce the amount of dramatic changes that will be made on Capitol Hill.

A well-attended meeting in Sand Point earlier this month appears to have been the final nudge for King County Council member Rod Dembowski to introduce an amendment in committee that retains the route 43 in its entirety during peak hours, retaining a direct connection between Montlake and downtown. This amendment passed, and also included a handful of last minute changes to northeast Seattle routes. The deletion of the 43 in favor of increased frequency on the 48 and the rerouting of the route 11 to take Olive Way to get downtown was the most unpopular segment of the restructure proposal. Now the 43 is here to stay, but only at 30-minute frequency at peak times.

Monday in comments before the vote, Dembrowski said Metro should achieve “Nordstrom level of service” when it comes to customer feedback and expressed his concerns that “one-seat rides” are going away for many riders outside the city’s core. END_OF_DOCUMENT_TOKEN_TO_BE_REPLACED 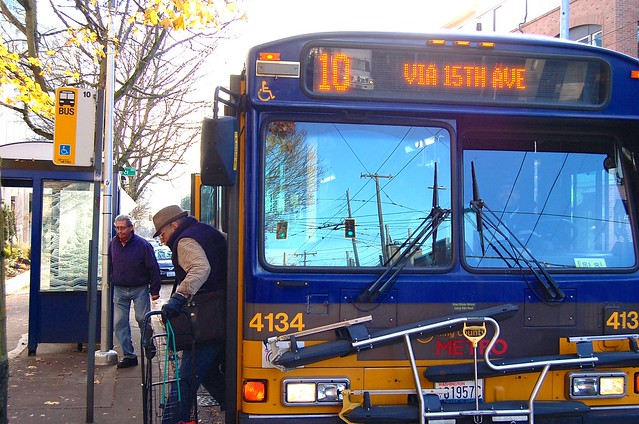 The 10 saw added service in June. This week, almost all other bus routes follow.

This week, the second phase of increased bus service in Seattle begins, funded through Prop 1 after it was approved by voters last November. In June, Seattle transit riders saw the groundwork laid for a large increase in service, but it is this week that we are seeing the majority of added trips on bus routes around town.

In Capitol Hill, this increase might very well be the most important move that King County Metro (thanks almost entirely to Seattle voters) will be making in the lead up to the commencement of light rail service between downtown Seattle and the University of Washington early next year. With only one light rail station serving the entirety of Capitol Hill, frequent bus service to areas not directly served by light rail will be paramount to ensuring as many Hill residents are able to use the frequent, dedicated service as possible. END_OF_DOCUMENT_TOKEN_TO_BE_REPLACED

A line waiting to board an 8 on a recent weekday stretches almost to the end of the block.

Few bus routes in Seattle are developing a reputation for unreliability like the 8. But let’s be fair: the 8 has it rough. It’s a huge route, traversing the entire Rainier Valley, the Central District, Madison Park, Capitol Hill, north Downtown, and Lower Queen Anne. And it’s the go-to route for people to get between the city’s fastest growing job centers of South Lake Union, Denny Triangle and Capitol Hill.

Unfortunately, it depends on the same road that most people in the same neighborhoods use to get to I-5: Denny Way. There are no other options to get across the freeway to Capitol Hill save heading to downtown streets which are already packed as well, or taking Lakeview Boulevard, which would be a detour so long it wouldn’t benefit anyone.

And the problem is getting worse, and spreading outside peak hours. In the 2014 Metro Service Guidelines Report, King County reported that the route 8 ran late 30% of the time- and 44% of the time during peak hours. In 2010 only 25% of trips were running late, though the peak hour percentage was relatively constant at 43%. END_OF_DOCUMENT_TOKEN_TO_BE_REPLACED

It’s been five weeks since Seattle started seeing added service on King County Metro buses. It is only the first phase in what has been promoted by members of the city council as the “best bus service Seattle has ever seen” and the improvements that have been made on the Hill are more targeted than the ones being applied elsewhere in the city, but I’m devoting today’s column to what Capitol Hill bus riders are seeing at the stops.

The most noticeable change is the return of the 47. This Summit Avenue/Bellevue Avenue bus, deleted in September (we gave it a nice sendoff) is back, with even more limited service hours than it had before. With only 12 minutes on the schedule from one end of the route to the other, and half of the route being shared with the 43 along Pike & Bellevue. this bus returning to the hill is a large chunk of the service hours Capitol Hill is receiving from the increase in the sales tax rate and car tab fee.

END_OF_DOCUMENT_TOKEN_TO_BE_REPLACED

The proposals for improving the bus network in Capitol Hill that have been coming from King County Metro over the past few years have varied pretty widely. From an emergency service proposal to staunch the effect of massive bus cuts, to a Seattle-only expanded service proposal that hasn’t even taken effect yet, the ideas for changing bus service on the Hill have been all over the place, and it would not be unreasonable to assume that the average Hill resident has not been able to keep up with them.

This week, Metro released its latest University Link restructuring proposal for Capitol Hill and northeast Seattle, set to take effect in the first quarter of 2016. After taking comments regarding its two alternatives, Metro has released a third proposal, dropping most of the really frequent service and retaining almost every area’s direct connection to downtown. The result is a proposal that falls short of a frequent service grid that was its clear ambition with alternative 1.

Here are the proposed changes, with the most dramatic stuff first. END_OF_DOCUMENT_TOKEN_TO_BE_REPLACED

The 25 is probably the most infrequent bus to run through Capitol Hill during daylight hours, and is also very likely the one with the best views of Lake Union and the Olympic mountains.

Never heard of the 25? It runs between downtown and northeast Seattle, and it takes a meandering route between there and Eastlake Avenue via Lakeview Boulevard and very north Capitol Hill. It runs every hour, until early evening, 12 times per weekday. END_OF_DOCUMENT_TOKEN_TO_BE_REPLACED