Seattle’s waterfront remains a heavy construction zone as work progresses on the long-planned multi-lane boulevard and adjoining park, but a piece of the overall Waterfront Seattle project that gets much closer to Capitol Hill hasn’t broken ground yet.

The Pike Pine Renaissance project envisions streetscape changes to Pike and Pine Streets between 1st Avenue and Bellevue Ave, with the one-way street configuration in downtown extended all the way up the hill to Bellevue. Sidewalks in several areas will be expanded. The gaps between the existing protected bike lanes will be filled in, with the bike lane barriers beefed up with more solid and durable materials. That’s the original vision, at least, and the one that was reviewed by the city’s design commission last year when the project reached 30% design on its way to planned construction in fall of 2022.

But in the latest plans obtained from the city at the 60% level of design, a key segment of the project has been scaled back. While the wider sidewalks and concrete barriers for the bike lane are still planned for the I-5 overpass on Pine Street, the overpass on Pike Street is no longer planned as much of a makeover. Instead of concrete, the barricades look to be something like plastic posts only.

Ethan Bergerson of the Seattle Department of Transportation explained the reason for the change. END_OF_DOCUMENT_TOKEN_TO_BE_REPLACED

Sound Transit is showing off the first of its $642.5 million fleet of new and improved light rail vehicles as it gears up for the opening of its latest expansion connecting to Northgate via the University District this fall.

While still seating around 70 passengers, the new vehicles are designed to be more accessible, with larger windows, more bag and storage space, and have more room for bikes with hooks doubled from two to four.

Sound Transit has announced October 2nd for the start of service on its Northgate Link light rail expansion that will open up the great northlands of Seattle including the University District, Roosevelt, and Northgate to riders from Capitol Hill Station and beyond. The opening will mean Capitol Hill rider visiting Brooklyn in only a-few-minutes ride.

With the Northgate link’s completion, Sound Transit says it is entering “an exciting period of opening major light rail extensions every year through 2024, nearly tripling the region’s light rail system from 22 miles to 62 miles.” The COVID-19 crisis, however, has slowed some progress and put some of Sound Transit’s future light rail plans in jeopardy. END_OF_DOCUMENT_TOKEN_TO_BE_REPLACED

Having already led the way on the $15 minimum wage, Seattle is poised to set a minimum rate for car services like Uber and Lyft. The Seattle City Council approved Monday a resolution that will put City Hall on a crash course studying the so-called “transportation network companies” industry in an effort to better understand the possible impacts of forcing a minimum pay rate for drivers.

Monday’s resolution sets a proposed price point of $2.40 for a minimum base fare for TNC rides in Seattle — the companies currently charge a $1.35 minimum. Before Monday’s vote, Uber and Lyft drivers and customers spoke against regulation and what they said was union-driven interference in the industry. Council president Bruce Harrell went off script to forcefully deny that the Teamsters Union is driving Seattle’s effort. END_OF_DOCUMENT_TOKEN_TO_BE_REPLACED

Mixed in with strong statements on massive social issues and a look ahead at possible economic issues on the horizon, Seattle Mayor Jenny Durkan focused on three pillars for new initiatives in her first State of the City address Tuesday: jobs, education, and housing affordability.

“We believe we are all better off when prosperity is shared and is not just for the few,” Durkan said.

In her speech delivered at Rainier Beach High School, Durkan got the biggest round of applause for her new proposal to give free, year-round Orca transportation passes to all 15,000 high school students in the Seattle Public School system. Passes are currently provided by SPS to high school students who live farther than 2 miles from school and to about 3,000 income-eligible middle school and high school students. By fall, Durkan’s plan calls for King County Metro and the Seattle Department of Transportation to fund the new program. UPDATE: To clarify, the new initiative would fund cards for about 7,000 students not currently covered by the other programs.

An important period of public comment has begun in the process to shape King County Metro’s Madison RapidRide G line for a planned start of service in 2021.

The State Environmental Policy Act comment period for the planned transformation of the bus lines on Madison across First Hill, the Central District, and Capitol Hill into “Bus Rapid Transit” runs through March 1st after Seattle Department of Transportation planners have completed their environmental review of the proposals and issued a Determination of Non-Significance (PDF) for the project.

Here’s the announcement from Metro: END_OF_DOCUMENT_TOKEN_TO_BE_REPLACED

If you have an ORCA card supplied by your employer, sorting out what you’re going to pay to ride a Metro bus is pretty simple. But, for the rest of us, King County’s fare system is, as the Seattle Transit Blog says, unfair and complex.

Metro is rolling out a survey to help shape a proposal planned to get in front of the county council by June. You can add your thoughts in the first planned survey here by April 7th. You can read what the experts at STB have to say about the plan and what is behind the effort to change the system here:

The background materials presented to the Advisory Committee convened for this project show that Metro is primarily focused on two goals: in the short term, potential elimination of zone and peak surcharges, and in the longer term, moving gingerly toward cashlessness and/or universal off-board payment. Please take the survey, and we’ll keep you updated with additional feedback opportunities as the project progresses. You may also email comments to Metro’s DeAnna Martin.

Given the tight turnaround time to get the proposal in front of the King County Council, a second survey on options for how to best shape a new fare structure will follow in April.

Metro is also holding public meetings on the fare review. The next is April 4th at King Street Station from 3:30 to 5:30 PM.

You can learn more at kingcounty.gov. 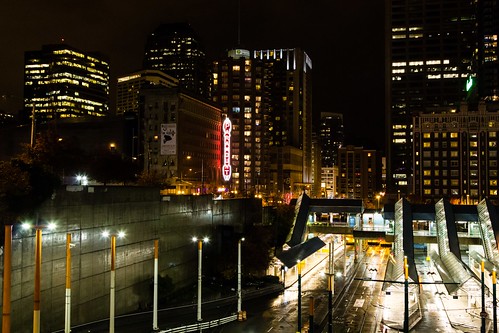 King County Metro will field public comment through October on a proposal to expand its late night bus service:

The public is encouraged to review the proposal and offer comments via an online survey until Oct. 30. Public comments will help shape a final proposal, which could go before the County Council later this year. If approved, it will take effect in September 2017.

The agency says late night passengers represent “a small portion of Metro’s total ridership,” but that demand appears to be growing, with boarding increasing “by 20 percent in the last five years.”

Details of the proposal can be found at kingcounty.gov and the full announcement from Metro is below. Across the Hill, Route 11 would see boosted service along with possible tweaks to improve transfers on other routes. END_OF_DOCUMENT_TOKEN_TO_BE_REPLACED

Just like a real big city neighborhood, Capitol Hill now has a subway station. And like a big city of the future, you can use your phone in the subway tunnels. Starting today, our subway will get another important feature — station buskers.

Sound Transit believes that allowing buskers to perform at the University of Washington and Capitol Hill light rail stations will help retain existing users, as well as attract new users, and is consistent with promoting transit-related activities. Accordingly, Sound Transit is adopting this pilot program for a 6 month period to assess the feasibility of adopting a permanent policy regarding performances by buskers.

END_OF_DOCUMENT_TOKEN_TO_BE_REPLACED

Since rolling out earlier this year, the CHH transit pass program is helping some residents save as much as $100 per month in transportation costs, a post on the program reports. This kind of savings is particularly important, CHH says, because “after housing, transportation is the second highest cost for most people” — END_OF_DOCUMENT_TOKEN_TO_BE_REPLACED

It’s been five months since Link’s Capitol Hill Station opened. Can you feel the difference? Everyone is walking towards the station. Bus stops around it seem emptier in the morning. Train cars keep getting more full.

We’re so caught up learning to dodge bicycle tires and stay upright on swaying trains, perhaps some of us already forgot that the 10 used to run to Pine Street on 15th. The 10’s reroute is linked to the return of rail service to Broadway for the rest of time.

This view below from 1970 strains to look back to the end of Capitol Hill’s original rail service. The coach pictured here was Seattle Transit #615. That bus was purchased in 1940, the year after Seattle Municipal Railway was rechristened Seattle Transit and embarked on the destruction of the streetcar system. Seattle Transit purchased 100 coaches from local company Pacific Car and Foundry (now PACCAR) and 135 from Twin Coach.