Despite national controversy and local concerns about diversity and respect for annual MLK Day actions and celebrations, a third year of January marching and organizing for women’s rights activism is coming to Seattle with Cal Anderson again an epicenter of action in only a few short weeks.

Liz Hunter-Keller, the communications chair for Seattle Womxn Marching Forward, which organized the inaugural march in 2017 and has continued to shepherd anniversary events, estimated that 50 to 70 organizations are involved in making this year’s Seattle Womxn’s March a reality.

“There has to be more work and more connection, and more love and more understanding and that comes from deeper experiences, like the ones we’re going to try to provide at Seattle Center,” Hunter-Keller said.

The Seattle events haven’t been easy to pull together. The 2018 Women’s March in Seattle was planned by another group as officials and organizers were unsure how many thousands to expect on Capitol Hill. END_OF_DOCUMENT_TOKEN_TO_BE_REPLACED

UPDATE: A few thousand filled the grass bowl at Cal Anderson and then E Pine for a march to the Federal Building Thursday night in a rally and protest against the Trump administration’s latest moves to thwart an investigation into Russian influence in the 2016 election.

The night’s protest was part of actions across the country as some 100,000 reportedly marched in various cities across the U.S.

Flags were a common sight Thursday night as the march made its way off the Hill (Images: CHS)

“I’m Jay Inslee and I’m the governor of a state of seven million people who insist on the rule of law to protect the United States Constitution,” Washington’s governor said as he spoke to the crowd just after 5 PM inside Capitol Hill’s central park.

“What we are doing tonight is speaking out early against a repeated unconstitutional fearful acts of a president who feels cornered,” Inslee said. “Because what we have seen in the last several days is the Americans speaking out to a United States House of Representatives that will finally hold him accountable.” END_OF_DOCUMENT_TOKEN_TO_BE_REPLACED

7th Congressional District Rep. Pramila Jayapal spoke with over 100 constituents Thursday evening at The Summit on Pike as part of her ongoing efforts to get out the vote and boost campaign donations across the nation ahead of the November 6th midterm elections.

The Democrat spent the previous four days in four different states stumping for candidates challenging Republican incumbents including Ohio’s Aftab Pureval, the first Tibetan American running for U.S. Congress, and Kara Eastman in Nebraska. Jayapal was planning next to visit Los Angeles and New Mexico, among other places, to try to help boost chance of a Democratic majority in the House of Representatives following the critical midterm vote.

Jayapal said she was asked if she was exhausted. “I said ‘yeah, maybe, I haven’t really given myself the time to think about it’ because you know what, I will be more exhausted if we don’t flip the house,” Rep. Jayapal said. “So I’m going to do everything I can to flip the house.”

Chances are, this weekend is going to be hugely depressing. If you want something to look forward to and need to plan for better days ahead, consider making some time next Thursday night to spend with Rep. Pramila Jayapal (D) as she visits our Capitol Hill for a Don’t Agonize, Organize Town Hall:

The Thursday, October 11th session at E Pike’s The Summit will be a time for “your questions, comments, and concerns,” as Jayapal and the crowd “discuss what is at stake in the November 6 midterm elections,” –- “and how we can make change,” the promo adds. END_OF_DOCUMENT_TOKEN_TO_BE_REPLACED

Some of the thousands who marched for women in 2018

UPDATE 9/26/18 1:55 PM: Organizers from Womxn’s March Seattle say they are working with the groups that hold the city’s annual Martin Luther King, Jr. Day march and rallies to coordinate on an event in 2019 that brings the two efforts together with respect for both and without overshadowing either cause.

CHS reported previously on a 2019 plan for a Sunday march starting in Cal Anderson but that event does not have the support of Womxn’s March Seattle which has been key in driving the past events. To eliminate confusion, CHS has removed details of the un-supported Sunday march. We apologize for adding to any confusion around the 2019 march.

Liz Hunter-Keller tells CHS that the weekend is still being shaped but that a “super group” of activists and organizations has been working on the plan and will announce participants and details soon. As it did in 2018, Womxn’s March Seattle is planning a Saturday of workshops and activism before next year’s event planned for Monday, January 21st in conjunction with the annual MLK celebrations and march. END_OF_DOCUMENT_TOKEN_TO_BE_REPLACED

In a show of unity and solidarity just days before the nation’s Independence Day holiday, thousands of demonstrators gathered Saturday at the SeaTac Federal Detention Center to rally against current immigration policies, the mistreatment of immigrant families, and to protest the Immigration and Customs Enforcement (ICE) separation of children from their parents.

Waves of families and activists poured off the light rail at Angle Lake station near Sea-Tac airport, and filled the street in front of the detention center while guards and cameras watched the crowd from the rooftop.

The Families Belong Together rally, a nationwide coordinated day of action, kicked off a week of activity directed at ICE treatment of immigrants and the Trump Administration’s immigration policy. The event at SeaTac brought together an estimated 6,000-8,000 people, including unions, veterans, human rights organizations, elected officials, and community members.

END_OF_DOCUMENT_TOKEN_TO_BE_REPLACED

The March for Science returned to the streets of Capitol Hill this weekend with a focus on the underrepresented voices in its call for evidence-based policies in Washington D.C.

“We also can’t understate the importance of diverse perspectives and experiences in science,” Rep. Pramila Jayapal said before calling out a roster of those voices. “How many know about Mamie Phillips Clark, the first black woman to earn a doctoral degree from Columbia, whose research on racism was vital to the Brown v. Board of Education decision?” END_OF_DOCUMENT_TOKEN_TO_BE_REPLACED 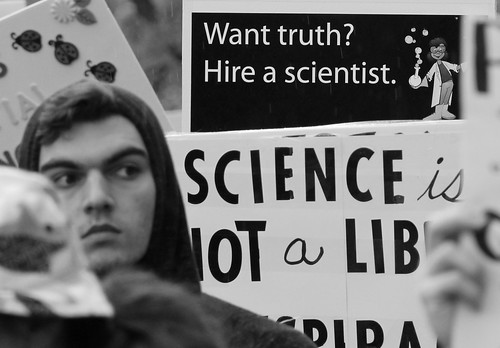 Speaking of Seattle’s robust roster of free speech events, Cal Anderson Park will, again, be the center of the Emerald City’s resistance Saturday. This time, the scientists are back:

The 2018 Seattle March for Science starts Saturday morning in Cal Anderson with a march to Seattle Center slated to step off at 11:30 AM. Last year, more than 25,000 people marched, organizers say. “One year later, despite significant successes, science and evidence-based policy are experiencing an ever-increasing assault by the current administration,” they write.

While the city is sorting out how to better cover the cost of policing its major events including rallies and marches, there is also some concern among local merchants around Cal Anderson Park about the resources available to help out when huge crowds descend on the public space and fill Capitol Hill’s streets. The Capitol Hill Chamber of Commerce recently brought business representatives together with representatives from City Hall to talk more about the issue and what resources could be made available to help.

For the thousands hoping to come to Capitol Hill for the January 20th Seattle Women’s March, we have two words for you: light rail.

In 2017, officials believe more than 120,000 people marched from the Central District’s Judkins Park as part of the march, the city’s contribution to women’s rights marches across the country in the wake of Donald Trump’s election victory. But, to be honest, they’re not sure. It was impossible to count. In 2018 with a year since the election passed and with some advocates saying it is time to move beyond demonstrations, nobody knows how many thousands will gather January 20th on Capitol Hill for this year’s rally and march.

Organizers and city officials are preparing and gathered Wednesday to plan for how to help those thousands get to and march off of Capitol Hill in the smoothest, safest, most First Amendment-y way possible. END_OF_DOCUMENT_TOKEN_TO_BE_REPLACED

Seattle Mayor Jenny Durkan says her police department will not be part of any crackdown on the city’s legal pot businesses as reports spread of a plan to rescind a federal policy that has been key to state legalization.

“Let’s be clear: Our Seattle Police Department will not participate in any enforcement action related to legal businesses or small personal possession of marijuana by adults,” Durkan said in a statement released Thursday morning in anticipation of the planned move by Trump administration Attorney General Jeff Sessions.

“Federal law enforcement will find no partner with Seattle to enforce the rollback of these provisions,” Durkan said in the statement. “I have full confidence that Seattle, our Attorney General, and our Governor will lead to ensure our businesses, residents, and visitors are protected from this overreach.” END_OF_DOCUMENT_TOKEN_TO_BE_REPLACED