23rd Ave is getting some serious stormwater improvements from @SeattleSPU pic.twitter.com/bF3C1xmO2K

The Central District’s long neighborhood nightmare is almost over. The 20-month project to overhaul a busy section of 23rd Ave is on track to finish in February 2017.

Final paving at 23rd and E Union is scheduled to be completed next weekend, weather permitting — though, it was already pushed back a week due to rain. Crews will also continue to work in the area through February to rebuild sidewalks, install electrical components, and complete finishing touches like landscaping and signage.

During that time northbound 23rd Ave will remained closed from E Union to E John. The full northbound detour, which sends traffic to MLK Way, will stay in effect through early 2017. Starting next week, crews are also scheduled to commence several weeks of road work at E Olive, which will include moving the 48 bus stop about 200 feet south on 23rd Ave.

After that, Central District-proper should be in the clear, but 23rd Ave as a whole still has a way to go before the upheaval is over and the full benefit of the major infrastructure investments are realized. Late next year, work will move to the avenue’s outer reaches for Phases 2 and 3 of the improvement project, which still do not have a definitive timeline.

23rd Ave has been plagued with traffic accidents, potholes, and traffic congestion for years. The aim of the $43 million project is to transform the street into a new configuration with a center left-turn lane and improve the pedestrian and sidewalk experience along 23rd Ave spanning Montlake, Capitol Hill, and the Central District.

Crews also finished replacing a 1.5-mile water main early this year which included digging a trench along 23rd Ave and required some of the project’s most intense construction.

Phase 1, covering Jackson to John, began in June 2015 and was expected to take 20 months. The entire corridor overhaul from I-90 to Montlake has a targeted a 2018 completion. Work on Phase 2 (S Jackson to Rainier Ave) is expected to begin in late 2017 while work on Phase 3 (E Roanoke to E John) does not yet have a start date. Design work has not yet been finished on either phase.

A parallel Central Area Neighborhood Greenway is practically complete, with street safety features added to residential streets just off 23rd Ave to improved bike and pedestrian access through in the corridor. The greenway’s 23rd Ave crossing at Columbia now includes a traffic light and greenway markings.

Still unfinished is the greenway around Interlaken Park to provide a clear path for pedestrians and cyclists to and from Montlake.

“Currently there are ‘Greenway Ends’ signs on either end of the gravel trail that connects the two streets, with no guidance for people on bikes who want to continue on the greenway route to Montlake,”said David Seater, of Central Seattle Greenways. “It’s especially frustrating since SDOT installed a protected bike lane for one block on Boyer that connects directly to a set of stairs.”

The project has also surprised a few people with new public art — a part of the work that got a bit lost in the shuffle given all the elements of the new streetscape.

Meanwhile, businesses along 23rd Ave continue to weather the construction with cash assistance from the city. In February, CHS reported on the $650,000 funding package assembled by the Mayor’s office and the Office of Economic Development to quell growing frustrations over the project. The first checks were cut in April.

25 businesses were identified by the Office of Economic Development as eligible for construction mitigation funding. So far, 21 of those have received an average of $25,000, totaling $516,000 along with one-on-one business consulting.

All but one of the businesses has consistently remained open since mitigation funding was distributed. First Cup Coffee, the small 23rd and Union stand run by Nop Zay, has been open sporadically in recent months.

As for what will happen with the remaining $134,000, An OED spokesperson tells CHS the city is still evaluating how to spend the funds.

CHS looked at the requirements on the stabilization program shaped by federal constraints that limited the types of business allowed to part of the financial mitigation. To be eligible, businesses must be located within a zone around 23rd Ave between E John and S King and 21st and 25th Ave, and must have been established before the start of the construction project. They also much be small businesses with five or fewer employees — including the owner.

The federal grants behind a portion of the payouts added further limits requiring a majority of customers in a “service area where the total resident population is predominantly low and moderate income,” or owners with household incomes below 80% of the area median income. Finally, the business owner must show revenues have decreased since the start of construction.

You can learn more and keep track of updates on the 23rd Avenue Corridor Improvements Project page. 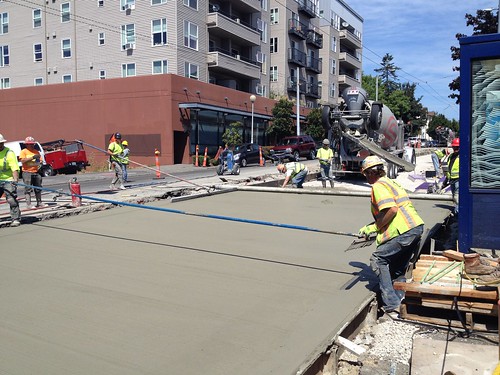 I hope they’re planning to move the westbound bus stop at 23rd and Union as well. The bus almost never clears the intersection when making the left onto Union from 23rd, leaving it blocking the traveling lane and jamming up the entire intersection.

The 48 was only temporarily turned left onto E. Union due to construction. Soon it will continue north on 23rd and the west bound bus stop will be used by only the 2 as usual.

This has been a very expensive project which seems to never end, and will go on for at least two more years….the segment in Montlake will cause traffic nightmares, especially in the area just south of the 520 interchange, which is already very congested. I hope it will all be worth it.

Investing in our infrastructure is expensive and timely, which is why our country is literally crumbling beneath us. To answer your last sentence: of course it will be worth it; it’s never good to let a major arterial fall apart.

This is taking forever. Its really a shame that so much time and money is being spent on this when there were quicker/cheaper options.

The quality of our roads is horrible yet we’ve put so many eggs in this one basket.

Myself, SDOT, WSDOT, USDOT and pretty much everybody that knows anything about infrastructure would love to know how this could be done cheaper and quicker. 23rd needed to be rebuilt. If you let it fail, you’re affecting a large area and a large population.

The implemented option was the only one on the table? I think not!

Truth – SDOT could have forced Merlino construction to stick the plan that they presented to the community for 2 years. The whole thing went off schedule almost immediately and the community had to suffer the consequences. The plan was to do the project in three zones. That went out the window almost immediately and a shit show ensued. Merlino used 23rd as a parking lot and staging area until they finally rented the old Key Bank site and 24th and Union as a staging area. SDOT is not accountable to anyone and Merlino seems to have free reign to do whatever they want. I was involved in the community planning process for years prior to construction and am still scratching my head wondering if it was all just window dressing to show some sort of community input.

I agree with the commenter who criticized Merlino construction. I walk across 23rd every day on my way to work, and the crew members spend a lot of time standing around talking. They also frequently smoke while they are working. It appears that they are intentionally working at a slow pace. Also, it is ridiculous that the street has been dug up and re-paved multiple times. This project needed to be completed; however, it could have been done in a more efficient manner.

OK, citycat, but have you ever seen a construction crew that ISN’T slacking a lot of the time? (especially SDOT and WSDOT crews). Merlino is only one of many.

I love the new neighborhood greenway, the wider sidewalks, and the better pavement. The long construction has definitely been a pain though. Hope the 48 rapid ride project that was promised to the neighborhood as part of the Move Seattle levy moves forward soon.

Keep in mind these minority-owned small businesses had to fight for ANY mitigation money after the Mayor insisted it would be impossible to give them any. Meanwhile, $15M was given to waterfront businesses dealing with construction. And most of these CD businesses continue to struggle – $25K is nothing when the construction has been going on for 2 years – and the community was misinformed about how it would be rolled out. What happened to the supposedly mandated Race & Social Justice Initiative? This is city-sanctioned gentrification and displacement of a traditionally low-income community of color at its finest. And the timing – how convenient for all the luxury, market rate developers swooping in.

Paul
Reply to  BC

The businesses on the waterfront were completely inaccessible due to the construction and had to be closed. Not the same thing at all. If 701 coffee or anyone else affected on 23rd was on the waterfront they would have gotten paid for staying home and watching Netflix.

Are you implying that the displacement/gentrification is the side-effect of poor planning or the goal of the planning? If you think there is some conspiracy here to displace these businesses you are no better than a Trump supporter… just the other side of the coin.

BC
Reply to  apples and oranges

HAHA…nice try. Somehow equating an observation about the squeezing out of small businesses of color to a Trump supporter is really grasping at straws. Just because the election is relevant doesn’t mean you are. And talk to any small business owner or how about just google one of the many articles that shows their businesses greatly suffered as a direct result of lack of traffic and access from the construction. And whether this clusterf*ck is a result of poor city planning or intentionality doesn’t mean much at the end of the day…the result is the same – that small and minority-owned businesses are being displaced. It’s the impact that matters, and the city is culpable either way. This could have been mitigated if a race and social impact analysis was applied, like they’re supposed to.

@BC, my point is if you think rifting these businesses out is an *intentional goal* of the project then you you believe in conspiracy theories… much like a Trump supporter that believes the election is rigged, that’s all.

“This is city-sanctioned gentrification and displacement of a traditionally low-income community of color at its finest.” Not quite.

At it’s finest would be if the city decided to intentionally rift these business out so the land could be re-developed… as in that was one of the goals… an actual conspiracy. But this is not the case. This is just an example of how complicated projects are hard to plan and harder to execute… not to go into if the city has the skills to pull his off in any form that would be considered optimal.

I don’t disagree that businesses have had a very hard time because of this project… just not an intent.

Again, the waterfront businesses received money because customers could *not* get to the businesses… not because it was merely more difficult.

Complaining about the workers is not productive. They get to take breaks and sometimes have to wait to perform a function until another is complete. I wonder how many of those criticizing the workers have ever done physical labor. Focus on the planners and policy makers who actually had power to plan it successfully.