Thursday brought the release of the annual state of the district reports for Seattle Public Schools including individual report cards for the elementary, middle and high schools serving many Capitol Hill students. As usual, the reports for the area schools were a mixed bag but Capitol Hill can boast at least once success during the 2011-2012 school year.

The Seattle Times takes a look at the overall performance of Seattle Schools here:

In a state-of-the-district talk Thursday, Seattle Public Schools Superintendent José Banda focused on the progress that’s been made, even though the goals won’t be reached.

Since last year, the district has improved in about half of the target areas. Since 2008, when the five-year plan started, the district also has seen substantial gains in a handful of areas, especially in math.

On the other hand, the district will fall short of each of the 23 objectives it set in 2008. The Times doesn’t really get into the massive transition Seattle Schools has gone through with its shift to the neighborhood school concept. The Boston Globe noticed, however, and points at Seattle as a possible model for change.

Around Capitol Hill, each area school turned in at least a mid-tier performance in 2011-2012 except two. The NOVA alternative high school housed on the Meany campus turned in a “Level 2” showing based on slippage in a variety of metrics.

Meanwhile, Stevens Elementary couldn’t keep up with lofty goals and turned in a Level 2, according to the ratings. Most of the rest of our public academic youth institutions tallied Level 3 showings — indicating schools not quite making academic goals but not quite failing them completely, either.

Lowell Elementary signed in as the star pupil with its 2011/12 performance classified as Level 4. Of course, it was up against a softer set of academic goals for the year compared to its Stevens cousin. But hey, we’ve all earned a soft B+ before, right?

The state of the district also turns up some big numbers. Seattle has a big job on its hands educating thousands on a relatively modest budget of around $11,800 per student:

We’ve embedded some information from the district on the ratings and each card for the schools around the neighborhood. You can expand the view to full screen to read the card or download the PDF files and the full district report here. With Seattle’s move toward neighborhood schools making it more and more likely that students attend a public school near their home, we’ll call these Capitol Hill schools — regardless of their physical locations. 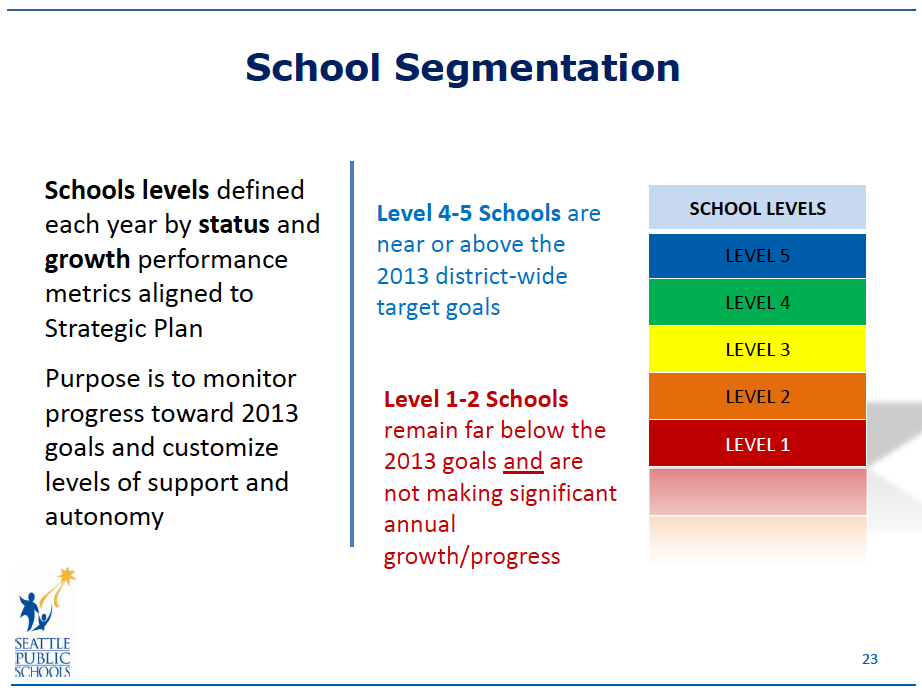 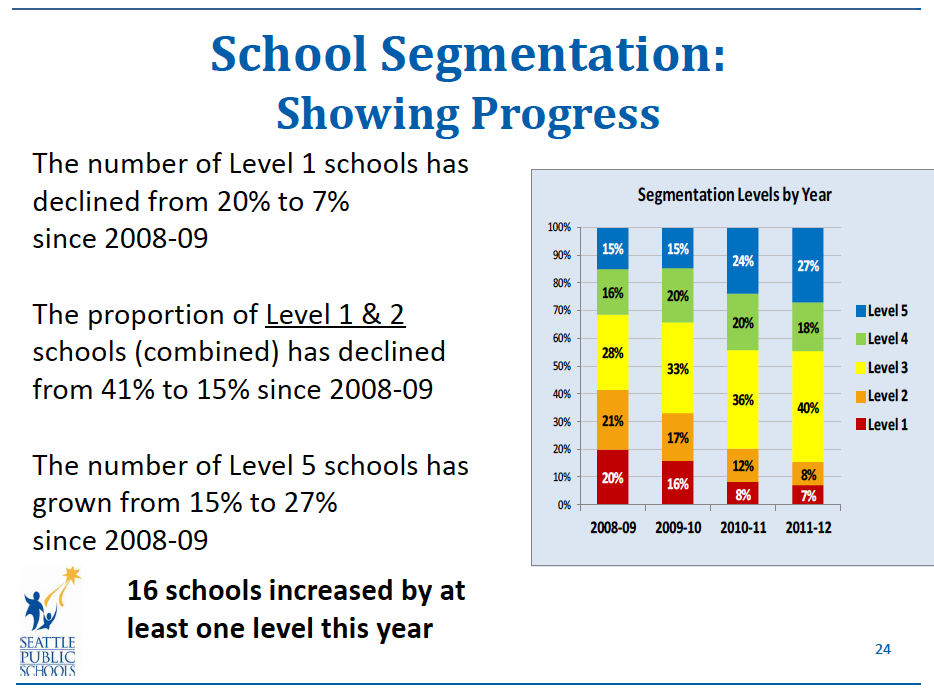 Lowell got a 4 because it included results from the APP program now in Wallingford. The reporting for Lowell means nothing. Not the school’s fault. The district’s. Bad record tracking.

If TT Minor reopens it will be interesting to see what happens to Steven’s score. Stevens used to be a strong program until SPS Central Office mucked it up by overcrowding the school and sending many of the families of means in other directions.

TOPS K8 on Boylston which also draws from Cap Hill appears to have gotten a 4, up from a 3 last year when it was recovering from a horrible principal placement from SPS central office. Their 4 seems a compliment as the population has a strong English as second language component and families of poverty.

Public School Parent, I am glad that you spoke up regarding the inaccurate facts about Lowell. It has been at least a year or more that many have wanted facts about that school. APP left last year, and yet the District never separated the data at least for public consumption. District staff are good smart people who could easily do this if their boss/es requested it. Some of the students at Lowell are the refugees from TT Minor. How are they being served?

Regarding mucking things up for Stevens, at least you still have all of your schools no matter what the enrollment. Really though, I want to stick up for all my neighborhood families that were drawn into the Stevens assignment area. I don’t think we are the dregs of society that you believe us to be. We are neighborhood of various means, smart people, and hard working people who actively engage in our community. Things may or not be mucked up, but I hope you are willing to rethink how they are mucked up.

I appreciate the story, but as PSP and Joanna rightly point out, these scorecards don’t often reflect accurately the success and challenge of our school programs. Last year Nova received two Washington Achievement Awards from the state OSPI- special recognition for their success with extended graduation rates and closing achievement gaps. Plus the school had 3 writers honored ACT’s young playwright program, placed first in the district’s art show, sent poets to California… Yet as an “alternative” school, with a philosophy and pedagogy unique in the district, Nova’s score will decline each year it does not enroll students in traditional AP or IB classes, which it does not even offer.

Anyone interested in learning about a school should make time to visit or attend an event. Nova hosts a craft fair Dec 6th. You’re invited!
http://novaproject.my-ptsa.org