Though rests isn’t quite accurate. The (probably) almost 100-year-old sign still works. Still does its job of telling you that you are on ‘E. Olive Pl.’ near the corner of Melrose. Hill shutterbug and frequent contributor to the CHS Flickr pool Rob Ketcherside recently added this picture of the old sign and his research into its origins. He graciously permitted us to share his work on CHS. 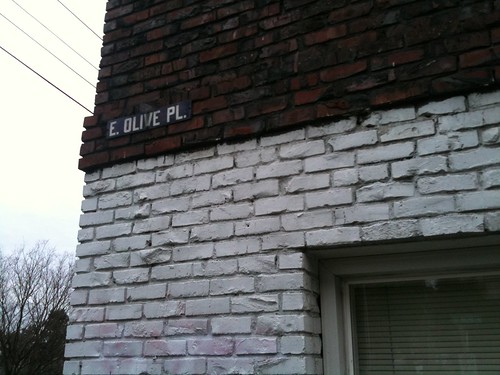 Hanging on the corner of the Celeste Apartments, this is a good candidate for the oldest street sign in Seattle.

Nestled in this forgotten armpit of Olive Ways and Places and freeway entrances is our aged sign.

Seattle does not put street signs on buildings anymore. There’s one just left of the “G R” text in this pre-1909 photo of 2nd and Columbia. Older style font than this, but our signs haven’t been white on black for a long time, either.

The Celeste Apartments, like so many Capitol Hill denizens, underwent a sex change at some point. She was built as the Allen Apartments. And just to muddle matters, he was at the corner of Melrose Avenue and then-known-as OIive Street. The year, 1908.

And, with nothing else to go on, I’ll venture that the sign dates from those early days.

(To be clear, I’ve only established a “no older than” date. Find me another white on black street sign though!)

We asked SDOT about the sign but the department could not provide information about the specific sign. They did point us to some useful background on the “oldest sign” question, though. According to “Public Works in Seattle, a Narrative History of the Seattle Engineering Department 1875-1975,” the first porcelain enamel-on-metal street name signs with white letters on blue background appeared in the Central Business District around 1922. Wooden signs of the same color predominated throughout Seattle until about 1952. According to the book, most of those were attached to wood posts or to existing utility poles.

At this point, we have no information indicating when the enamel-on-metal signs were phased out. But Ketcherside’s sign probably does date from the early 1920s. We’ll have to hold a big party in 2022. But, then again, why wait?

I’ve always wondered about the signs on the corner of 11th & E Pike… any idea what year these are from?

“Public Works” must have been referring to the first street signs added by the city – the book’s author a city employee who was an avid historian. There are older street signs visible downtown in this photo for example pre-1909, http://content.lib.washington.edu/u?/warner,633

Thanks for adding the target, I bet it is from the mid-1920s.

Beautiful, thanks for sharing! The building dates from 1912. So these could have been added by the building owner before the city started adding signs (1922 per “Public Works”).

If you look at old photos of Seattle, like in the Seattle Municipal Archives Flickr pool, there are almost no street signs around 1900. The only way to figure out where you were seems to have been business signs, which often listed the building number and street.

The street sign pictured appears to be blue-and-white, not black & white. Could you explain what’s going on here? Optical illusion?

I tried to do a google search to find some history, but wanted to find where the “system” that’s used in Seattle/King County started e.g. center of the city uses no directional, going to Capitol Hill streets have “east” designation while going to Queen Anne you have either “west” or “north” designation and in West Seattle most everything is “SW.”

Interesting. From my travels I have not seen very many street signs posted on buildings in the United States, but I’ve noticed it’s pretty common in Europe and Latin America. Something about these photos makes me wonder if there is a general point at which it started falling out of fashion nation wide, or if it was always pretty rare here.

Within the next couple weeks:

1. Someone will steal it
2. The city will take it down

Long ago, all the streets in this area were designated as either “no directional” or “north” some of the corners still have the brass letters embedded in the concrete showing the “N” instead of what we know now as “E”

I’m surprised that all still exists anyway. When the I-5 construction was going on, Olive Place was the way only way across the trench of a freeway hole for quite a distance. The state could have easily torn it all out and we wouldn’t have a cool picture today

The city won’t take it down. Hope nobody steals it.

http://en.wikipedia.org/wiki/Street_layout_of_Seattle#Direct which I started, is your friend.

Beat me to it :)
I spent most of the past decade living in various places on Bellevue and Olive, and figuring out East vs not East in that area REALLY isn’t that hard.

The blue-on-white appearance was caused by my iPhone lens.

Ironic, this is the first photo I’ve posted with my iPhone in months. I’ve been waiting for nice weather to go down with my real camera, but the planets haven’t aligned yet.

See http://clerk.seattle.gov/~public/street_desig.htm for a pictorial explanation of the directional boundaries.