Given the continued struggles of the United State Postal Service, we’re not sure which is the bigger news: the Broadway UPS Store expanding or a new fish and chips restaurant opening on Capitol Hill. Who are we kidding, right? Here’s everything you need to know about what’s next for the Broadway UPS Store. And I guess we’ll tell you a little about those fish and chips, too. 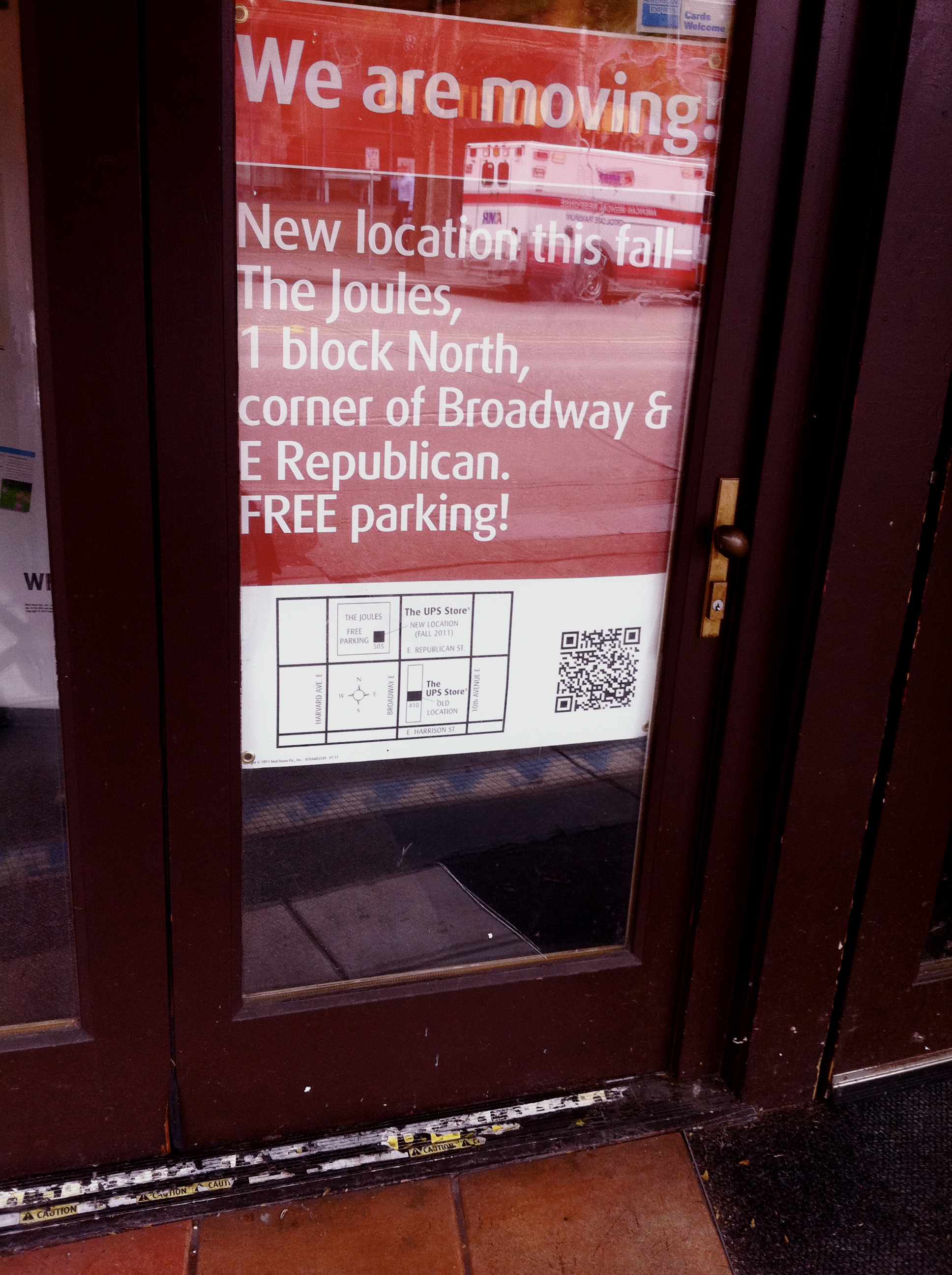 By this fall, Naresh Bhatt will have moved his package delivery and printing business across the street to the Joule building in the third retail unit north from Republican. For Bhatt, the decision really came down to one thing.

“The store was doing OK,” Bhatt, who also owns a downtown UPS location, tells CHS. “After I took it over, it started doing a little better. I run a very nice operaiton and my employees and have a lot of power. I streamlined. My manager Daniel has been there for 6 years — he runs the business. But we have realized that having parking would be a tremendous asset.”

For Bhatt, the 458 parking stalls at the Joule will hopefully make his franchised store even more vital to local businesses and, increasingly, he says, residents. 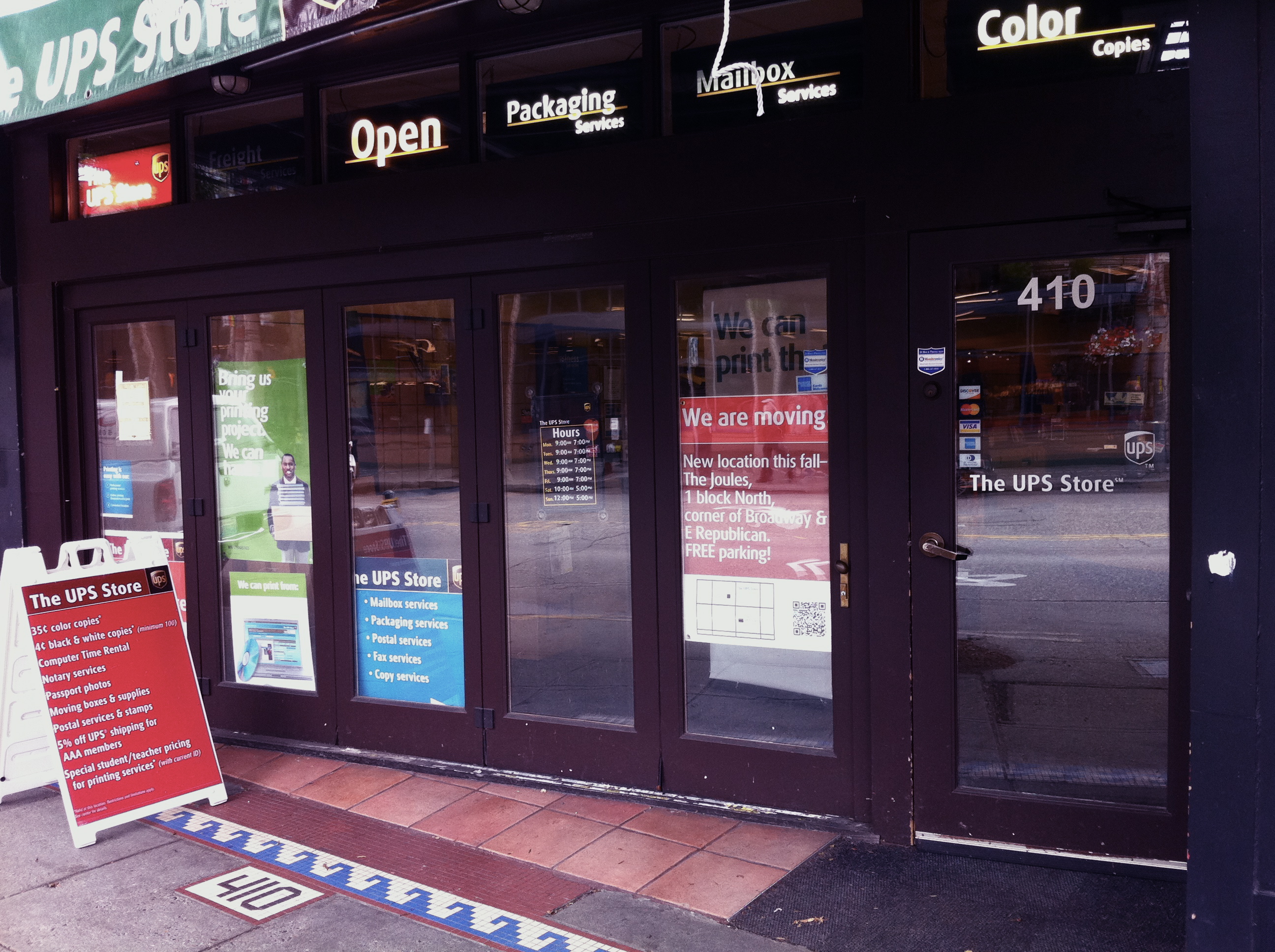 “Capitol Hill is a very transient place — if you’re just moving your stuff, ship it. UPS can move you very inexpensively across the county. We do all sorts of postal work,” Bhatt said.

It’s a good pitch. Almost as good as this.

“Five Fish Bistro will be a fast casual restaurant featuring a classic favorite, fish and chips, but with an upscale twist,” new Broadway restauranteur Garnet Alexa Pitre tells CHS. “As the name implies, we’ll feature five fresh fish daily. The menu will be prepared in-house from scratch and based on culinary traditions, well-seasoned and carefully prepared.”

Pitre’s Five Fish will move in as soon as Bhatt’s UPS Store moves out. Then work on the planned overhaul with a $150,000 construction budget can begin. Pitre says to expect a touch of the sea on Broadway.

“We’re excited about being in the Capitol Hill neighborhood, which we chose because it’s a vibrant market for a restaurant of this type,” Pitre writes. “We’re in the process of designing the space with warm and inviting wood and sea tones.”

For non-fish eaters, Five Fish will feature hot pressed panini sandwiches and salads. Pitre brings years of experience in the restaurant business to the 410 Broadway E project including the most recent stint at the downtown Westin Hotel’s Coldwater Bar and Grill. “After working for Wolfgang Puck, the Two Hot Tamales and lastly for six years with the Westin, I decided I wanted to return to my passion for cooking and run my own restaurant,” Pitre writes.

Five Fish will join the well-loved Pike Street Fish Fry as dedicated providers of Capitol Hill fish and chips though some will vouch that local taverns and some old-time favorites like Charlie’s on Broadway serve up their favorite renditions.

Look for more details through the end of summer and a mid-fall opening for Five Fish.

By then, Bhatt and his four employees will be happily ensconced at the Joule. It’s an exciting time for Broadway, Bhatt says.

“This whole area is revitalizing. I know this area is going to become more and popular. It’s tremendously great now.”

You can learn more at http://www.theupsstorelocal.com/4967/

A new eatery that *isn’t* thai, sushi or a noodle house!
We need a bit more diversity of cuisine on the hill!

Sounds good. Love fish and chips, but I think this side of the neighborhood could use more “plain and cheap”, vs. “upscale and trendy”, IMHO.

Agreed. I am so sick and tired of “classic (blank) with an upscale twist”. Sometimes it works well (Skillet!) but honestly, this market is lousy with upscale twists on common food. What the Hill needs is an honest to god diner with prices that match that classic cuisine.

I do realize, of course, that rents are too high to support such a thing on Broadway anymore, but I do wonder how long this overpriced comfort food trend is going to last.

I think the upscale side of it comes from the landlord gouging on rent. I can’t wait to try the fish n chips though. I used to really like what the Broadway Grill served before the change in ownership.

Agreed!
This city needs real honest eats for real people.
Enough upscale, unless you want to make this part of the city some stale yuppy town.

I think its about time a Fish n Chip place comes to Broadway Capital Hill area. Don’t have to travel to the water front or some other lake front to get it. Close to home, walking distance. By the way, as long as it tastes good, fish n chip with an upscale twist is fine with me. Bring it on. Sounds like they will have more than just fish as well. Looking forward to some variety on the Hill. Burgers, Sushi, Mexican, Thai, Teriyaki and now Fish n Chips. Can’t get more Seattle than that.