In a session that embodied the challenges — and, at times, the opportunity — inherent in the set of rules governing Pike/Pine’s Conservation incentive program, the East Design Board agreed to move the 1020 E Union project forward in the Seattle design process Wednesday night despite concerns that the developers still aren’t doing enough to earn the preservation bonuses they plan to claim.

After a marathon, three-plus hour session, the board agreed to a compromise — move the process forward to the final “recommendation” stage so the developers can begin important permitting work but make it clear that the next stage is likely to be drawn out as specifics of the project and its developer’s request for building to an extra story of height are banged out.

The board, it was clear, is still working things out after being charged with even greater responsibility “to make the retention of existing character and structures a strong priority.” 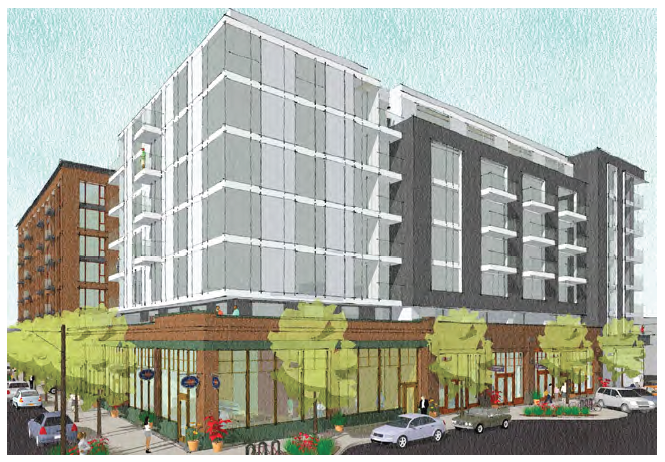 “It may take us some while,” one member of the East Design Board said Wednesday.

In March, the board kicked the first plan for the project back to start over in the process saying the proposal didn’t do enough to “maximize preservation.”

Arguing that the only way to save the Davis & Hoffman would be to kill it in their return to the Early Design Guidance project Wednesday night, the developers and architects behind the 1020 E Union project walked through their proposal documented by CHS earlier this week that calls for the preservation of two historical buildings on the block between 10th and 11th along Union — and the demolition of two others.

Their position: Preservation of the Davis & Hoffman/Pravda building would be so invasive as to ruin the character of the structure. Preserving the building would be “very expensive” compared to “what we traditionally do,” a structural engineering expert testified during the presentation.

The developers presented a plan that would replace the building at 10th and Union with a seven-story brick structure as part of the mixed-use apartment project on the half-block of Pike/Pine. The extra “bonus” story would come thanks to preservation of the facades along the corner of Union at 11th. It’s within the rules of how the conservation incentive program is designed to work. Probably.

Wednesday night, developers Alliance Realty Partners and Ankrom Moisan Architects took the unusual step of booking both of the available East Design Board slots as they presented the results of requested studies showing the feasibility of preserving the structures they plan to preserve and the structures they plan to demolish. Alliance chose not to not show a proposal and the zoning departures needed for a plan to preserve all of the old structures on the parcels — something the board gave the developer the option to do in the next and final round of the review process. It seems unlikely Alliance will take the board up on its offer.

Moving forward, a sticking point for the developers will be an exception to zoning rules they are seeking that will allow them to build the structure that will replace the Hoffman & Davis building at 10th and Union to seven stories. Without that extra story, Alliance could decide to abandon its plan to preserve additional facade along 11th Ave.

Prior to the decision to move the project into the recommendation phase of design review, representatives from the Pine Pike Urban Neighborhood Council presented a letter to the board outlining their opposition to the plan presented Wednesday night. “Community outcomes should not be sacrificed because a real estate deal was struck that may not be in line with the local market or realistic for this site,” the letter states.

Some on the board also weren’t satisfied with the depth of preservation in the Ankrom Moisan proposal presented by principal Mack Selberg. “If you only need to save the two buildings to get the height, then you would save the two that are the least expensive,” noted one board member.

The four structures being considered in shaping the project are the 10th/Union Davis & Hoffman building (#03 in the proposal) currently home to Capitol Hill Housing and the Pravda events space, the Engler Car Repair building at 11th and Union (#02 and #04) currently home to Madison Park Group offices and the Union Garage on 10th (#01). 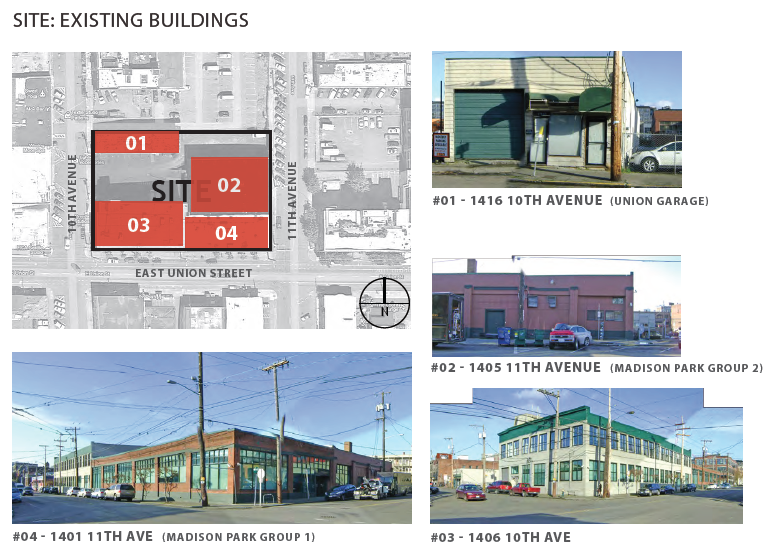 The public comment portion of the meeting revealed a mix constituency with many calls for deeper preservation — and a few saying they were satisfied enough with a plan that retained two of the old structures.

Neighborhood activist Dennis Saxman pointed out some inconsistencies in the Alliance proposals. “Their rationales are not consistent across the plan,” Saxman said, pointing out the architect’s concern that the facade design wouldn’t be respectful for the Davis & Hoffman building, but Alliance’s lack of concern for making design changes on the Engler building. 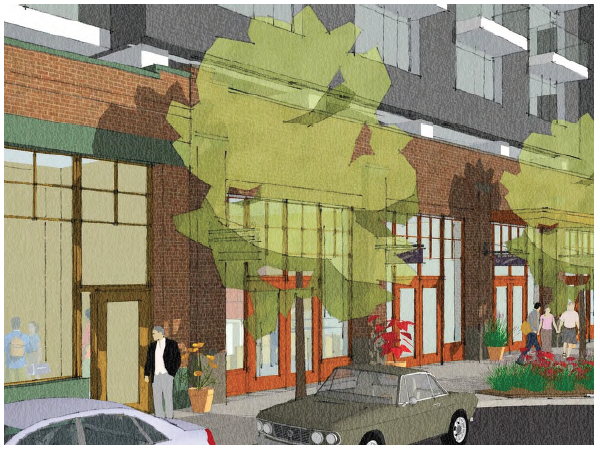 A closer look at the future of 11th Ave (Image: Alliance)

Cathy Hillenbrand of PPUNC said she was worried about what might come next. “This is a really important precedent,” she said.

Others were also concerned that the developer was exploiting a soft spot in the Conservation Overlay.

“The incentive to gain the extra floor [requires] that you are going to spend extra money to keep the storefronts the way they were before,” Brad Augustine of Madrona Real Estate said. “The key is to preserve all of it — as much as you can.”

“Granting the additional height on a building that is getting torn down — I’m sure the irony is not lost on any of us here,” said John Feit, architect at Schemata Workshop and CHS contributor.

Mike Oaksmith of Hunters Capital said he also hoped to see a plan that included the Davis & Hoffman building. “It was a pretty darned cool building,” he said talking about the building’s appearance in its early days.

Not everybody agreed that the Davis & Hoffman/Pravda building needs to be saved. Some called it “not remarkable” or “replaceable.”  Mike Meckling, owner of nearby Neumos and a roster of PIke/Pine businesses, said he supports the project. “The building that is Pravda doesn’t really stand out,” he said.

Another speaker who said he supports the project overall said he would like to see something more creative done with the project’s large northern wall.

“We kind of all mourn the Pravda space,” said Reno Tripiano who works nearby. He also said he was a supporter of the project.

Seattle’s entitlement process and design review compared to most major cities is a complete joke. Tonight’s action demonstrates that the Pike Pine Conservation Overlay is a complete and utter failure – developers get a valuable extra story and all they have to do is keep a wall up. It would be funny if it wasn’t so pathetic.

The Design Review Board is completely and utterly toothless – and without balls. The East DRB is stacked with architects and real estate professionals who are completely loathe to deny any project for fear of biting the hand that feeds them – and potentially offending a future potential client. Of the 6 East Design Review Board members, 2 are architects, 1 is a real estate developer, and 1 is an architect in training. In any other city, that wouldn’t even pass the laugh test.

If Seattleites don’t want to see their unique neighborhoods bulldozed under by suburban developers from Kirkland (the Bauhaus Block), Phoenix, Arizona (10th and Union), Scottsdale, Arizona (BMW building), or Arlington, Virginia (Mercedes building) – then they are going to need to force City Council and our one-term Mayor to create a project review process with real teeth.

It’s not my understanding that the board’s request for a feasible alternative preserving all three buildings is something that the developer can opt out of. The board declared a willingness to be generous with departures to make the preservation feasible, but additionally, I believe that the board is absolutely expecting to see the parameters of that feasibility study presented at the next interim review.

So far, the developers are playing the DRB game in hopes they can get what they need, but the “Overlay District” is an incentive program, not a requirement. None of the structures are landmarked and have to be preserved. The extra floor in height is certainly not worth the cost of building around and through all four structures.

I am fed the fuck up with the endless march of developers that are tearing up pike/pine’s character and replacing it with a collection of taller buildings that have all the architectural character of tumbleweeds! The buildings do not fit in with the neighborhood’s small community feeling at all, and most of them have done harm by displacing funky small business and long time tenants.

I have been hanging out at 10th and Pike for 25 years and this is ripping my heart out. Pike/Pine will look like Broadway soon…what a tragedy.

I’m an architect, and I testified at the hearing last night against the project — did you? But of course, I couldn’t know because you don’t even post by your real name.