Another Capitol Hill restaurant has been laid to rest. 14th Ave’s Meza was one of five businesses CHS reported were making plans to make way for construction of a new apartment development on the street. That construction may not come for another year — but Meza is gone after serving its last sangria over the weekend.

We haven’t heard back from ownership yet to confirm the shutdown but a sign hung in the window of the small 14th Ave cafe thanked customers and made a small promise that Meza might return.

CHS reported that the developers behind the 14th Ave mixed-use project have been working with existing businesses to find locations to operate during construction and to find ways to make the businesses part of the new building. Management at Meza had told CHS that the cafe was looking at a January closure. 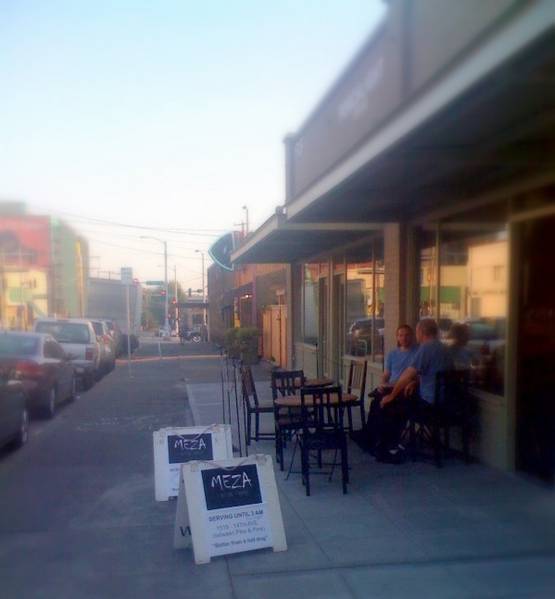 Meza was opened on Capitol Hill in August 2009. First-time restaurant owner Alex Meza featured a menu of tapas and Latin-style sandwiches. It was also known as a place to drink and dance — sometimes late into the night. In 2011, CHS reported on the restaurant’s role in a sprawling shoplifting investigation in which police said detectives purchased liquor at Meza that had been stolen in a major boosting ring. Over time, the part of the investigation into the restaurant’s involvement in the ring fizzled and no charges were brought in the case. UPDATE: We’re told charges were filed but there were no convictions directly related to the case.

It’s not all doom and gloom, however. Ooba Tooba will arrive on Broadway soon as will a new Menchie’s. This summer will also bring Fogon to E Pine and a new rum bar to E Pike.

I’m sad to see theses businesses close. The majority were small and independently owned and operated and as a small business owner myself, I feel for them. We all know that Capitol Hill is changing and the change, on many levels is exciting but I’m alarmed at the number of businesses that are shutting down right now, some after years of serving our collective Capitol Hill community. I hope we don’t look back ten years from now and wonder where the heck everyone went.

To be honest, I’m surprised we aren’t seeing more closures. So many new places have opened up that I wonder how they can ALL stay afloat, given the finite number of customers there are to spread among them. I would think the newer ones have some pretty high overhead costs. On the other hand, it’s hard for smaller places to compete with the newer and fancier ones. It will be interesting to see how things evolve. It’s tough out there now, no doubt.

Seriously. How do all these restaurants stay open with additional competition opening up weekly? I was also wondering this the other day walking around Ballard.

I live around the corner, and every time I passed by, the place was full of people.

It’s a shame that block doesn’t get more foot traffic because it has several good businesses on it.

Lots and lots of people live in Beacon Hill, or Wedgwood, or Magnolia, or dozens of other neighborhoods in Seattle – not to mention the million+ people who live in the nearby suburbs. Some place has got to have all the good restaurants and shops, and we happen to live there, yay.

Yeah, that’s true, a lot of the good ones do seem to be on Capitol Hill. The problem is not enough customers from all those other neighborhoods feel like trekking to CapHill to support them all. I”d bet some of them would do better in other parts of the city– we’re not exactly hurting for plenty of good places to eat around C.H.

Just goes to show you that the restaurant biz, as we all know, is a tough one in which to succeed. We’ll miss Meza. Was a very welcoming environment. The food good too.