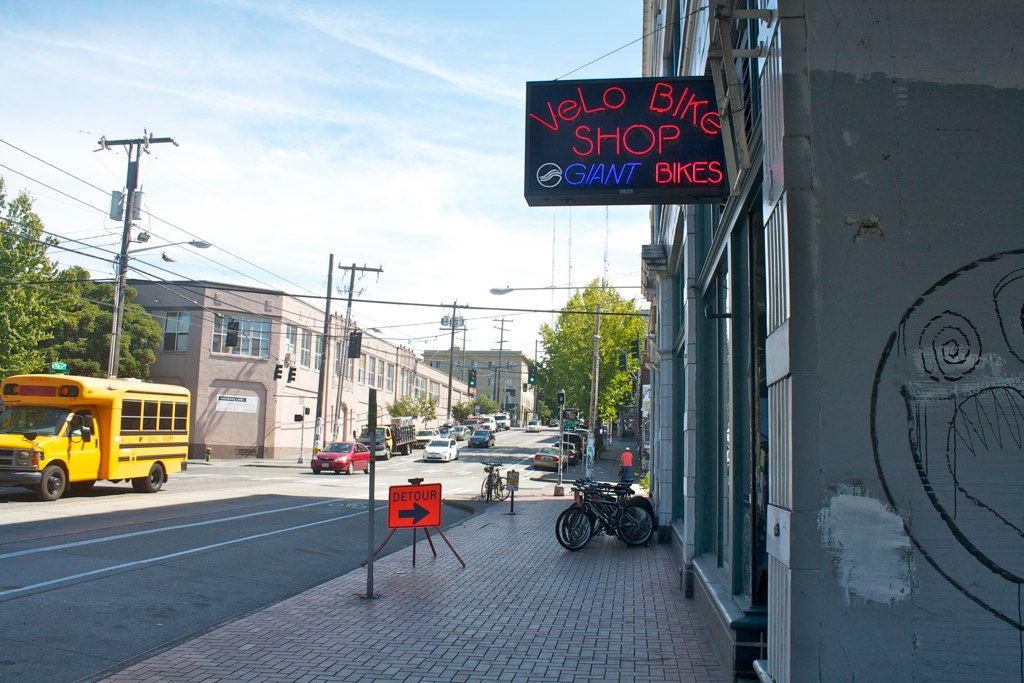 Capitol Hill, noted for its pedestrian and biking oriented culture, still has a few places left to buy shoes but is about to lose a place to buy a bicycle. 11th and Pine’s Velo Bike Shop, a part of Seattle cycling culture since 1968, is moving on to a new store space and bicycling services venture in the street level of an enormous set of new apartment towers in Belltown.

“We had this great opportunity,” a member of the Tamura family that started Velo near the Arboretum in the ’60s tells CHS. “Amazon is going to be across the street. It’s going to be very vibrant.”

Generations of the family have worked at the business Glenn Tamura founded as a bike rental venture along Lake Washington Blvd just before the big bike boom of the 1970s. That’s when he opened the Capitol Hill shop. Others followed. In the 1990s, however, much of the Tamura biking business fell to pieces. The family was able to keep the 11th and Pine shop and it became their sole outlet. This 2000 Seattle Times profile provides a history of the Velo stores. It makes no mention, however, of Glenn’s role in establishing Bicycle Sundays, helping to introduce bicycles to the Seattle Police Department or his Sekai bicycle brand that is now a sought-after collectible. The family says there are plenty of other tales of the Tamuras helping to keep Seattle rolling.

The Tamuras opened the 11th and Pine store in 1985. Today, their upstairs neighbors are the Pulitzer-worthy alternative weekly The Stranger. There is no word, yet, on what is next for the early 1900s Velo building after the 8,000 square-foot bike shop is gone. The property and the adjacent home of Value Village is owned by the same set of investors. Across the street, meanwhile, preparations are underway to begin construction of a new six-story apartment development atop the old Sunset Electric building following its $6.7 million purchase earlier this year by the Arizona-based developers Wolff Co.

Velo’s new store at 6th and Blanchard will be about half the size of the current location but presents the opportunity for the Tamura family to expand into a new bike-related venture. The Via6 apartment towers are described as a “vertical neighborhood” — the idea for the new Velo will be to provide that neighborhood with the bikes it needs and services like bike parking, lockers, showers and, yes, even a bike wash:

Velo Bike Shop has signed a lease at the Via6 apartments and will relocate from Capitol Hill to Belltown. Velo will occupy 3,700 square feet at Sixth and Blanchard in the half-block project that is on the west side of Sixth Avenue between Lenora and Blanchard streets. It will be located across the street from the future Amazon campus.

In addition to the bicycle store, Velo will operate the bicycle club under development in Via6. The club will cater to downtown Seattle bicycle commuters who desire a place to park their bikes during the day and a place to shower. Club members will have access to men’s and women’s locker rooms with showers, restrooms and lockers; a security card access system; towel service; secure parking for up to 250 bikes; and, a bike wash.

The store is scheduled to open Spring of 2013.

As the clock ticks toward next spring, a Velo representative said you can probably expect the Capitol Hill location to remain open up until the big move.

…How does our village retain the essential services and busineses we need here to be a complete neighborhood? We need a bike store/service station…..Velo just disassembled my son’s bike and boxed it as baggage for his flight to Montreal – what a service, in walking distance!

I agree with both points.

It’s a great opportunity for Velo since they tend to sell higher end bikes that will probably go over better in the SLU area, which is both more affluent and more male (who unfortunately are still the majority of bicyclists).

It’s also a loss for the area, mainly for bicycle service and maintenance-type purchases, like new tubes, cleaning materials, etc. I think this is a great opportunity for a more service-focused business, probably in a smaller location, to fill the void that Velo is leaving. Bike Works, please open up a shop in Capitol Hill!

I find it very difficult to believe that Capitol Hill will no longer have a full-service bike shop. I used to volunteer as a mechanic-trainer at Bikeworks (I worked in bike shops during HS and college) and already contacted Bikeworks earlier today. They indicate they’re not ready to expand. It seems like that sort of community-focused shop would do well, especially without any competition on the Hill. I’d be happy to contribute some time to helping a bike shop find a space up here, though I can’t lead the effort (contact me directly if anyone is available to do so).
Maybe an established local indie shop like Montlake or Gregg’s might be willing to join us on the Hill?

There is a community based space near Capitol hill. The bikery.

My main area of concern is that Velo has regularly serviced my bike for a couple years now, where is the closest place I can go for bike maintenance? Maybe it’s just time for me to get with it, and learn how to fix my own bike. I sure appreciated the pleasant customer service and speedy turnaround at Velo – not to mention the convenience.

I’m in the same boat… or something. Not a mechanic and more prone to break than fix, I’ll need a new tune-up solution, too. Would prefer a place in the neighborhood.

i realize it’s just your usual sass, but it is not funny to suggest bolt cutters. bike theft is a real problem, and it totally sucks for the victim.

I’ve been shopping and enjoyed the Sunday and Wednesday evening rides Velo hosted for quite some years now and have looked forward to the great Bike rides and support the Tamura family has shown me and my friends. Though 2013 will mark an end to 28 years of service they have provided on Capitol hill, This monumental move will make the South Lake Union area strive for many years to come.

Don’t fear. There is a great little independent shop at 12th and Howell called, “12th Ave Bicycles and Collectables [sic].

It doesn’t appear that anyone has mentioned Branford Bikes yet! They’re a fantastic (and tiny) bike shop in N. Capitol Hill. I’ve been in there to shop, chat and order parts. They custom-built a bike for me out out of 1970’s vintage Campagnolo parts. It took a few months and they were happy to display the bike in their window throughout the process, help me find parts, help me learn how to do repairs on my own, and teach me more about bikes than I ever thought I’d need to know. They even loaned me an awesome DVD about Eddy Merckx because they thought it was “a great story.” Truly an awesome, locally run, small operation with big hearts. Velo will be missed but we definitely still have options close to home on the Hill.

Oh, great reminder. I forgot about them. Will have to stop by.

I love the people at Velo, and they were great for service, and their location was the best, but their bikes & accessories always seemed like they were out of the early 90’s. They improved a tiny bit recently, but not very much. A great example is a Slog post when a writer asked where they could find a bike helmet they weren’t embarrassed to wear, when their offices were right on top of Velo.

Seattle really needs a city bike shop like they have in Portland and San Francisco (an example is Clever Cycles in Portland, although a Seattle shop would carry more bikes good for hills).

In the past 5-10 years there has been a huge improvement in American city bikes – unisex utility bikes designed for city streets, cargo, hills, frequent stopping, safety, and style – but it’s almost impossible to find them in Seattle. I wanted to support a local shop, but I bought my last 2 bikes online and in Portland.

There’s that shithole on 12th too.

I’m sure the Bikery is great, but “near” Capitol Hill is very different from “in” Capitol Hill, especially for people who have a broken bike and no car to haul it somewhere to be fixed. Something closer to the center of CH would be a huge improvement.

I have leaned heavily on Velo for the past 4 years living on Capitol Hill. NOOOOOOOOOOO

5 bikes bought so far and counting at VELO

Oh so sad. A business moves off the hill because of opportunity and profit and didn’t stay because well the neighbors were entitled to have such business but most will never use said business but to make their neighborhood entitled I mean function they need businesses that they cannot afford to support.

This has been another episode of “Who’s Offended Today?” brought to you by Angry Mythical Bicycle Theft Citizen’s Brigade.

Goodbye Velo! I have two friends who bought bicycles there that turned out to be stolen. Another friend told me they kept “used” bikes that were stolen in the basement for a year and then sell them. Buy low, sell high, hope no one notices.

None of my serious cycling friends will step foot Velo. They’d rather go to Recycled Cycles.

You guys, the centre of population is moving downtown. The height limits are more relaxed, which allows for more density. It is downtown that needs services like this, since it is becoming more dense and populous than Capitol Hill.

Sad to see this shop go, I had no idea that they were behind Sekai, that is awesome. At least it will be a new opportunity to them.

20/20 has a super friendly and accessible staff, and is my go-to shop on the hill. They’ve got a quite a bit of commuter friendly products as well as used parts bins. The shop seems to lean towards regular-people cycling; not to disparage the racier shops, but it’s nice to have a bike shop where you get a rad kickstand and have your choice of rack.

Is this what you were trying to say?:
It’s a shame that people are upset due to the relocation of a business; a business’s main concern is profitability and if it encounters an opportunity to better its profits, then it is entitled to capitalize on that even if it means relocating. In contrast, the community is not entitled to the venue for a particular type of service just because it would be convenient for the denizens of said community or because it makes the community “whole.” Clearly the community could not support this particular bike shop and this bike shop has decided to move on. Perhaps we should take note of this and support our local businesses, instead of griping when a rarely used shop, we had grown accustomed to, is no longer there.