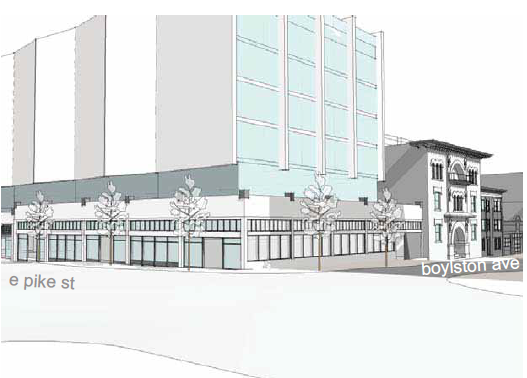 Plans for the Mercedes dealership property on E Pike

The East Design Board will get its first look at two Capitol HIll projects Wednesday night. One of the new buildings represents yet another twist on the struggle to measure just how much preservation should be required to justify developer incentives in Pike/Pine. Meanwhile, the second building is the type of scrappy project you kind of have to love — destined to live in the shadows of its heralded and trailblazing, super-green, super-solar neighbor across E Madison, a project we’ll proudly call the Taco Time building is ready to take shape and take its turn in the Seattle design review process.

600 E Pike
CHS has reported on the road leading to the start of this development project for months as word first spread early last year that the family-owned Mercedes dealership at the site would be sold and moved off the Hill. By September, we learned that big time developer Avalon Bay was preparing to buy the land with plans for a mixed-use development incorporating elements of the auto row-era structures in return for the extra floor of height the Pike/Pine Conservation District makes available to preservation-minded developers. The sale price, by the way, is not yet available from King County records. 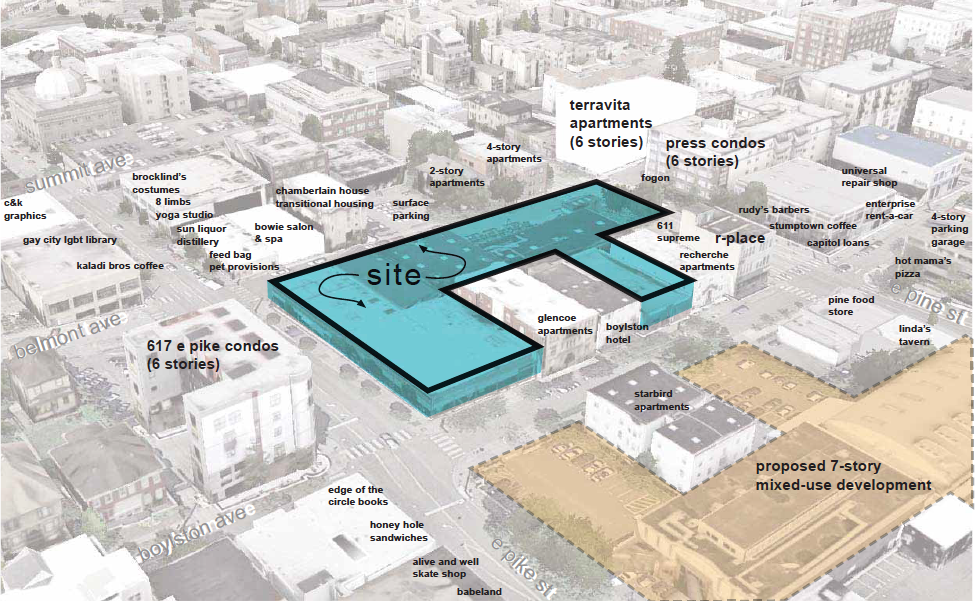 The plan Avalon and architect Ankrom Moisan will come to the table with Wednesday night will present yet another variant of preservation being sought by developers trying to work within the auspices of the conservation district. The project developers will begin making their case for the board to support a preservation plan that will see extensive restoration to two of the main structures’ street frontage and the internal structure of the Boylston garage building but not full preservation of the primary showroom structure’s internal historical attributes. Yeah, we’re not even sure what we mean by that — but, basically, this project will be another test to just how much historically preserved and restored facade is enough to justify the incentive square footage. Without incentives, the project would pencil out to 178,000 square feet of residential space and 17,000 of retail. Adding that bonus floor will give the developers another 4,000 feet of retail space to profit from. 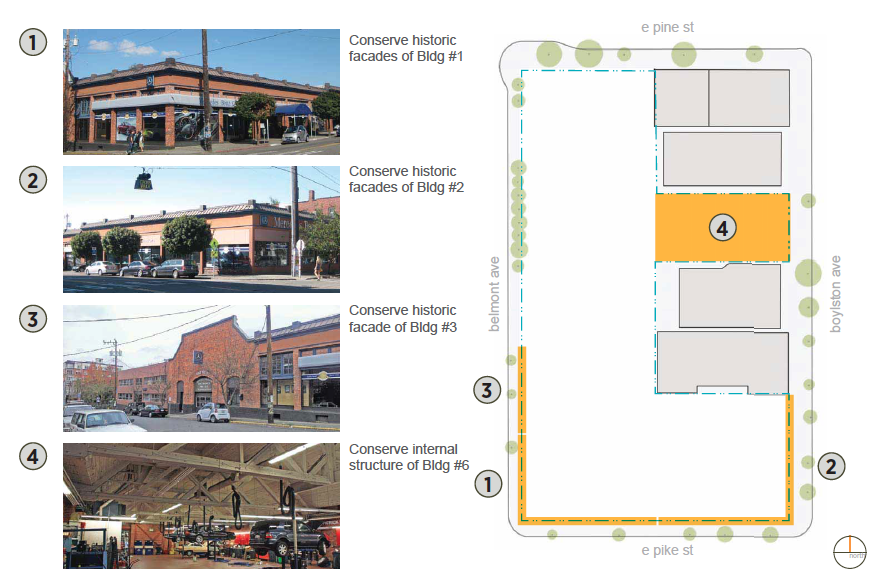 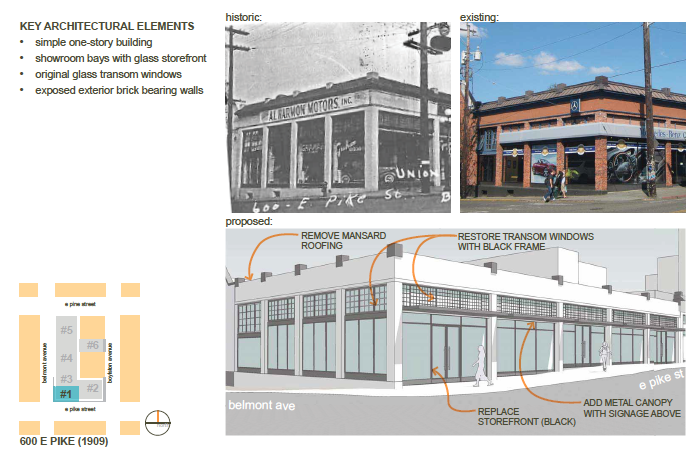 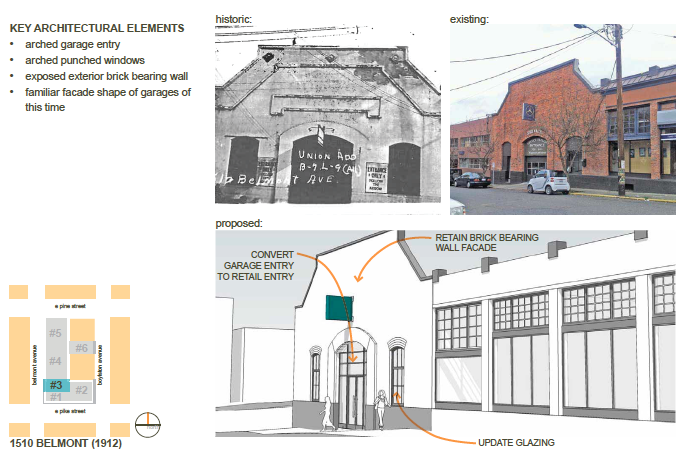 Meanwhile, some of the current Mercedes dealership and garage’s funky features will be killed off in the process — say goodbye to the mansard roof — while the arch that currently serves as a garage entrance on Belmont is envisioned as a future retail entry.

With the incentives in place, the project is planned to soar 75 feet, house 250 to 300 residential units, include “distinctive retail spaces that are appropriate for the neighborhood,” and make space for around 300 underground parking stalls. In addition to permission to utilize the preservation incentive while not preserving the main showroom structure’s internal attributes, Avalon will also be asking the board to bless smaller than specified setbacks for the tower components and allow splitting of the automobile entry from truck parking between the Belmont and Boylston sides of the project. 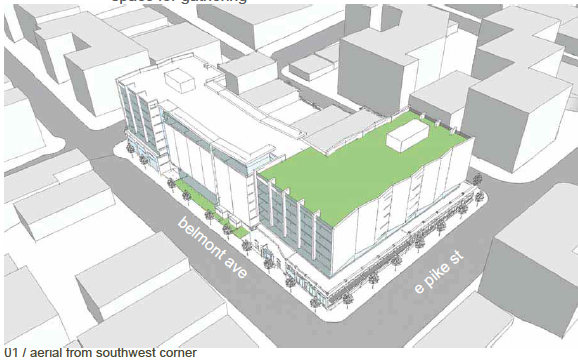 As for the preservation tradeoffs, by now, the East Board has some precedent to fall back on having dealt with similar tradeoffs in the nearby 714 E Pike project redeveloping the old BMW campus, and this 10th and Union development we wrote about this week slated to complete its design review run later this month. 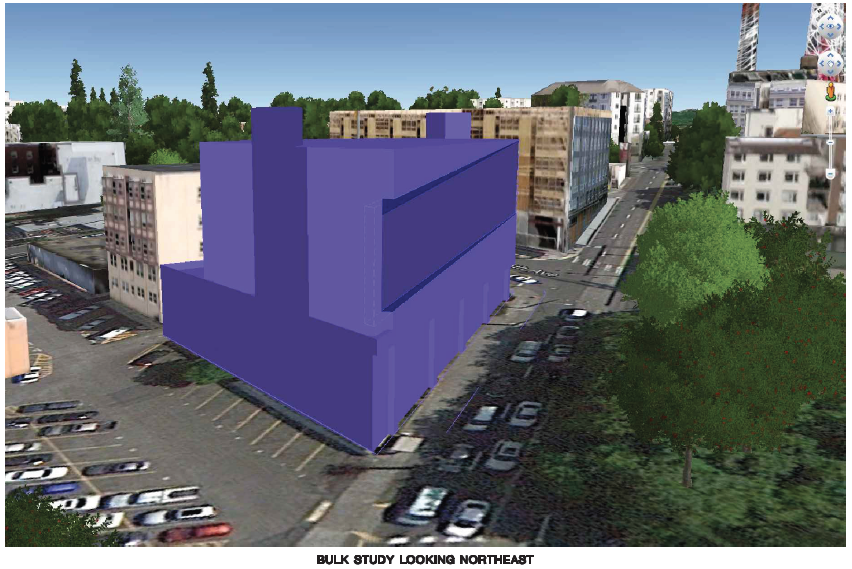 It’s tough to get much attention when you’re a simple, mixed-use apartment building planned for a now-empty lot across the street from the world’s greenest office building. But after tearing down their fast food restaurant that stood on the site and seeking a buyer to develop the property, the family behind the Taco Time chain of restaurants held onto the land and are now moving forward with a plan to create a six-story, 70 unit building on the site.

Good news, Mexi-fry fans — the plans include some 3,700 square feet of commercial space. Sounds like plenty of room for a return of TT to E Madison, no?

Meanwhile, those who consider global warning a fad and enjoy tossing stones at solar-powered, 50,000-square-foot glass houses might be disappointed to learn the Taco Time project only has plans for 95 parking stalls. Still, we’ll be on the lookout for Denis Hayes sneaking an SUV onto the new property across the street from the Bullitt Center once construction is completed.

The 1420 E Madison project is designed by Capitol Hill-based architect Roger H. Newell and could incorporate an even split of studio and 1-bedroom apartments or a majority 1-bedroom set-up depending on the scheme the design process ultimately settles on.

I’m surprised to read that both of these developments will have lots of parking…1:1 ratio (parking:units) in the case of the Mercedes property, and more than 1:1 for the Taco Time property. Perhaps the developers are planning on offering some spaces to non-residents, but this much parking is not in the current spirit of encouraging people to use transit. I wonder if residents of these buildings will be given the option of no parking spot in return for reduced rent.

I have spoken out previously about the problem of new buildings having no parking (such as all the apodments), but this seems like an extreme in the other direction. Wouldn’t a parking:unit ratio of about 1:2 make most sense for the majority of new buildings?

Believe the last thing that will happen is reduced rent.

I like both of these proposals a lot. Preserving the original structure at 600 E Pike while using the air space, this proposal seems reasonable, and I believe that the developers were paying very close attention to previous projects as they presented to the review Board. I think this proposal will be accepted with few if any changes.

The Taco Time project, not so much, but it seems appropriate for the area. I bet there will be some massing changes before approval. Hard to say what from the sketch provided. Looks too bland for the review Board.

Just want to say you guys do an amazing job covering Cap Hill developments. Thank you for your thorough notes, DRB coverage and for including plans.

Thanks, Bob. If you’re trying to tell the story of this area — like we are :) — the redevelopment of the Hill is a big, ongoing theme. I hear criticism here and there that we are cheerleaders while others ask me why we are anti-development. We’re tracking what is happening and trying to explain what we see and hear. Anyhow, thanks for the nice comment.

OH, I do so hope that Taco Time will return. I miss their burritos and mexi-fries.

No single development should be able to dominate as much of a city block as these do. Let me be clear, I’m not opposed to height and I’m not opposed to density, but I am opposed to the monolithic continuous facades. Sure, modulations and setbacks can break up massing, but it’s still a 1/2 to 3/4 block building and that’s so out of scale for this neighborhood. I’d much prefer to see these sites broken up into 3-4 separate developments. Even if they were built to the same height, breaking them up could provide some sincere design distinctions and breathing room. The neighborhood I live in is not the neighborhood I moved into 10 years ago. I’m not afraid of change. That’s the nature of cities and I think increased density is a benefit, but the qualities and characteristics that I fell in love with nearly 20 years ago and that eventually brought me here are disappearing week by week. It’s heartbreaking.

“Meanwhile, those who consider global warning a fad and enjoy tossing stones at solar-powered, 50,000-square-foot glass houses might be disappointed to learn the Taco Time project only has plans for 95 parking stalls. Still, we’ll be on the lookout for Denis Hayes sneaking an SUV onto the new property across the street from the Bullitt Center once construction is completed.”

folks involved in design, architecture and sitework have known for quite some time that the Taco Time space design was changed at the request of the Bullitt Center to add parking but the Bullitt folk have done their best to silence any such comments.

I think having more than a 1:1 parking ratio is a great idea. Only an idiot would think cars aren’t necessary. The fewer cars allowed to park on the streets, the more room for a bus to move unencumbered and the less pollution the bus will make. Besides, isn’t part of being “green” working in cooperation with others to share resources? More parking sounds win-win to me

These buildings all charge for parking, typically $150 per space per month. So yes, essentially your rent is reduced if you don’t park a car, but effectively every unit in the building is subsidizing the cost of building all that parking.

Speaking from experience living in a huge full block generic 6 story building on the hill, those parking garages are frequently significantly underutilized, aside from the floors made available for public parking.

It’s honestly pretty offensive that this much parking is being built –do the Amazon employees who will move here really need to drive to work?

[…] Roger H. Newell needs to get his design through the preliminary round of the process. The project made its first run in January as the review board sat back, folded their arms and decided that the massing concept wasn’t […]