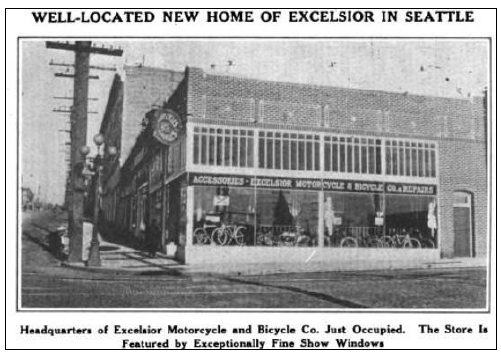 On February 20th, Seattle will consider Capitol Hill’s Melrose Building and the Pinevue Apartments — both slated to be partially demolished and partially preserved as part of a seven-story mixed-use development — as officially protected landmarks. Some see the Landmarks Preservation Board session as the last chance to save the Bauhaus building from development. They’ll have their work cut out for them.

The nominations of the two buildings along E Pine at Melrose — one, a 1916 apartment building with street level retail, the other a 1915 commercial building that has been home to everything from a motorcycle shop to Bauhaus — are being brought to the board by developer Madison Development Group “as part of the Seattle land-use permit and SEPA process to ascertain the historical nature of the subject building,” the nomination packets note. 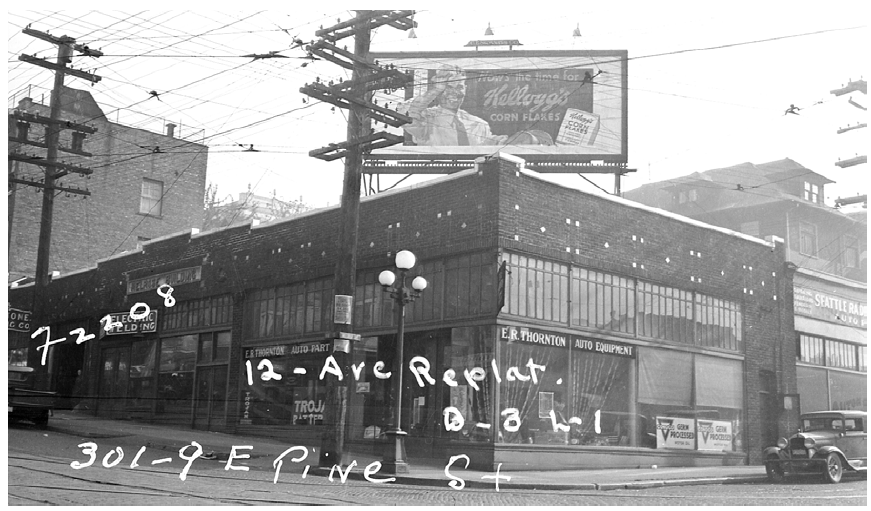 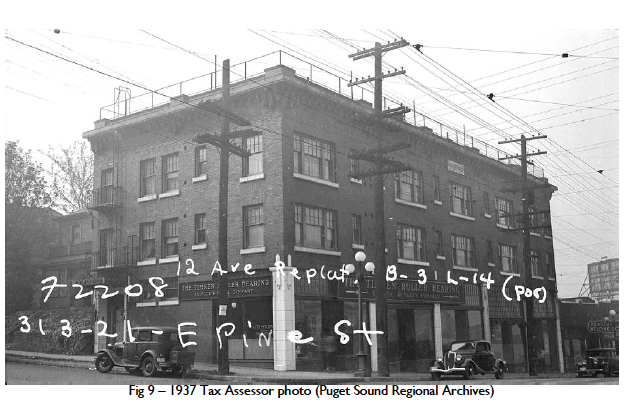 We have a call out to Madison Development but have not year heard back.

For those hoping there is a chance that landmark status for the buildings could stop the project, the process is more about shaping what property owners can do with their structures and providing incentives for preserving important historical elements. Here’s how the Historic Seattle group explains it:

Administered by the Department of Neighborhood’s Historic Preservation Program, over 400 places have been designated Landmarks under the Ordinance. The Ordinance allows any member of the public to nominate a potential Landmark, with or without the owner’s consent, to the Landmarks Preservation Board. With staff recommendations, the Board has the power to designate as Landmarks those properties and districts which meet at least one of the standards for designation. Once designated a Landmark, the Board prepares a Controls and Incentives Agreement for the property outlining what must be preserved and what assistance is available to do so.

There are more than 400 landmarks designated in Seattle including these in the area of Melrose and Pine:

The February 20th session will include deliberation by the board to decide if the nominations should move forward. There will be time for public comment at the meeting.

OF THE LANDMARKS PRESERVATION BOARD

Landmark Nomination for the Following Properties:

The Landmarks Preservation Board will consider these nominations at its meeting on Wednesday, February 20, 2013 at 3:30 p.m. in the Seattle Municipal Tower, 700 5th Avenue, 40th Floor, Room 4060.

If the buildings are designated for protection, it’s not clear what impact it would have on the development planned for the block. The Hewitt-designed project is already planned to incorporate the facades of the old E Pine buildings.

The nomination documents present some compelling evidence for historical significance. Perhaps most importantly, both nominations document how little alteration both inside and out the buildings have undergone in their nearly 100-year lifespans. 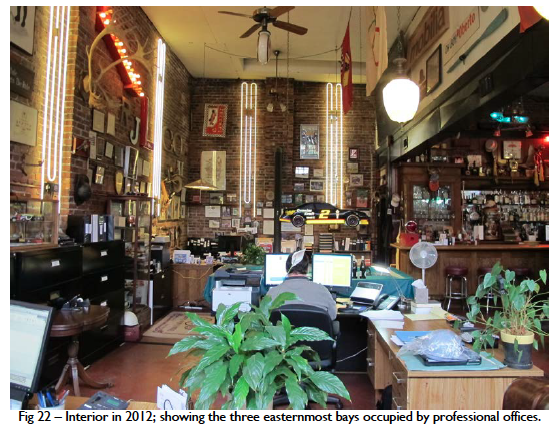 So that’s what’s inside there. Office space inside the Melrose. 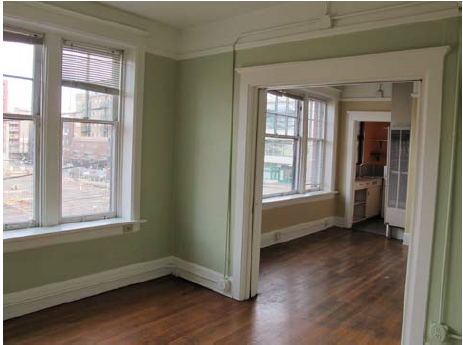 But the documentation submitted by the developers also shows plenty of weaknesses for the case. Neither building had an obviously historically significant owner — though the case could be made for the Melrose Building George Gund, it seems, reading through his legacy in Seattle documented in the nomination. We also liked the note included about Pinevue owner Evelyn G. Fillion:

…a Seattle schoolteacher who had apparently retired in 1936, and lived in an apartment in Belltown. On a $100-a-month pension, she invested inreal estate, buying rooming and apartment houses, then operating or improving and selling them. When she died in1952 at age 80, she left an estate valued at $275,000 (about $2.3 million today).

Significant tenants might also be seen as lacking though it’s fun to read through the roster. 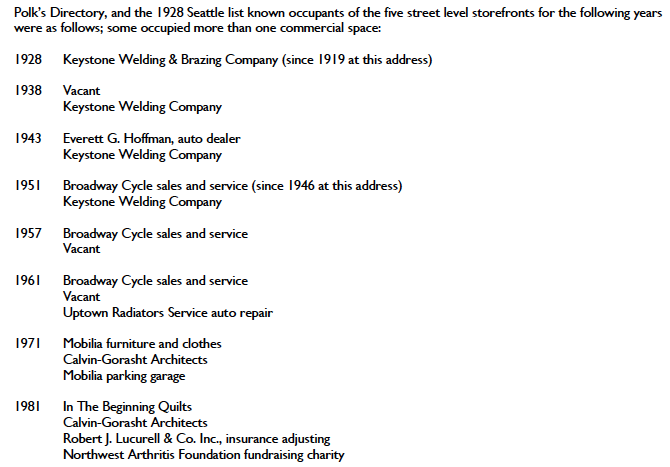 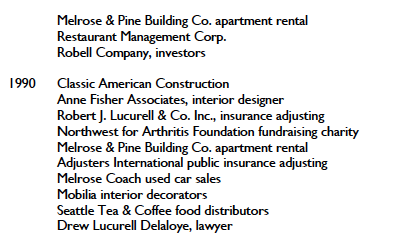 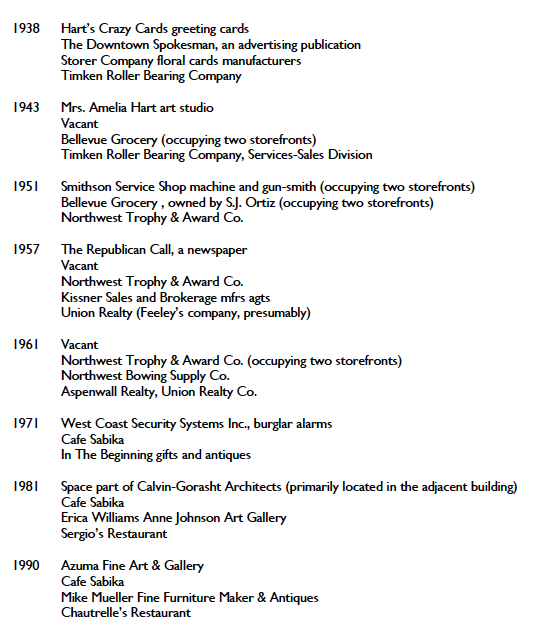 Meanwhile, the Melrose architect John Alfred Creutzer was “prolific and moderately well-known” but Harry H. James, architect of the Pinevue, designed many area apartments and was a founder of the Washington State Society of Architects. Maybe that will sway the board.

As we’ve noted before, one byproduct of the nomination process — besides disappointment at what is not a landmark — is a document capturing some of the history of the neighborhood. Here’s a look at what was happening here as the buildings were constructed:

Just a few years later, the 1912 Baist map shows extensive streetcar lines serving the neighborhood, including alongPine directly in front of the building, along Pike and Melrose at the subject block, and along Summit and Bellevue north of Pine. During this decade, increasing numbers of apartment buildings , mixed use buildings, and automotive-related businesses began to line the main streets of Pike and Pine, leading up to Broadway, the main north-south spine of thegrowing neighborhood.

You’ll also find some echoes of familiarity in the tenants of the Pinevue back when it was fresh and young — though those rents are anything but familiar:

When it opened in 1917, fitted with two-and-three room apartments averaging 455 square feet, efficiency kitchenettes,and built-in Murphy beds, the Pinevue likely catered to working singles, young couples, or retired single persons. In the 1920s, apartment living was becoming increasingly acceptable to Seattleites, and socially acceptable for single young women, who were finding work outside the home. Several 1920s classified ads for the Pinevue listed it as “walking distance to 2nd Avenue” and “a few blocks from Frederick & Nelson’s,” a long-time Seattle department store. In 1921 adressmaker living in the building announced her relocation to the Pinevue the classifieds; in 1924, a person advertised private English classes for foreigners. 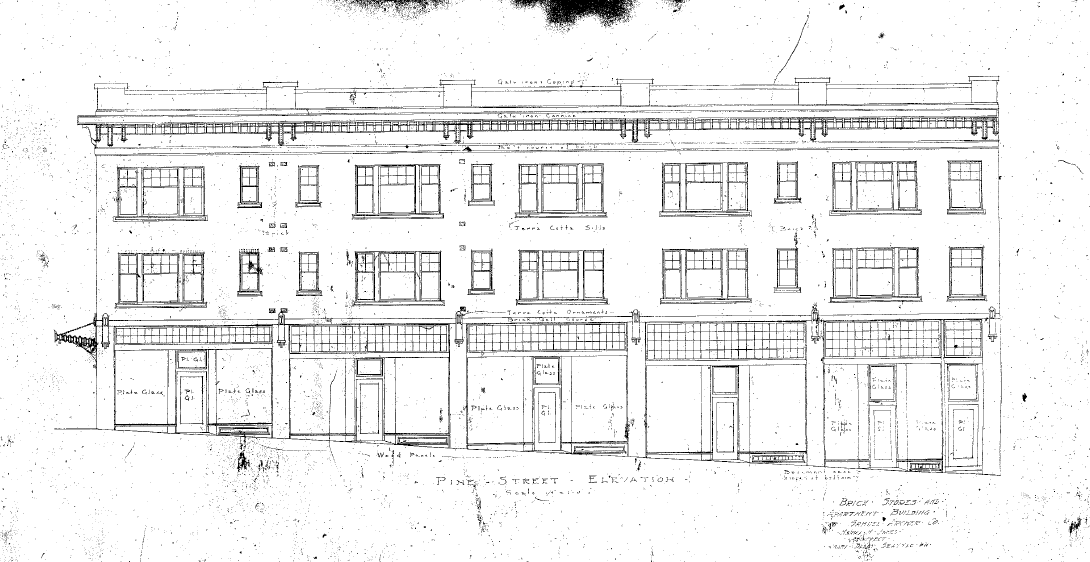 Let’s just hold our collective breath that the Landmark Board will go beyond the consideration stage and actually grant landmark status to these buildings. I just walked downtown today and passed by this block — all the while, conscious of the huge construction project going on across the street and up a bit. Fingers crossed here.

I hope they are preserved. Without buildings such as those Capital Hill will not have the same vibe. Yes Good News!

Hope something works out

So does that mean Bauhaus won’t relocate to Ballard?

Mobilia was in what is now the Bauhaus space – a very cool contemporary design store back in the 70’s. Cafe Sabika was a breath of fresh air on the restaurant scene in 1971, tasty, romantic, and the owners were strikingly good looking. Made one want to start a restaurant. And my friend Anne Fisher had her design studio in the Melrose for a number of years.

…..that it’s the DEVELOPER who is requesting landmark designation, which no doubt is a way to increase the value of whatever is built there. It does not mean the buildings will be preserved any more than what has been previously announced.

When developers submit for Landmark status, the purpose is usually two-fold: 1. To pre-empt a surprise from a community group doing so at a later date. 2. To make sure they know what their options and restrictions will be with regard to how the design will work.

This is why the submittal package is very often put together by the architect. The positive ways this can work are demonstrated in the Seattle First building on Denny that is now a Walgreens–that originally could have been eliminated as part of the Taylor 28 apartment development.

I hope you’ll attend the public meeting and share these memories. A bulleted list of tenants may look unimpressive, but there is an undeniable sense of *place* in these buildings and your stories illustrate that.

[…] likely the Pinevue will face even stronger opposition at this more advanced point in the process. CHS examined the case for both buildings prior to the February […]