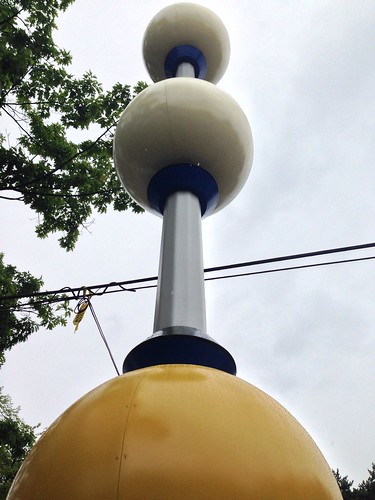 Close up of “art pole” at the Broadway/Yesler
First Hill Streetcar stop (they are all metal),
originally uploaded by Gordon Werner.

Along with the new lines and markings on Broadway for the streetcar and its stations, you might have noticed these new poles bedecked with “sculptural beads” popping up along the line. Here’s more on Seattle artist Claudia Fitch’s designs:

Over the past year, crews have been busy at work laying track and infrastructure for the First Hill Streetcar, which will run from Pioneer Square through the Chinatown/International District and First Hill up to Capitol Hill. Large sculptural “beads” have recently been added on some of the poles that support the wires powering the streetcars, marking key stations or nodes along the line.

The beads are the work of Seattle artist Claudia Fitch, who worked with Seattle Department of Transportation (SDOT) staff and First Hill Streetcar project designers, including Mithun, to develop site-integrated artwork along the entire line of the streetcar, focusing primarily but not exclusively on the poles. Some of Fitch’s beads are now in place on Yesler Way and on South Jackson Street. The remaining beaded poles will be installed in Pioneer Square, the Chinatown/International District and on Broadway over the next few months.

Fitch views the continuous power wire as a thread that links many neighborhoods on the streetcar line. From there, she drew on metaphors related to sewing, needlework and beadwork. Streetcar poles will be capped with the “eye of the needle” or, to mark stations, with “beaded poles” – large-scale, abstract bead shapes that are unique to each station. To reinforce this theme, bollards that take the form of a “stitch” will be installed later this year to shield the cycle track along Broadway.

Fitch’s artwork includes public art commissions in the Northwest, including Qwest Field and in the South Lake Union neighborhood. She has also exhibited her work in museums and galleries nationally and internationally.

The project was commissioned with funds transferred to SDOT from Sound Transit.

B
Reply to  Anonymous

I am very excited about seeing the whole artwork at its completion, but this is still a very good joke.

Yeah, nice try, everyone can see they are NSA monitoring stations.

Sound Transit’s choices for public art (Ellen Forney’s work excluded) really make me wish we could repeal that 1% for Art rule… although this isn’t as bad as the metal martini glass they had at Pine behind the Paramount for awhile.

Why don’t we redirect it to fund arts education in the schools? This program really has become a trough in recent years.

Actually, if this is art, then yeah, everyone CAN be an artist.

I wish they would have put the red lights on horizontal poles rather than hanging from wires. Looks much better.

A simpler way to make it look better rather than adding these…things.

These things are landmarks first, and art second. They are also all located on city sidewalks, so their format is somewhat limited. I suppose a standard bus stop sign would work, but it’s kinda nice to be able to see where a stop is from a couple blocks away. Basically, I see them as creative, 3D Google map pins….

And as a long time resident that is in touch w/ reality, I seem them as more targets for graffiti and acid etching in a matter of days.

Saw one of these in person for the first time today. I understand and appreciate their function as station markers etc, and also deeply appreciate the design constraints of making something for installation on sidewalks. I am not at all familiar with this artist’s other work, though I am quite sure it is well regarded. It is also *always* easier to react to art than to create it. All of that said, my first thought was that there must be a gigantic martini glass somewhere nearby… and my second thought was that it would probably take someone ten seconds with a lipstick to turn these into bloodshot eyeballs on a stick. As the saying goes… “what were they thinking?”

“added on some of the poles that support the wires powering the streetcars, marking key stations or nodes along the line.”

I wonder what they mean by “nodes”. I was thinking these will be good for people unfamiliar with the neighborhood to see from a distance down the street where a station is, unless they get there and it’s not a station but a “node”. :D

The center picture depicts the “art” that is directly outside my apartment. Big Brother is now continuously monitoring all activity in my apartment while staring into my kitchen and upstairs hallway windows.

I’m going to reserve my opinions on the art (not that they matter much anyway) until the whole project is complete. My first two thoughts when I saw this one were eyeballs and the NSA watching our every move, and, gosh, I hope they included a big budget for tagging clean-up. Well, the tagging clean-up must commence soon: I just walked by and the lower orb has been tagged already. Sigh.

Damn taggers have no respect, even for works of art.

These objects just add to the street clutter and are ugly. Explain to me how the seamstress and sewing motif relate to these neighborhoods in any way.