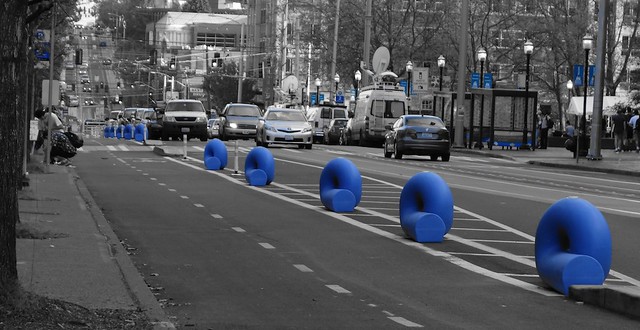 With all of the new-era Seattle Department of Transportation initiatives playing out around Capitol Hill, the neighborhood has some of the most colorful — and, sometimes, confusing — street infrastructure around. Some elements are loved. Some, not. Perhaps the most hated infrastructure of them all was hastily removed from Broadway over the weekend.

“Smurf turds gone from B’way bike lane,” was the subject line of one set of pictures emailed to CHS about the removal.

Thanks for the Smurf turd pics, Charles

It’s true. Without warning, the plastic blue bollards of the Broadway bikeway were removed and trucked off by SDOT Saturday after failing in their one critical mission over the past 18 months. You had one job, Smurf turds.

Designed to protect bikers using Broadway’s separated bike lanes and evoke a “needle and thread” theme with other First Hill Streetcar infrastructure, the 21 bollards along the 1.2 mile bikeway instead proved irresistible to taggers and wholly mismatched in their battle to maintain a two-foot buffer separating bikes from parked cars along the route.The bollards were manufactured of molded plastic by Landscape Forms in Kalamazoo, Michigan and were filled with hundreds of pounds of sand. After their first eight months of being pushed around and falling down on the job, the bollards were fitted with braces. That didn’t really work either.

The removal appears to mark the end of the road for the bollards though SDOT hasn’t yet said why they were removed or if there are plans to replace them. Simpler white plastic posts now line the route. Meanwhile, the plan to extend the bikeway north on Broadway along with the streetcar tracks remains in motion. But it appears the bollards won’t be around to see the start of service for the First Hill Streetcar they were intended to accompany.

UPDATE 1/11/2016 — 11:11 AM: They live! Sort of. In our assessment of the bikeway Saturday, we didn’t notice that a few stitches remain in place south of Pine. SDOT says they’re staying — but the rest? Gone for good:

The removal is permanent for the area between E Pine and E Howell streets. In that area the blue “stitches” have been repeatedly struck and damaged.

White posts, used on bike lanes around the city, will replace them. The stitches south of there will remain.

So, uh, will they be replaced with something else? Whatever they’re replaced with should be high enough for cars to see it out their mirrors but short or clear enough for both the visibility of bikers and to not shit up the neighborhood.

May I suggest an art wall of used bike rims that spin with the wind?

Another waste of money. Too bad the folks that concocted and approved them couldn’t have seen into the future. I get the desire to be artsy and whimsical but often what is needed is the practical choice. They look pitiful on the back of the truck all dirty, faded and tagged.

Vancouver has nice concrete planter boxes with greenery. This would be a much better implementation.

Yes, please. Planters are practical, beautiful and add a feeling of green space.

Planters are the correct answer. A concrete curb is the next best option. So rest assured SDOT will not implement either one of those.

I suspect if they were spending their own money these purchases would be made much more carefully.

Thank goodness! It’s about effin’ time. I applaud the concept — and kind of wish it would have worked — but this was a poor concept for this neighborhood.

I agree. Early-on, supporters of this bike lane kept claiming that with time it would get more use. That has not happened. I rarely see any cyclists there. It’s time to remove it and use it as a lane for vehicles instead….at least then that side of the roadway will not be backed up with vehicles waiting for the streetcar to load/unload.

Glad the smurf thingies are gone. I wonder how much they cost? Another failed effort by that most dysfunctional of City departments…SDOT.

Same with the one downtown. I do see bikes on it, but very rarely. And when I do it’s only during the rush hour periods. Weekends and all other times of day it’s wasted pavement. Most cyclists I know take the path down by the waterfront to avoid the road crossings and delays caused by traffic.

I think the real insult is when there is a bike path and the cyclists still choose to use the road and screw up traffic (all the while complaining about said traffic they helped to make worse).

Ryan on Summit
Reply to  AbleDanger12

Imagine how much car traffic there would be if there were only one or two dedicated car travel streets.

Yea, the few times I’ve seen a bike on Broadway, they have been in the regular lanes, not the bike lanes.

OTOH, I see tons of bikes on 12th… which is were a lot more of the cars now go since Broadway is so clusterf**ked.

They should have just poured more concrete curb between the bike lanes and the parking lane.

True. If they’d have just made the bike lane too narrow to get a car into, but plenty wide enough for bikes, there would be no problem with people driving into it or parking there.

The Smurf turds were just the frosting on the cake for this horrendous street design. Broadway is a complete mess. The bike lane is massively wide and massively underused. I’ve literally never seen anyone ride it. This is Seattle, not Los Angeles; we have weather that is not conducive towards biking, except for the die hard bikers. The priority should have been given to the streetcars/buses in order to give them their own traffic lane, but of course Seattle’s city planners lack enough vision to realize that Broadway would become the traffic disaster that it had become thanks to a bike lane no one uses. I’m so glad millions of tax dollars have been thrown away into a streetcar that doesn’t have its own lane (and a streetcar no one wanted since its inferior to the buses we already have today) and spent our taxes on a bike lane no one wants or uses. This type of city planning shows how out of touch the city planners are to reality and community needs.

” we have weather that is not conducive towards biking”
Weather’s actually not that bad: I commute daily by bike and get soaked maybe twice a year. I agree that it’s grey and drizzly, but it’s not a bad commuting environment.

[The late Emmett Watson would thank you for your contribution to “Lesser Seattle”: https://en.wikipedia.org/wiki/Lesser_Seattle ]

I love the protected bike lanes and ride them regularly with my children. You probably don’t see us because the lanes work well and we get where we are going. Indeed that is the funny thing about infrastructure that works – it often looks “empty” because the people aren’t stuck. Here’s one (of many) explanation of why more motor lanes will not help you or anyone else: http://www.wired.com/2014/06/wuwt-traffic-induced-demand/

If you want to try riding around the city with my children and elderly relatives, let me know. It is easy to complain about cyclists until you experience being responsible for a group of all ages and abilities riders. The beauty and utility of infrastructure that is designed for people rather than 2 ton vehicles becomes apparent quickly.

When the bike lane was proposed (A Capitol Hill Community Council idea, as I recall) I noted the presence of multiple, adjacent, parallel streets that I had used for ever to cycle on. [That radical concept has now been embraced as “Greenways].

I now dutifully use the Broadway bikeway several times a week and can report that it does indeed work and that I have (maybe twice) seen another bike on it.

I can also report that traffic on Broadway itself is both slow and infrequent, and it’s actually quite a pleasant street to ride on. And the newly laid concrete between the rails is a lovely smooth cycling surface [as is the Lake Union route].

I’ve seen streetcars on the route but have yet to share the route with them. (I’m sorry to note that they’ve taken the plastic covering off the seats, so that good “new streetcar” smell will have gone away before we get to ride them).

Andrew, it sounds like you are encouraging cyclists to use the vehicle/streetcar lanes on Broadway instead of the dedicated bikeway. Am I wrong?

This is wonderful news. Thank you for sharing that photo of these pieces of smurf shit loaded on a truck to be disposed of.