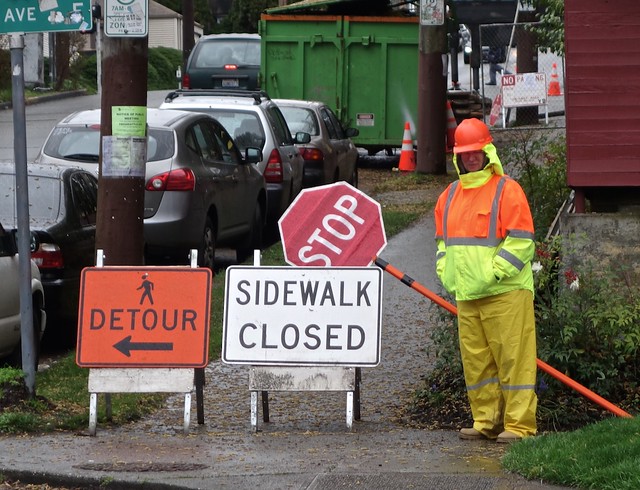 If a new set of rules work as intended, it should be a lot safer to walk — and drive and bike — around Capitol Hill’s continuing wave of big construction projects. The Seattle Department of Transportation has new rules to govern when and if a developer can close a sidewalk during construction.

The biggest change, according to Brian de Place, street use director for SDOT, is a policy statement that changes the tone for sidewalk closures. As a general rule, it’s expected that Seattle sidewalks shall remain open during construction.

As a result, future projects are expected to find a way to keep the sidewalk passable rather than sending pedestrians across streets and around blocks. “That’s out default. That’s our starting point,” de Place tells CHS. “You are minimizing the instances when someone has to cross the street.” The new rules mean a new effort around enforcement. If you see conditions around a construction site which you think are unsafe, report them to SDOTConstructionHub@seattle.gov. Specific locations and pictures can help make sure things get cleared up as quickly as possible.

The old regulations, which date to 2011, did not have as concise a phrase, and didn’t consider keeping the sidewalk open to be the goal, on a policy level. “At the time, it provided some level of consistency, but it didn’t get the city where it needed to go,” de Place said. 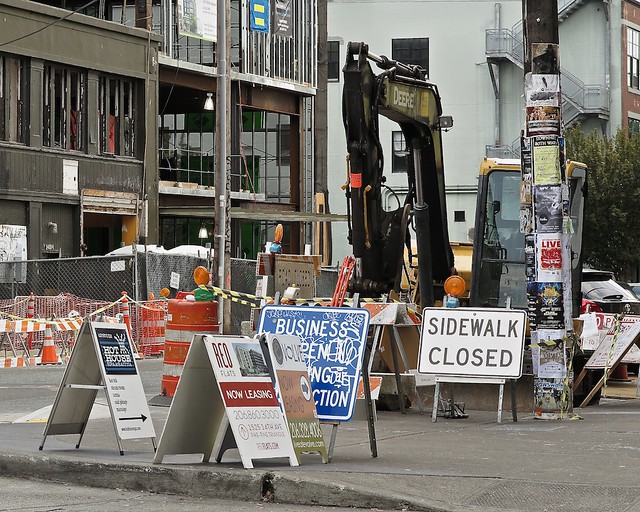 Under the new rules while the default is to keep the sidewalk open, de Place said the department recognizes that may not always be viable or safe, so they’ve developed a series of rules for what to do when sidewalks must be closed. First, they would strive to ensure that the closures would only be temporary. For example, during a demolition phase, it’s probably a bad idea to let people walk right next to an area that could have bricks and lumber dropping from the sky. But that doesn’t mean people should be pushed into the street without protection making for an unsafe route for everybody including bikers and drivers.

During times when there must be a closure, the construction crew and developer should first look to re-route pedestrians but keep them on the same side of the street. Ideally, this is to be done by shifting people into the curb lane of the street. That also comes with its own set of guidelines, namely that the builder must install an impact-rated safety mechanism. de Place expects this will most likely take the form of water-filled jersey barriers, which should replace the mishmash of cones, posts and orange mesh fences.

These barriers, in addition to helping protect people from cars, have the benefit of providing a solid, interlocking surface, which should make them easier to navigate for people with visual impartments who use a cane. In some cases, a fence is allowed, but is required to have a solid surface at the bottom, again to help those using a cane.

If moving people into a protected area won’t work, there are other options, such as installing scaffolding with some sort of cover. Developers might also install a so-called Conex box – similar to a shipping container, Capitol Hill residents might remember the one that had been on John Street during the light rail station construction. Any such boxes or scaffolding are required to have lighting inside.

If none of the options work, there may be some limited sidewalk closures, during some phases of construction. While the rule is only now taking effect, de Place said they have been preparing developers for the change since July.

“We have not been passive on existing projects,” he said.

SDOT got a bit more funding for inspectors, which should help make sure projects are in compliance with the new rules. If they find someone is not, the first step would be to point out the error in the hopes the builder would correct the problem. If they don’t, there is a series of escalating steps, which will eventually result in a stop-work order, but de Place said extreme penalty isn’t in anyone’s interest.

“Our goal is to get them into compliance” he said.

For more details about the rules, see the SDOT blog or read the rule itself.

Mostly as a matter of pride from a Jersey boy and fun trivia, it’s a capital J for Jersey barrier, as that was where they were first developed and used. ;)

Moral of the story: Be sure to report sidewalk closures, because chances are they’re not even legal.

Good for you! I have gotten the contractors on John fined for blocking the sidewalk repeatedly (without providing a human crossing guard) in violation of their permit.

They only get away with this stuff when people like us don’t report it.

I recently got fed-up with parking spaces being blocked-off and called the city and was told the contractor must have a copy of their permit for the days and hours on-site. I’ve started challenging them, and find they often are not permitted. speak-up and let them know and report them.

Next please require that all construction projects be fenced. I’m tired of picking up construction debris and trash from construction workers from around my neighborhood every time a breeze passes through.

I’m looking forward to the townhouse project near me to complete. Its been over 6 years since I’ve been able to use all the sidewalks in my neighborhood with the back to back construction projects. Maybe moving forward this will be less of an issue.

The number of sidewalk closures during the simultaneous building of Pike Motorworks/Cue (Bill’s off Broadway building)/AVA was so frustrating. It felt like I couldn’t stay on one side of the street for more than a block. Countless times there wouldn’t even be a sidewalk closed sign but activity taking place that wasn’t safe for pedestrians at all. I’m so glad it’s almost over in that area (til 95 Slide gets torn down).

This is also an issue in the CD. The large apartment construction project at 23rd and Union has been a huge hassle for pedestrians. The project at 24th and Union is also bad about closing the sidewalk on 24th, but it is easier to do an alternate crossing there than it is at 23rd. I didn’t realize that we could ask the contractor for their permit and/or report them to the city. That is helpful and I will start doing so.