Got a tip? Email CHS.

Stefanie Roberge, an accidental bar owner, says at this point, she just wants to see The Canterbury live on.

“Basically, Capitol Hill Housing wants a yuppie place,” she says of the news CHS broke Monday that the much-loved dive bar was losing its lease for the 15th Ave E at E Mercer corner it has called home since 1976.

Stefanie and her husband David live on 15th Ave E in a house less than stone’s throw from The Canterbury and the Capitol Hill Housing-owned Fredonia Apartments building that she has owned since the late 70s. Roberge bought the house back when much of Capitol Hill was still red-lined and bank loans — especially for a single woman — were almost impossible to procure.

The couple have owned The Canterbury for more than a decade after acquiring it from its original owner Peggy Clark. At the turn of the millenium, Clark was forced to sell the Fredonia and her bar as she struggled to recover from a judgement over The Canterbury’s unpaid employment taxes. Roberge says it was a tragic situation involving Clark’s son, addiction and crippling debt. A buyer for the bar was lined up but backed out leaving a $10,000 deposit on the table. That sudden discount and Clark’s scramble for a buyer led the Canterbury regulars to new careers as barkeeps.

“I love this place,” Roberge said. “I came here as soon as it opened way back when.”

Thirteen years later and more than $1 million in rent later, the Roberges say they are ready to step aside — but they have a few things they want to do before they do.

First, Stefanie says, she wants the opportunity to recoup the couple’s initial $200,000 investment to acquire The Canterbury. Second, the bar has thousands of dollars worth of heavy, tough to move equipment she would like to be able to sell. Third, she wants an opportunity for The Canterbury’s employees to stay together.

“We have the greatest crew — if I could, I’d sell it to my employees,” Roberge said. Unfortunately, she said there isn’t currently anybody from The Canterbury with the financial power necessary to make a deal.

Her hope, then, is to work out an agreement with Capitol Hill Housing to bring in a new buyer to take over The Canterbury who can also live up to whatever expectations CHH has for the space.

While declining to comment specifically on tenant issues, CHH has said that it is open to a food and drink establishment continuing in the space after the Roberge lease is complete at the end of the year. 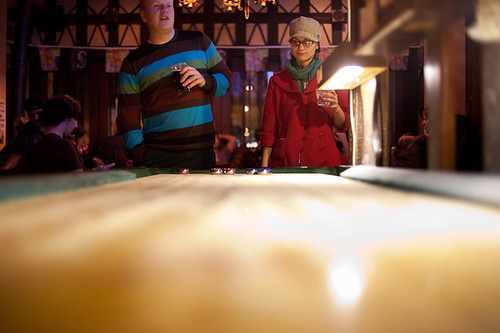 There is clearly demand. CHS has fielded more than a dozen inquiries about availability of the space from representatives and owners of a few neighborhood bars and eateries as well as a few from off Hill. We’re told Capitol Hill Housing’s phones have been busy with inquiries — as well as people inspired to reach out to the nonprofit developer by saveourcanterbury.org.

Roberge says she’s well aware that Capitol Hill Housing holds the upper hand in the situation and that disputes over the years ranging from the terms established in the couple’s initial lease to noise complaints to complaints of property damage in both directions have clouded the relationship.

Through it all, Roberge says the best solution is for The Canterbury to live on — without them. “We’re only hoping that they’ll let us sell it to somebody that they’ll approve of.”

stefanie, if you want sympathy from people than your masochist clientele make your establishment worth visiting. Yuppie places, like it or not, actually do a fairly good job of delivering the fucking goods of a dining/drinking experience. You’re up against smith, liberty, and hopvine, your don’t-give-a-shit attitude towards service is but one of many reasons to patronize these other places in spite of price.

Who are you talking to? I don’t even see a “stefanie” comment.

Read the 1st sentence of the article…

Meh, all those other 15th ave places are pale imitations of a friendly local pub. The Canterbury is the only one where you can just chillax, eat, drink, play some pub games without being harrassed by annoying waitstaff or having to wait half an hour to even get a seat.

I’ve never had service problems at Canterbury. While it’s not my favorite bar on 15th, I always enjoy coming here and hopes that it can continue in some form.

“Yuppie” is such a tired and worn-out word. It meant “young urban professional” which once translated into what we now consider douchey suburbanites hanging out in fern-and-brass bars (very hip in 1983) but now it would equate to hipsters. No one seems to say pejoratively, “They want a hipster bar.”

Everything has its time and eventually. It’s time to move on and let someone else have a chance now. Tired, worn-out, dive bars are dime a dozen on Capitol Hill and as the Hill evolves, people want places who acknowledge that making an effort does matter.

That’s why places like Barrio, Momiji, Unicorn, Poquitos, Fogon, Other Coast, Liberty, Hopvine, Roane XIII, Wandering Goose, etc., have appeared along the main streets of the Hill, and fast food joints are nowhere to be found any longer on the Hill. Venues that do a bad job simply don’t survive (look at the CHS archives for how many restaurants/bars have crashed and burned in less than a year).

If you want a vibrant neighborhood with development and growth and energy, these things come from change. Change takes many forms and this is just another example of it.

How long have you lived on Cap Hill, dude?
Dive bars are no longer dime a dozen, having made way for places such as those you mention above. While some may rather hit up Poquitoe’s for a $10+ cocktail and some overpriced yam tacos, others of us don’t mind a little surly with our $2 tall boy.

If $2 tall boys is what makes a dive then there are a ton of dives on capitol hill.

I was going to say the same thing, but you beat me to it! “Yuppy” is a derogatory and outdated word, and it’s time to stop using it.

Capitol Hill Housing is not the bad guy in this situation…I agree that they have probably been providing low rent for the Canterbury, yet still have not been paid in some months. They have every right to not renew the lease.

Listen, I am no small business person, but doesn’t one “recoup an investment” by building a business that actually makes money and pays its bills? Maybe I am being harsh here, but the Canterbury is more than free to sell their business to the highest bidder, this happens all the time in the marketplace, to recoup their investment. And the value of the business will typically based on how successful the business is. But what we have learned is that they have “a cash flow” problem, and haven’t paid their rent for five months. These two facts lead me to believe that the books probably don’t look so hot. This is no fault of CHH’s – in fact I bet their rent is really low compared to other places on the Hill. And yet, they still cannot cash flow. Seems like there is a lot more going on here than we are being told. If she cannot find a buyer for her business, the only people at fault are the owners.

The Canterbury does not, has never, owed 5 monthes back rent. Rent is market rate, not discounted. Cash flow is a problem becouse every time CHH / the Fredonia floods the Canterbury they take up to a year to pay for damages. Are you a shill for CHH???

Maybe some people here just disagree with you. There has been some coverage of this issue in the Stranger’s blog, including some coverage of the CHH board meeting that community members were encouraged to attend by the Save Our Canterbury website. But from the Stranger’s coverage, it appears you couldn’t be bothered to show up and defend your own bar. Its really hard to sympathize with a small business owner who wants to talk the talk, but not walk the walk. And I find it REALLY hard to buy that its all their fault – your responses here make it all sound one sided – with you the put upon vicitim, and CHH – a nonprofit that operates housing for POOR PEOPLE – is somehow the completely at fault greedy landlord.

Color me not falling off the turnip truck last week.

[…] are more big changes coming for the corner of 15th Ave E and Madison than the impending closure of The Canterbury. A developer already busy on the Hill has quietly filed plans for a four-story, […]

[…] will also likely be competition. CHS has talked with another venture with hopes of bringing their version of Russian dumplings to the Hill. The Russian dumpling is, […]

[…] CHS reported on the Roberges’ desire to sell the revered dive bar that has called the space home since 1976. […]

Personally I am surprised that the Cantebury has lasted this long. Peggy Clark had great success from the time she first opened until early 80’s when 15th began to change and really come into its own. Once places like the Ritz Cafe opened offering a clean, comfortable and friendly environment the Canterbury felt the impact.

The last time I was in the Canterbury was about 8 years ago. It hadn’t changed much since I was there in 1983. Hand written signs tacked to the walls and looking like the last time it was cleaned was 1983. I ordered a beer, took out my debit card and was directed to a hand written sign about a minimum purchase with a credit card. I didn’t realize it would be so difficult to get something to drink. Not so at the Hopvine or in my opinion any other place on 15th. So when I read about cash flow issues, it isn’t a surprise. The cash flowed the same way your customers did…out your door to where their business would be appreciated.

[…] deadline for Capitol Hill Housing to select a new prospective tenant for the Canterbury’s to-be-vacated-by-the-end of 2013 15th Ave E space has arrived. We’re told there is, indeed, a “winner” and negotiations are […]