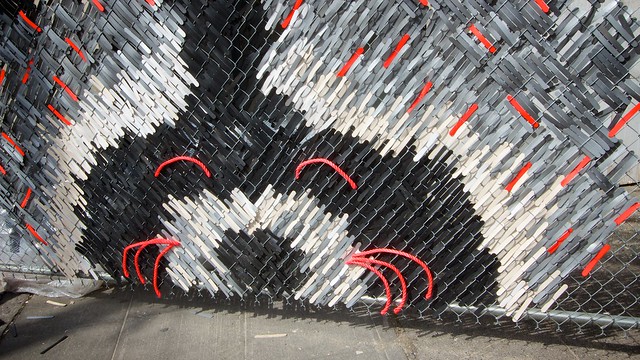 The weird 911 reports from Capitol Hill keep coming. This one involves a frighteningly large masked bandit reported to have bitten a Capitol Hill woman Thursday night.

According to Seattle Fire, Station 25’s Ladder 10 was dispatched to the 700 block of Bolyston Ave E Thursday around 10:30 PM after a woman reported she had been bit by a giant raccoon.

Worse, the woman reported that the approximately 15-pound animal was still outside at the scene. Police were called to assist.

Seattle Fire couldn’t provide information about the extent of the woman’s injuries and SPD’s records for what transpired next are light on details — it’s likely the big raccoon left before police arrived and got away with the crime.

It wouldn’t be the first. A woman reported being bit on the hand by one of the Hill’s plentiful raccoons just before Halloween last year. This attack made news in 2009. Mostly, though, you don’t have anything to fear. Like most of your neighbors, raccoons are extremely intelligent, highly adaptive, and streetwise creatures just looking for something to eat and a place to hang out on Capitol Hill.

Public Service announcer- not your mother

Raccoons—along with foxes (red and gray), skunks, and bats—are considered a primary carrier of the rabies virus in the United States. While any warm-blooded animal can carry rabies, these are the ones we call “rabies vector species.”
If you are bitten, get tested!

oliveoyl
Reply to  Public Service announcer- not your mother

As far as I know (via Wa State Dept of Health) there have been zero cases of rabies being transmitted via raccoon here. My understanding is that the South and rural areas of the NE are the big (though not huge) vectors for rabies in raccoons.

I was just saying to a friend that I have not seen a raccoon on Capitol Hill in a while.

I used to see them pretty regularly around the Harvard Exit, but I imagine the construction on the building has chased them away.

This was me. My punctures were probably from claws and not teeth. The raccoon (I don’t think I ever called it “giant”) was actually going after my dogs though, and one of them did get bitten. We all sought medical treatment immediately. Apparently it’s breeding season so we’ll be seeing a lot more of them out and about.

glad you are all OK, I bet that was scary!

Thanks for the comment. I told Seattle Fire’s spokesperson we’d end up hearing from you! Thanks for filling in all of the blanks. And the giant part came from me based on the 15 pound part!

Is 15 lbs big? It was bigger than one of my dogs but smaller than the other. I have no idea how big they _can_ be. I’m just grateful that one dog, though injured and with stitches, is on the mend, and the other dog and me had even more minor injuries. Also grateful that Seattle Fire and Police were so quick to respond, since the creature was hanging around nearby for a while after the attack. The whole thing could’ve gone down much worse than it actually did.

GS, glad you and your dogs will be ok. I work with the wildlife and can confirm that there’s no risk of contracting rabies from the raccoons here or anywhere in the PNW. Our State hasn’t seen any documented cases for 27+ years. Bats are the only rabies vector species but the risk is also low.

Females queens will be out foraging during the daylight while the kits are back sleeping at the den sites and will continue throughout the summer when she teaches them to forage. The queens will be more protective of her young so use some caution when out walking the dogs.

Because we had a mild winter, we’re likely going to see an uptick of the population. Please secure any food attractants (e.g. garbage, bird feeders, pet food left outside) to avoid feeding the raccoons. When too many raccoons come together it increases the risk of a parvovirus outbreak which can be a risk to unvaccinated pets or feral cats in the area.

Raccoons are not cute, they are evil. If you have a small dog or a cat they will eat it. They especially like the stomach. Whatever you do never feed a raccoon. You will regret it.

I’ve seen a definitely uptick in the rat population around the hood. Must be all the construction.

How did her hand get near a 15 lb raccoon?