Streetcars in Seattle face an uphill battle. As Mayor Jenny Durkan dropped a Good Friday news bomb on Seattle’s plans for the downtown “City Connector” streetcar line, a group of Capitol Hill merchants is working on its own attempt to put a stop to some of the elements of a plan to speed the notoriously dilatory, underperforming First Hill Streetcar route connecting Capitol Hill to Pioneer Square.

“Our priority is the streetcar,” a Seattle Department of Transportation representative told a group of business and organization representatives from the Capitol Hill Chamber of Commerce Thursday at a meeting on a menu of changes based on metrics and ridership being planned to speed up the streetcar through a three-block stretch of Broadway in the heart of Pike/Pine.

“It’s a dagger in small business again,” said Joey Burgess, owner of Queer/Bar and part of the ownership team behind the Lost Lake family of Pike/Pine businesses.

While she did not mention the “Broadway Corridor Streetcar Improvement Project” in her announcement, the late afternoon Friday press release from Durkan should give the Capitol Hill merchants hope their calls will be heard at Seattle City Hall. After the Seattle Times reported last month that the downtown streetcar line could cost 50% more than planned, Mayor Durkan has put a stop on the project until a “full, independent review of the streetcar’s finances” has been completed this summer.

“The City of Seattle has a critical obligation to spend taxpayer dollars wisely and an equal obligation to transparency,” Durkan said Friday. “There are too many questions about the true costs of this project and the risks to taxpayers, which is why we must put the brakes on this project. As your new Mayor, I will continue to scrub our budgets and act to protect taxpayers.”

City officials say the line that would connect the First Hill Streetcar to the South Lake Union route could face a $23 million shortfall as cost estimates have risen above $200 million.

Sound Transit footed the bill for the $132 million First Hill route’s construction and was on the hook for beginning operation costs of around $5 million per year as part of mitigation for the authority’s decision to not build a light rail station serving the First Hill neighborhood. The streetcar is managed by SDOT but operated by King County Metro. 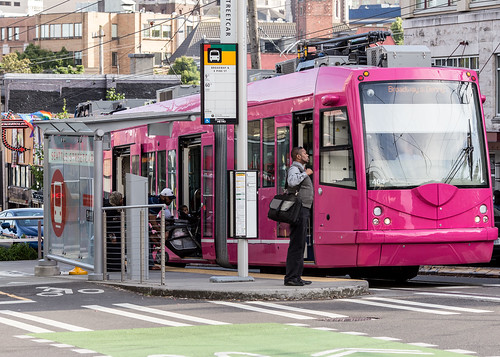 The Capitol Hill Chamber of Commerce members at Thursday’s meeting with SDOT to discuss a proposed four-block southbound “Business Access and Transit” lane on Broadway that would shave off three minutes of travel time and be part of a package of changes hoped to boost ridership by about 10% — 350 riders — per day said they would prepare a letter asking SDOT to reconsider several elements of the plan including the proposed elimination of turns along Broadway around the transit lane.

“This feels like the city is doubling down on something that wasn’t that great of an idea to begin with,” Tracy Taylor of Elliott Bay Book Co. said of the Broadway reconfiguration proposals.

Unlike the downtown streetcar line’s millions, the work being proposed for this summer to speed up the First Hill Streetcar line would only cost around $50,000 to $75,000 to implement, SDOT’s Jonathan Dong said. The low price tag did not make the project more enticing. “I worry about the people who work for us,” nightlife owner Burgess said. “I would like them to be able to get to work the easiest way possible. We’re making things really hard for people who have been pushed out.”

SDOT officials have said they hope to complete the outreach on their plan this month before working with the mayor’s office “to make a final determination on a path forward” for the changes to Broadway hoped to improve performance of the First Hill Streetcar as it shares traffic lanes with cars, trucks, and buses along its 2.5-mile route. Dong said that following SDOT analysis and feedback, the decision the Broadway changes would ultimately fall to the mayor’s office. There are still plenty of Broadway constituents to meet with. “I have to meet with QFC next, Dong said Thursday.

The First Hill Streetcar opened in January 2016 to little fanfare after long delays and years of construction to begin service on the new line connecting Pioneer Square to Capitol Hill via First Hill. The 2.5-mile route shares streets with vehicular traffic and, as a result, is subject to slowdowns that also snarl buses and commuters in cars. The line was projected to serve more than 1.2 million riders in 2016, but only 840,000 passengers were tallied by SDOT’s estimates. About 3,500 riders were riding the streetcar daily earlier this year, according to SDOT.

The Capitol Hill Chamber of Commerce members haven’t necessarily been anti-transit. The group played a major role in planning the commercial development around Capitol Hill Station and was generally supportive when Sound Transit opened the U-Link extension and the new station below Broadway in March 2016. The station has grown to serve around 7,000 riders a day at the stop. In August 2016, Sound Transit signed a 99-year lease with Gerding Edlen to develop the properties it had acquired surrounding the station. Groundbreaking on the major housing and commercial development is expected to finally take place this spring.

The streetcar — and its associated changes to Broadway — remain a sore spot. The Capitol Hill business group’s issues with the streetcar Thursday ranged beyond the elimination of left-turns and the addition of red paint for a transit-only lane. The group also discussed the Broadway bikeway and asked the SDOT representative whether it was possible to discuss moving the lane — designed to help keep bike riders away from the dangerous streetcar tracks — to 12th Ave. “Put that in the letter,” the SDOT representative suggested.

While the idea of a letter of complaints about a proposal may not sound like a major barrier, the direction for most things streetcar related on Capitol Hill lately has been backward. The 1st Ave streetcar route halt and the small business dissent over planned changes to improved the existing First Hill line follow the slow mothballing of the $28 million plan to extend the line up Broadway and build a bevy of pedestrians and bicycle friendly upgrades on the street. The backtrack forced SDOT into the position of handing money back,  working with the streetcar’s grant agencies to return approximately $10 million worth of grants. “I would describe it as indefinitely deferred,” the Seattle Department of Transportation’s transit and mobility director Andrew Glass Hastings told CHS in October. “That project is pretty much designed. That design is still useable should we decide in the future, in conjunction with stakeholders up on Capitol Hill.”

Given what members of the Capitol Hill Chamber of Commerce had to say at Thursday’s meeting with SDOT, it seems unlikely those stakeholders will be friendly to this kind of investment in public transit for a long, long time.

A correction to my comment about doubling down. The City frequently comes up with a bad plan and instead of pulling back, they double down. The bad plan here is the way they set it up on Broadway and the bike lane that doesn’t work. The bike lane should have landed on 12th and the streetcar should have been given it’s own lane. This was pointed out on multiple occasions before the streetcar work started. Now it doesn’t work and SDOT is looking for the cheapest possible way to give the streetcar it’s own lane. If this happens, it will severely impact businesses in multiple ways.
Whether or not the streetcar itself is a good idea…….I don’t know enough about the ridership.