Capitol Hill squirrels. They’re amusing and cute to some. Considered hirsute rats by others. Ultimately they are one of the only non-domesticated mammals we see on a daily basis. So, if you feed birds you might have developed a bit of rage towards them. Every day they’re there, little tree climbing pigs, gulping down your birdseed, and hiding peanuts in your flower beds.

Though corners of greater Seattle have holdouts of our native tree squirrel, the Douglas Squirrel, the only squirrel on the Hill is the Eastern Gray Squirrel (Sciurus carolinensis). Like many of our day to day urban species, they are not native. They hail instead from east of the Rocky Mountains. They are here because of us, which as I have continued to repeat, is not a real reason to hold grudges. (Though for people who feed birds all across this country, indigeneity matters not.)

Tracking down the details of their first arrival is difficult, but sometime in the early 1900s eastern gray squirrels started to arrive, either purposefully by our hands (by being released) or accidentally in our conveyances (just imagine a happy squirrel riding west in a cargo load of Iowa commodity corn). Their arrival was timed well, because it was when cities in the Pacific Northwest were charging ahead to replace native flora with trees that reminded them of back East or even Europe. Gone were the massive conifers and in their place open spaces filled with oaks and beeches, food and shelter for our little squirids. The gray squirrel arrived, and despite there already being native “tree squirrels,” found parks and city streets being colonized by trees that favored their existence.

With the welcome mat laid out, eastern gray squirrels have done what adaptable rodents do best. They’ve insinuated themselves into every nook and cranny of our urban and suburban landscape. (It’s worth noting that while we consider many rodents capable, resilient species, many are very sensitive and evolved within specific ecosystems – 8 of the 9 mammals listed as threatened by Washington state are rodents.) Native western gray squirrels (Sciurus griseus) are intolerant of habitat change, and likewise Douglas squirrels (Tamiasciurus douglasii) and Townsend’s chipmunks (Tamias townsendii) have probably been edged out by the larger, more aggressive eastern grays, (who are also predators happy to chow down on the babies of smaller squirrels). Thus, we find ourselves today, watching eastern grays gambol about power lines, antagonizing our dogs, and flicking their tails in annoyance at us like they own the place. 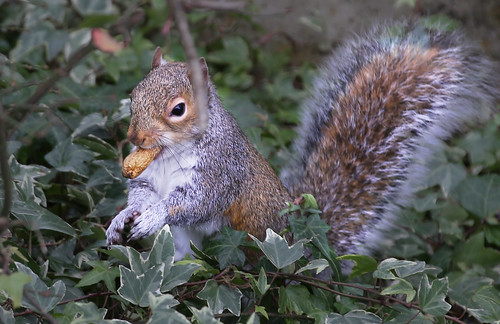 Like so many of the organisms we share our city with, we can’t be completely rid of them. Growing up, my dad tried. He live-trapped them and took them to Bellevue in his beaten down old Datsun truck. He released them in the parking lot at this work. Not only did this make no impact on their population at our home in Greenwood, it made the parking lot attendants rather upset. So how do we live with squirrels?

For the vast majority of us, it’s not that hard. As long as you avoid feeding them by hand, which they easily take to, and don’t give them easy openings into buildings, it’s fairly easy. They’re just rodents that run about in the daylight and don’t generally spread disease to us, unlike Norway rats (though their presence in the UK has brought a squirrel pox to their native Red Squirrels which are locally endangered). But there’s that whole bird feeding thing.

I have plumbed the depths of squirrel hatred and come out on the other side, so I feel I am capable of talking about this issue calmly. Eastern gray squirrels are bulky, have high metabolisms, and don’t hibernate; they eat a lot of food. When you spend your hard earned dollars on birdseed and it disappears down the gullet of a creature who also chews your feeders to bits, it’s understandably distressing. However, instead of getting hysterical and building squirrel obstacle courses or doing unspeakably cruel things to animals just trying to survive, we can take sober steps towards uninviting them.

Eastern Gray Squirrels are impressive when they want to get somewhere high and out of reach. You can’t just hang your feeder on a wire, they’ll crawl down it. Put it on a pole, no matter how slicked down with bacon grease, they’ll figure out how to shimmy up. Think there’s no way they can jump that far? Surprise! Most can jump 5 feet vertically, seven feet laterally, and even 9 feet when dropping in from above using techniques adrenaline junkies dream of (and name their flying-suits after). 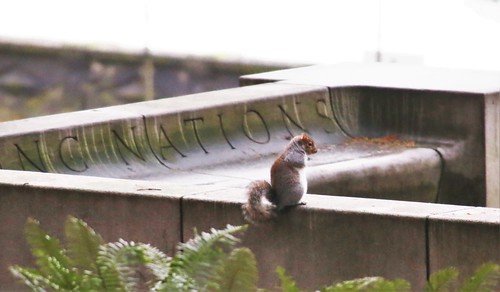 So what’s there to do? Thankfully some thoughtful people have channeled their rage into products that restrict squirrel access. There’s the line of feeders called Squirrel Busters
which mechanically restrict squirrels when they attempt to climb onto the feeder, but allow birds because they’re light as a feather (see what I did there?). There’s the Yankee Flipper which is a battery powered monstrous reservoir that rotates as soon as something heavy enough to activate it’s motor touches the perch (often spilling seed everywhere, giving the squirrels more incentive to take a spin). There’s the caged feeders that are impossible to clean (read the post about why it’s important to clean feeders), but allow slim avian forms through and restrict bulky rodents). And there’s good old fashioned baffles that you put over your feeder or around the pole that holds them. Some go so far as to buy seed and suet laced with pepper, which gets expensive and may not work as well as desired.

So now you know: there are options. Please just don’t do this. But hey, this is pretty impressive.

Some people just give in and provide an alternative food source. I wouldn’t necessarily recommend this on the Hill, because this will also attract rats. But oftentimes, a nice bunch of peanuts will keep squirrels busy (particularly because they are scatter hoarders, they cache food like crazy and have remarkably good memories). Some silly people even make little
adirondack chairs and picnic benches for happily chubby squirrels to congregate around. My favorite option comes from Archie McPhee.

Eastern gray squirrels might not be welcome at our bird feeders, but they have become a well known component of our urban fauna. At a certain point in my cycle of rage towards them, it started to feel like a lot of energy to be mad at them all the time. They’re food for Cooper’s and Red-tailed Hawks. They’re also fairly good looking if you take the time to enjoy their delicate coloration. They’re undoubtedly fun to watch when they get frisky and chase each other about or make daring leaps from limb to limb. So, when I think a little bit about it, I have to admit I would miss the squirrels if they were gone.

What a fun article and the links are great, got lost in humorous squirrel antics for the morning. 👍🏽 👍🏽

What a terrifically informative article! It teaches we all have our place, including the Eastern Gary squirrel. The challenge, as you intimate, is to figure out how to coexist together. I like the squirrels. They are intelligent, and on Seattle’s grey quiet days can be the only form of life roaming the yard. They are also incredibly industrious, from dusk to dawn. Far more than their human counterpart, which is true of most rodents, animals, and insects. They show joy by chasing each other, and I am sure have a range of emotion just like us. I have a video of one flirting with our cat, and vice versa. That was quite a moment. They used to grab my bird food, which suggested to me they wanted their own food. So voila, their dreams were answered when I bought a simple doughnut-shaped feeder that holds peanuts, and I put handfuls in regularly, which they, as well as the Stellar Jays that frequent, most appreciate. We live in a society that is often cold, distant, and unfeeling. For me, and perhaps for others, a communion with nature in the proximity of one’s backyard, can often provide a much needed respite for the spirit, and for at least a moment each day I feel that i am at peace with my other-specie friends.

Of all the animals on the hill the squirrels are in running with the local rabbit population as the cutest animals. I went to Volunteer park and got a cute pic of one that was chatting away with me. He/she just sat next to me chirping away like a little person. :)

squirrels are a wonderful asset for Capitol Hill and i always enjoy watching them. when we had a house and yard of our own we specifically fed them. so much better than unleashed dogs and cats wreaking havoc.