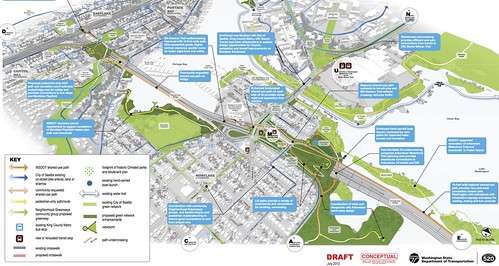 Having been thoroughly rebuffed in their legal effort to halt the western plans for the new freeway, Sustainable 520 and the North Capitol Hill Neighborhood Association head Pegeen Shean have turned their sights toward reducing the size of a new Portage Bay Bridge by fighting to eliminate a biking and walking trail from the plan:

The North Capitol Hill Neighborhood Association opposes the addition of this bike lane for several reasons.

The Montlaker blog reported the text of the letter above sent to the City Council. Montlaker also reported that Sustainable 520 is rallying similar support for Monday’s City Council session discussing the western 520 project and decisions around eliminating the plan for a second Montlake Bridge, an issue in which the community groups already appear victorious.

For more on the Montlake Bridge recommendation, see this Seattle Transit Blog post.

The North Capitol Hill and Sustainable group’s push-back on a bike and walk trail as part of the new 520 is especially frustrating to city planners and transit and biking advocates who are working to improve the city’s infrastructure for multiple transportation solutions — not just single occupancy vehicles.

The Capitol Hill group’s leadership told CHS in 2010 that it represents around 600 households in the northern edges of the neighborhood, including some of the wealthiest streets in the area. No minutes for the community group have been posted to its site in the past year — the site has also been offline today —  but Shean and others have been active in issues around 520 and other neighborhood development. Their Facebook group is here.

Seattle Bike Blog’s Tom Fucoloro — who also runs our sister site Central District News — described the opportunity the 520 changes are leaving off the table because of the neighborhood opposition:

The project is currently working through draft designs, and their proposed bridge design includes a 14-foot biking and walking trail (four feet wider than the I-90 Trail) from Medina to the new Montlake lid, which will include access to the Arboretum, the Montlake Bridge (and UW Station at Husky Stadium), the Burke-Gilman Trail, the Lake Washington Loop bike route and the Bill Dawson Trail to Montlake Playfield. WSDOT is looking to build a new paved biking and walking trail through the Arboretum and is looking to widen and improve sightlines on the Bill Dawson Trail under 520 between the new lid and the Montlake Playfield (great news!).

The Delmar lid includes a connection to Harvard Ave south of 520 toward Capitol Hill and downtown. A connection to Federal Ave is also on the list of potential options, opening up the possibility for a neighborhood greenway on the popular-though-poorly-paved road.

However, plans are inexplicably missing a biking and walking trail to connect trails in Montlake with trails on this new Delmar lid. Project planners say it is missing because many nearby residents requested that they make the bridge as skinny as possible to avoid casting extra shadows and obstructing views. In essence, WSDOT seems to want to pit people who want biking and walking access on the Portage Bay Bridge against people who are concerned about views.

Even with the flurry of opposition and Monday’s hearing, there is still time for the city to shape these issues. Planning chair Richard Conlin said this morning that the Council will provide its final recommendation on the 520 issues in “November or December.”

The bike/pedestrian pathway wouldn’t add that much width to the bridge. The current plans call for a 6′ wide landscaped median on the bridge, which would be removed if a pathway is added. Therefore, a 14′ wide pathway would only add 8′ to 10′ of width. Is that really significant on a 168′ wide bridge? I don’t think so.

The real problem is the monstrous car bridge. But WSDOT won’t budge on that, so pedestrians and bikers are the ones who’ll get screwed when neighborhood groups find a way to try and downsize the bridge.

Only have to look as far as the West Seattle bridge to see what “upgrading” a bridge really looks like.

Monolithic, grey, ugly and of almost no use to walkers and cyclers.

That bridge was once slender and quite different. I realize things change, but wider will not always be the trend for concrete lanes (I hope). Where would that end?

Every project I’ve seen “redone” resulted in fat lanes and giant intersections with slow traffic lights and little true consideration for anything but the vehicles involved.

Sustainable 520 definitely looks to be showing their true colors here. You’d think from the name they’d be for anything that increases peoples’ options for getting around conveniently without needing a car. In reality it looks like just a greenwashed name for a group that simply wants to protect their views and their property values. Perhaps that’s something worth fighting for, but it really gives the lie to their name and their true purpose here.