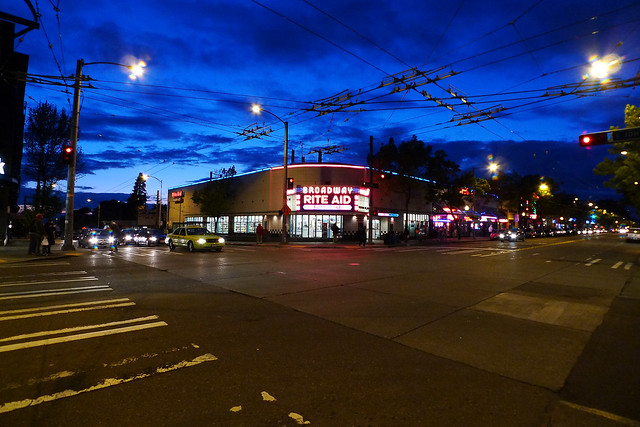 Call it an all-walk, a scramble intersection, or a diagonal crossing, some community members say the intersection at Broadway, John, and E Olive Way needs one. But the Seattle Department of Transportation isn’t quick to OK an intersection that would stop cars in all directions and allow all pedestrians to cross.

Dongho Chang, a city traffic engineer, said those kinds of crosswalks can have unintended consequences and increase delays for everyone. But Chang said the increase in foot traffic in the last year since Capitol Hill Station opened in March does warrant additional analysis of the intersection.

“We definitely want to look at how to improve conditions for them,”  Chang said of the increasing number of pedestrians traveling through the intersection.

Chang said a new analysis was planned to begin this week.

The decision follows the Friday, February 3rd collision reported by CHS in which a driver slammed into a woman as she attempted to cross E Olive Way on the west side of the intersection. The pedestrian survived. But the incident brought new attention to the possibly dangerous situation developing around the busy, complicated stretch of Broadway where two major arteries intersect, and a busy mix of public transit including the light rail station and Metro bus stops converge.

If the problem is left turning vehicles, Chang said left turn pockets or restricting left turns can improve the intersection for everyone.

SDOT wants to make sure any infrastructure changes are “really holistic,” he said, and meet safety and mobility needs.

While the crossings and others in the area have been studied as a part of the planned, but now on hold, streetcar extension, the area’s street use hasn’t been analyzed since Capitol Hill Station opened.

“The volumes have changed significantly since the light rail station opened up,” he said.

Already one of the busiest Capitol Hill areas for pedestrians, the Broadway/John/E Olive Way crossings have become even more active since the opening of the station on the intersection’s southeast corner. Last summer, CHS reported on a study showing street and crossing dangers around the station. Late last year, intersections from Capitol Hill Station to Miller Park were selected for major pedestrian improvements though the project does not seem to include the western edge of the intersection across E Olive Way.

The Capitol Hill Chamber of Commerce has been asking the city to make the intersection an all-way walk since last July, executive director Sierra Hansen told CHS. She was told the pedestrian count didn’t support it, but “never got a clear answer” when the last count was completed.

In a letter CHCC sent to Scott Kubly at SDOT in July, Hansen wrote of the chamber’s support for lowering speed limits on arterial and non-arterial streets but suggested more should be done.

“Lowering speeds is only one part of the solution, and the CHCC would ask the City to consider improving safety for vulnerable users such as pedestrians and cyclists,” Hansen wrote. “Capitol Hill has tremendous transit options, residential and commercial density that make it a “walker’s paradise” according to walkscore.com. However, there are areas that continue to be of concern, such as the intersection of Broadway and John, according to a recent Seattle Greenways study of the neighborhood.”