Health officials say the December 23rd death of a man found unconscious with two other people also suffering suspected fentanyl overdoses in a Boylston Ave apartment is part of an “Overdose Cluster” identified in the neighborhood.

Public Health – Seattle & King County says three people have died as part of two overdose events in the neighborhood. CHS reported on the Thursday, December 23rd incident here in which one person died and two others were reported revived by Narcan and taken to the hospital after a neighbor saw the man slumped through the apartment window and called 911.

Public Health could not immediately provide information on the two additional deaths or the second incident identified in the cluster but confirmed the three deaths among the six reported people who overdosed. END_OF_DOCUMENT_TOKEN_TO_BE_REPLACED

One person died and Narcan helped revive two others after a group suffered overdoses Thursday night in a Boylston Ave apartment. A worse tragedy may have been averted thanks to an alert neighbor.

According to Seattle Fire, crews were dispatched to a building in the 1400 block of Boylston around 8 PM Thursday night after a 911 caller said they could see a male in the apartment unit across from their building slumped on a barstool against a window.

Seattle Police and arriving medics made entry into the fourth floor apartment and reported three patients at the scene including the unresponsive male and two other patients suffering from a suspected drug overdose. Seattle Fire crew members administered Narcan opioid antidote and began CPR on the occupants of the unit. END_OF_DOCUMENT_TOKEN_TO_BE_REPLACED

The Seattle City Council Monday approved a resolution asking Seattle Police to not enforce laws against drugs like magic mushrooms.

The resolution from Councilmember Andrew Lewis directs SPD to deprioritize arrests related to drugs including psilocybin despite federal restrictions on the mind-altering substances.

In 2020, Oregon became the first state to legalize psilocybin for mental health and therapeutic use. END_OF_DOCUMENT_TOKEN_TO_BE_REPLACED

Officials say counterfeit pills made to look like pharmaceuticals such as oxycodone but actually containing fentanyl are a growing problem. In addition to increased efforts to crack down on the drug trade, the City of Seattle is also hoping to help more people survive overdoses.

“Fentanyl and counterfeit oxycodone pills laced with fentanyl are spreading throughout our communities, and we must continue to combat this growing crisis. Naloxone can reverse overdoses – these kits can truly save people’s lives,” Durkan said in the announcement of the effort. END_OF_DOCUMENT_TOKEN_TO_BE_REPLACED

Neighbors near Capitol Hill’s Volunteer Park saw a peculiar scene unfold Wednesday night as Seattle Fire personnel carefully brought an envelope containing a suspicious white powder out of a home on the block and into the front yard. Fortunately, this wasn’t a terrorist attack on a single family home. Instead, the suspicious white powder turned out to be a drug, a Seattle Fire spokesperson tells CHS.

SFD was called to the home around 9 PM to a report that a suspicious envelope found at the address contained an unknown powder. END_OF_DOCUMENT_TOKEN_TO_BE_REPLACED

A man investigators say has been dealing marijuana, coke, oxy, and Adderall out of a Capitol Hill apartment for years has been arrested and charged with federal drug crimes after being nailed by Seattle Police detectives working in conjunction with Homeland Security and the King County Sheriff’s Office major crimes unit.

Cash seized by police was so filthy with drugs, investigators wanted Narcan on hand before they dealt with it

A picture of Smith and his daughter the convicted drug dealer included in his plea for leniency to a U.S. District Court judge

An April 2017 overdose death in an E John apartment brought down the man prosecutors say was the kingpin opioid dealer on Capitol Hill until his arrest, prosecution, and sentence this week to twelve years in prison.

Gregory Smith, 34, “was a primary—if not the principal—opioid dealer in Capitol Hill,” prosecutor write. “Beginning in mid-2016, Smith’s ability to source massive amounts of fentanyl analogues from China only further reinforced his status as the go-to dealer in this area of Seattle. His personal impact upon the opioid crisis in Seattle was substantial.”

“A sophisticated trafficker, trading in cryptocurrencies, working with overseas suppliers, knowing not to deposit large quantities of cash into financial institutions, and amassing an arsenal of weapons and a security system to protect his assets and supply,” Smith was sentenced this week to 12 years in jail in a plea deal following an investigation that traced more than 70 shipments of fentanyl analogues to the Des Moines Memorial Dr S dealer from China.

Smith’s co-defendant Kyle McClure was also convicted of conspiracy to distribute a controlled substance and sentenced to two years in jail, according to court records. END_OF_DOCUMENT_TOKEN_TO_BE_REPLACED

Thursday afternoon just after 1 PM, Seattle Fire medics fought to revive a 29-year-old found unconscious after overdosing inside his 10th Ave E apartment. He was taken to Harborview in critical condition. Another rescue took place just blocks away Sunday as medics revived an overdose victim on the Bobby Morris playfield. Wednesday morning, Seattle Fire could not revive a man in his 20s who died of an overdose at a homeless camp in the greenbelt below Capitol Hill’s Louisa Boren Lookout.

Thursday at City Hall, a Seattle City Council committee heard an update from the Heroin and Prescription Opiate Addiction Task Force on its progress to form a plan to help stem the tide of overdoses with a safe consumption site in the city where people addicted to drugs can come and shoot up — and not be alone. But the years-long process is still not close to finding a site for such a facility, officials said Thursday. The new plan, if the city wants to get something in place anytime soon, officials say, is to buy and deploy a “community health engagement” van that would be deployed daily to a dedicated site but would not roam the city.

“When we began to look at all the various options we realized the city doesn’t own a lot of buildings and the buildings we do own often times community centers or park related centers,” task force member Jeff Sakuma, Mayor’s Office said Thursday. “And obviously those would not be appropriate types of building sites.” END_OF_DOCUMENT_TOKEN_TO_BE_REPLACED

A Capitol Hill parking lot was the scene for a big drug bust last Tuesday afternoon that authorities say resulted in the seizure of more than 300 pounds of methamphetamine.

The U.S. Attorney announced that Adrian Perez, 41, was arrested and charged for possession of cocaine with with intent to distribute after a March 13th bust in the parking lot behind the Vox Apartments at 15th and Pine in which police say the suspect “tried to take possession of 18 kilos of cocaine he intended to transport for a Canadian drug trafficking organization” — END_OF_DOCUMENT_TOKEN_TO_BE_REPLACED 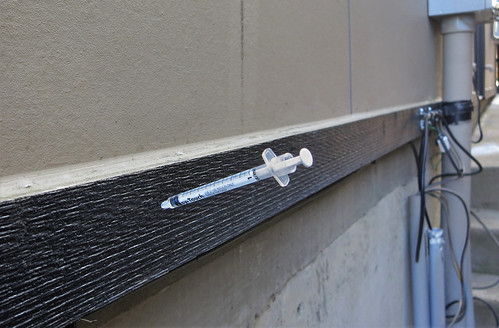 Officials say the one-of-a-kind Seattle program is part of a group of test initiatives related to clean streets and safety. END_OF_DOCUMENT_TOKEN_TO_BE_REPLACED