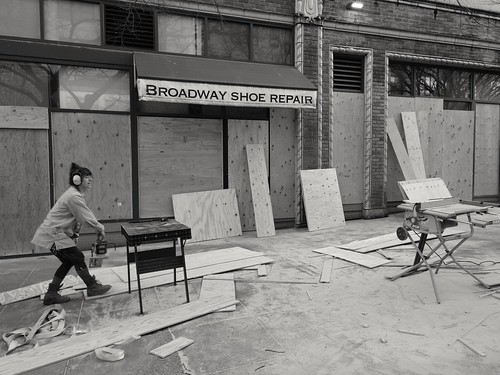 Seattle University, one of the Capitol Hill area’s largest employers, will furlough 79 staffers and begin “mandatory and voluntary pay reductions of up to 20%” due to the economic impact of the COVID-19 crisis, the Seattle Times reports.

Seattle U says it has lost $7 million due to the costs of remote instruction and closing its residence halls, and is planning a $9.1 million budget cut for the next fiscal year.

Seattle Central and its public Seattle community college system, has also transitioned to remote learning. The colleges have not announced furloughs or cuts at this time. CHS reported on Seattle Central’s struggles to keep up with changes brought on by the crisis in the early stages of the outbreak.

Seattle U employs more than 500 full-time and another 200 or so part-time faculty and maintains an enrollment around 8,000 students. Most experts predict enrollment at private colleges will be hard hit by the long term economic impact of the crisis.

Washington totals have reached nearly 600,000 in need of unemployment benefits, the state reports:

During the week of April 5-11, there were 143,241 initial and 585,983 total claims for unemployment benefits, according to the Employment Security Department (ESD). While initial claims declined 16% from the previous week, it was still the third highest weekly number on record and five times more claims than the peak week during the Great Recession. Total weekly claims are now the highest on record.

Washington’s Employment Security Department says it paid out $125.9 million to 265,798 unemployed workers the week of April 5th, a $45.6 million increase from the previous week. “Since the start of COVID-19 job losses the week ending March 7th, the department has paid out nearly $272 million in benefits to Washingtonians,” the update reads. END_OF_DOCUMENT_TOKEN_TO_BE_REPLACED

To help respond to community hopes, requests, and suggestions, the incoming PCC grocery store at 23rd and Union is planning to hold two public meetings later this month. Meanwhile, after company officials pledged to try to hire about half of the new store’s staff from the surrounding area, PCC has also announced an upcoming job fair.

CHS broke the news last week that the Seattle cooperative grocery chain was set to replace financially troubled New Seasons in a supermarket space waiting for its new tenant on the northwest corner of 23rd and Union. END_OF_DOCUMENT_TOKEN_TO_BE_REPLACED

Newly opened businesses in the area around Capitol Hill and the Central District might give an indication of one of the growing needs of a booming population.

Mental health care providers have brought their practices to the area to meet the exceeding demand for centrally located counseling services. In 2017, CHS noticed that the City of Seattle recorded counseling offices to be the second highest number of new businesses in District 3.

“I was busy immediately and had as many referrals I could take from the get go,” said psychotherapist Lisa Hake, LMHC GMHS, who moved her practice from Bellevue to Madrona last year.

To be a licensed mental health care practitioner, providers must have a minimum education of masters degree and meet Washington’s licensing requirements. Reported lowered barriers to access and decreased stigmatization has led to overall industry growth, while the rise in business locally is attributed by many we spoke with to a widespread increase of anxiety, spurred by our current socioeconomic and political landscape. “You can’t say to people that this is a safe place anymore, the world. It really wasn’t before, but it’s obvious now that it’s no longer true,” said Jason Franklin, LMHC in Madison Valley. Franklin primarily works with intersectionality. END_OF_DOCUMENT_TOKEN_TO_BE_REPLACED

Hey kids! Get a job! A bunch of Capitol Hill and nearby businesses and organizations will be at 19th Ave’s Miller Community Center this weekend for a job fair designed for LGBTQ youth… and their friends.

The LGBTQ and Allies Teen/Youth Job Fair 2017 is part of the Seattle Parks Teens program and will feature “over 24 employers and organizations with lots of jobs, stipend opportunities, and internships for youth ages 14 – 24,” the department says.

Bring your resume and a confident but friendly handshake. None of this Donald Trump power play stuff, please.

A jobs program created to help African Americans in Seattle with criminal backgrounds and other “barriers to employment” find work that became a hot button issue during the election may have emerged as the biggest winner of the race for District 3.

Over the course of last year’s election season, funding for Career Bridge — a workforce re-entry program managed by the Urban League that connects men of color with barriers to employment (like criminal records or homelessness) to jobs and social services — was championed by the final two contenders for the District 3 seat: socialist incumbent Kshama Sawant and Urban League CEO Pamela Banks. During a September press conference on gun violence in Seattle, Banks said Sawant wasn’t prioritizing the issue and promoted her public safety program which included doubling the funding for Career Bridge. Sawant later praised the program at a District 3 candidates debate and, a few months later during the city council’s haggling over the 2016 budget, lawmakers voted to increase its funding.

Mayor Ed Murray’s original 2016 budget proposal didn’t include any additional money for the program, so council member Sawant — fresh from re-election — publicly went to bat for doubling the city’s allocation from the original $400,000 to $800,000. Some behind-the-scenes haggling went down between Sawant, former budget committee chair and council member Nick Licata, and Tim Burgess, who wanted $200,000 instead, telling CHS that the Urban League wasn’t in a position to effectively spend $400,000 in 2016 alone. Banks said Sawant’s office had not contacted the Urban League about her proposed $400,000 amendment. Licata negotiated a compromise, opting for Burgess’s $200,000 as well as an additional $200,000 for the City Human Services Department to allocate for general jobs programs — money which the Urban League can apply for. All-in-all, it was a win for Career Bridge.

Banks partially attributes the council’s support for the program to the attention Career Bridge got on the campaign trail. “It was a campaign issue so it was pretty darn easy [to get more funding],” Banks told CHS. “They supported it more because of the campaign.”

But while more funding for Career Bridge wasn’t exactly a hard sell for last year’s council, the program has faced cautious skepticism from city lawmakers over the course of its budding three-year lifetime.

The program was conceived under the wing of former Mayor Mike McGinn, who, after a spike in gun violence in 2012 and meetings with organizations, advocates such as the Black Prisoners Caucus and Village of Hope, and leaders in the African American community, allocated $210,000 in the 2013 city budget for a week-long pilot of Career Bridge with fifty participants to be jointly managed by City’s Office of Economic Development and the Human Services Department. An audit of the program was also ordered along with the initial funding, which continued its review through 2014.  In the spring of 2014 management of the program was transferred to the Urban League, and a hike in funding to $400,000. Then McGinn lost his reelection bid to Ed Murray in the end of 2014, ushering a key anchor for the program out of City Hall.

“After McGinn lost, I had to reach out [to the Murray administration] and say don’t kill this,” said Banks. “There was some hesitancy [on the old city council]. That’s the reason the audit was done.”

But the audit report came back in the summer of 2015 with a glowing review of the pilot, with 81% of the initial batch of participants from 2013 and 2014 finding employment after graduation of the brief course. More specific and recent numbers follow the same trend. END_OF_DOCUMENT_TOKEN_TO_BE_REPLACED

The mayor with the mayor (Image: CHS)

Michael Wells is barely out the door but it’s time to start seeking his replacement to lead the Capitol Hill Chamber of Commerce — a role that basically makes you the Mayor of Capitol Hill:

The Executive Director will lead the development, management, and execution of all Chamber programs and projects including and especially the creation of a new Business Improvement Area (BIA). This includes managing all staff, budgets, and contracts for the organization. The Board of Directors will provide strategic leadership in identifying the Capitol Hill community priorities and oversight of the finances of the organization. The Executive Director must work effectively with city leaders, multiple city departments, and local business & community leaders.

It is the largest manufacturer on Capitol Hill hidden in plain sight. Everyday Richmark Labels prints millions of labels, mostly for consumer products, from its warehouse in the heart of Capitol Hill at 11th and Pine.

Maybe it was the beige exterior — now in the midst of transformation — or the large maple trees that camouflage the building’s true size, but, for 45 years, Richmark has been churning out labels at all hours of the day and night, relatively unnoticed.

In 1970, owner Bill Donner moved the business from downtown to the former auto garage on the southeast corner of Cal Anderson Park. He has been running the business since he was 22 after his father started it decades earlier. The company originally printed buttons and award ribbons, transitioning to adhesive labels after they were popularized in the 1950s.

“It’s not because we make things nobody else can make,” Donner said of his longevity in the business. “We’re just faster than anybody else and… I’ve developed systems for manufacturing and selling.” END_OF_DOCUMENT_TOKEN_TO_BE_REPLACED

Above, a 1906-built house on Malden Ave E awaits the start of its move a few dozen yards to make space for a new townhouse project

The Department of Planning and Development earlier this month released a revised Development Capacity Report as part of its every 10-year review of the city’s Comprehensive Plan. The full report is embedded at the bottom of this post.

According to the report’s estimates, under current zoning, Capitol Hill could add more than 19,000 residential units to its existing 26,600, an increase of about 71%. In the report, Capitol Hill includes the sub-areas of Capitol Hill, Pike/Pine, First Hill and 12th Ave.

The commercial side could see an increase of more than 950,000 square feet of space, in addition to the existing 11.9 million square feet. This would translate into enough space for about 3,200 more jobs, above the current 40,100, an increase of almost 8%.

The forecasts and estimates will play a big role as Seattle sets about updating its next 20-year plan by mid-2015. In the meantime, rents in Seattle are rising faster than in any other major U.S. city — and, as any renter was probably sad to read on CHS, they’re rising even faster on Capitol Hill.