Homelessness activists continue their efforts to occupy and transform the Cal Anderson Shelterhouse into a facility to provide services and resources to the area’s underhoused community. The need is clear. Just a block away at the corner of Broadway and Pine, a major project is moving forward to redevelop the historic Booth Building and a neighboring auto row-era structure into roughly 100 units of low-income housing and an “education and employment academy” for homeless young people.

“We really felt like it was a stand to say this corner is a place of learning and hope and justice for young people who have often been very much left behind by the progress that this city has seen over the last two decades,” YouthCare spokesperson Jody Waits said.

YouthCare is partnering with Community Roots Housing on the project for an expected 2022 start and 2024 opening. The final construction details and price tag of the project are still on the table, according to Waits, although the nonprofit is expecting to serve 250 to 300 individuals ages 18 to 24 per year at the training academy. END_OF_DOCUMENT_TOKEN_TO_BE_REPLACED

The concept for the 523 Hilltop project (Images: Studio Meng Strazzara)

The last time this Capitol Hill developer and the architects from Studio Meng Strazzara hooked up, they created an eight-story project designed to set the standard for Pike/Pine preservation and redevelopment. On 15th Ave E, Hunters Capital won’t leave any motor car history to work with as it prepares to demolish the Hilltop Service Station and continue the work to slowly repair the soils beneath from decades of contamination — but the proposed design for its coming 523 Hilltop building is inspired by Capitol Hill’s auto row past.

The Colman Automotive Building entered the National Parks Service’s National Register of Historic Places very recently — in 2013. It is not currently a City of Seattle Landmark, but the national listing is good enough for it to make our Landmarks Profile roundup.

The two-story commercial building covers the short block between Bellevue Ave and Crawford Place on the south side of Pine Street. It was lovingly restored by Hunters Capital in 2012. They took a useful building that was well-known for its first floor tenant Area 51 and turned it into an Auto Row gem that ushers folks up Pine Street and into the neighborhood. END_OF_DOCUMENT_TOKEN_TO_BE_REPLACED

On Labor Day weekend of 1929, 300 motorcyclists and their families roared into the sleepy resort town of Long Beach, WA for a motorcycle rally known then as a Gypsy Tour.

Aside from the three days of two-wheeled camaraderie that ensued, one rider raced ahead of the rest. His name was Marion Diederiks, an unknown motorcycle messenger from Portland who became “grand champion” after winning 8 out of 12 races over the weekend.

His victories included various pursuit and get-away races, the two-mile open, and a broad jump. Although a promising start of a career in racing, he curiously never won any other speed races like these hereafter. Instead he later found his true calling in a different form of racing known as the hill climb — a race to the top of rough hills that were so steep they were practically vertical.

Marion’s career negotiating these hills spanned two decades and culminated in the establishment of his own Harley Davidson dealership on a most unique hill — our very own Capitol Hill.

His fortune in cash prizes, his regional fame, and the tightly-knit group of riders he bonded with along the way made it all possible. The result was a dealership with a unique business model that wove standard sales and service and the spectacle of professional racing into the same fabric. And although this fabric abruptly unraveled with the onset of war and personal dramas, Marion kept the dealership going in one form or another for three decades on 12th Ave and later on Broadway. END_OF_DOCUMENT_TOKEN_TO_BE_REPLACED

A prime piece of Pike/Pine’s commercial past and present has a new owner. A company associated with the Keeler Investment Group, an investor in “Pacific Northwest-based, early stage, private equity and real estate opportunities,” for $14 million, according to King County records.

In March, Hunters officials told CHS they had a letter of intent with a local buyer.  “It’s not some big, national conglomerate,” Mike Oaksmith, director of development at Hunters said at the time. Elliott Bay owner Peter Aaron told CHS that the bookstore is well positioned for any change of building ownership. Aaron said Elliott Bay is in the midst of a “long term” lease — “more than 10 years is what I’m comfortable saying,” Aaron told CHS. END_OF_DOCUMENT_TOKEN_TO_BE_REPLACED

Capitol Hill’s craft distillery industry is being downed by half and one of the neighborhood’s longest running purveyors of craft cocktails is contemplating more changes on E Pike.

CHS has learned that Sun Liquor Distillery, one of two craft-level spirit makers operating in Pike/Pine’s light-manufacturing zone left behind by the neighborhood’s auto row legacy, is moving operations to a nondescript warehouse on the backstreets behind University Village.

“We need two times as much space and the loading on E Pike is just too dangerous,” Sun’s founder Michael Klebeck tells CHS. Klebeck said his company is also considering working with a new owner to take over the Sun Liquor lounge across the street from the bottling facility on E Pike. END_OF_DOCUMENT_TOKEN_TO_BE_REPLACED

The Landmarks Preservation Board voted Wednesday night to approve one auto row era building on Broadway nominated for landmark status and deny its next door neighbor. Both are properties owned by Seattle Central and are being lined up for affordable housing development by the school.

The board will now consider 1519 Broadway, the former Eldridge Tire Company, for designation in March. The consideration process for 1515 Broadway, today home to burger joint Freddy Jr.’s, ended with the board’s vote.

The other property, home to the burger joint today and, long ago, the Stewart Warner service station, didn’t have the qualities it takes to qualify the next part of the designation process.

“I think that this building is an important component of the undesignated auto row district in Capitol Hill, but it’s the poster child for lacking the ability to convey significance,” said board member Jeffrey Murdock. END_OF_DOCUMENT_TOKEN_TO_BE_REPLACED

As it seeks a partner in its plans for affordable housing, Seattle Central will take the auto row history of one of the two Broadway properties it is pushing forward toward redevelopment in front of the Seattle Landmarks Preservation Board next week. The board will weigh just what architectural features if any should be protected in the one-time Stewart Warner service station and its neighbor the old Eldridge Tire building in the 1500 block of Broadway between Pine and Pike. Today, the structures are home to a burger joint, a taco joint, and a hair stylist.

The board will consider the buildings for nomination Wednesday afternoon.

Seattle has a relatively robust and busy landmarks system but the process is as much about development as it is preservation. Seattle Central is moving the properties through the review as a prelude to redevelopment and a requirement of the permitting process for buildings from before 1940. END_OF_DOCUMENT_TOKEN_TO_BE_REPLACED

Capitol Hill’s auto row was created by entrepreneurs launching start-ups, of sorts. One modern vestige of the era has made a home for a set of entrepreneurs to make their mark in history with one of the neighborhood’s new economic lifebloods: coffee beans.

Bean Box, a “gourmet coffee” subscription and gift service, has been growing its business out of the recreated auto garage next to Bill’s off Broadway.

“Capitol Hill is wildly diverse from a population and diverse from a business standpoint,” Bean Box’s Ryan Fritzky told CHS earlier this year when we stopped by for a visit to check out the coffee bean packaging and shipping operation on E Pine. END_OF_DOCUMENT_TOKEN_TO_BE_REPLACED 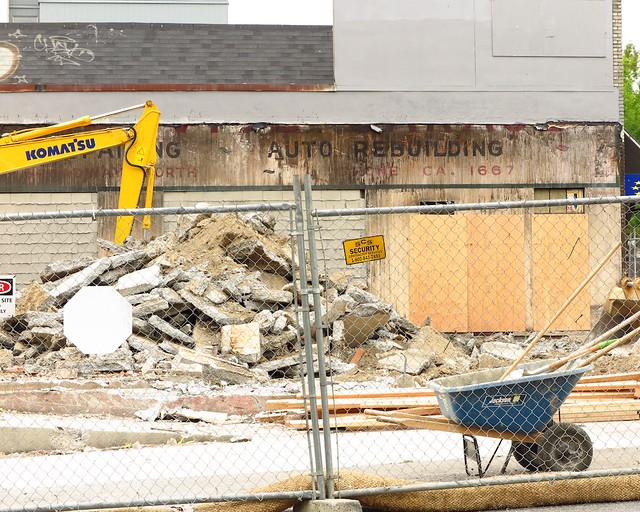 Early June became demolition season on Capitol Hill this week as three old buildings came down, raising clouds of musty dust and nostalgia in mostly equal measure. For the two most Capitol Hill memory-filled structures, we had some warning as the wrecking crews came for the old Broadway post office and the longtime 11th Ave home of Hugo House. Fewer knew about the impending doom that awaited the Emerald City Manor apartments on Boylston. But we’re guessing there might be some nostalgia floating in the dust over there, too. END_OF_DOCUMENT_TOKEN_TO_BE_REPLACED