Your community has played a pivotal role in the first stages of the SR 520 Montlake Project. We hope you continue to stay involved throughout the design and construction process.

To make it easier to stay up to date on recent progress and get information, the design-build contractor for the SR 520 Montlake Project, Graham, is hosting monthly update meetings open to the community. Please join us!

The rest of the city is about to join Capitol Hill’s core and downtown with 25 MPH speed limits on arterial streets. The lower speeds were implemented here in 2016. They have not done enough.

Citing a troublesome rise in dangerous collisions, Mayor Jenny Durkan announced plans Tuesday for the expanded citywide limits plus more crossings that give pedestrians a head start, more red light traffic cameras, and a new Major Crash Review Task Force “which will convene a panel of experts to analyze every serious and fatal collision” in Seattle. END_OF_DOCUMENT_TOKEN_TO_BE_REPLACED

Seattle is preparing to target one of the most lucrative — and easily the most traffic-bloating — corners of the city’s “app” economy to raise more money for public transit, affordable housing, and, yes, further regulating and monitoring the industry.

Mayor Jenny Durkan has rolled out a 2020 “Fare Start” budget proposal calling for new legislation that would add 51 cents to the cost of every Uber and Lyft ride in the city and set new minimum wage requirements for the industry’s freelance drivers.

Nope, the city says, this Capitol Hill traffic circle is definitely not home to Seattle’s first and only photo enforced stop sign.

“As you probably suspected, we did not put up this sign. We do not photo-enforce stop signs,” a Seattle Department of Transportation spokesperson tells CHS about the peculiar signage that appeared a few weeks back after a sign was wiped out in the traffic circle at 20th Ave E and E Crescent during Seattle’s bout of February snow. END_OF_DOCUMENT_TOKEN_TO_BE_REPLACED

Seattle may need some guidance on making faster, smarter street investments but Mayor Jenny Durkan’s new team is set to clean up some of the messes along the way.

Set to be unveiled by the mayor Wednesday in South Lake Union, the city’s new Rapid Response Team is planned to “help quickly clear debris and vehicles” from the city’s streets “so people and goods can keep moving, and help ensure that Seattle can make the most of its existing streets as we grow.”

The new squad is powered by five “Response Team trucks” dedicated to the cause and armed with “tools needed to clear debris and vehicles, help stranded drivers, and to guide traffic around incidents, using sirens, red lights, variable message and bright pink ‘Emergency Scene Ahead’ signs.”

While it’s a bit like buying Liquid Plumr when you need new pipes, the team is coming together as Seattle enters its “period of maximum constraint” with major projects like the Washington State Convention Center expansion, the closure of the Viaduct, waterfront construction, and the end of bus service in the Transit Tunnel conspire to further clog Seattle streets.

A full announcement from the mayor’s office on the new team is below. END_OF_DOCUMENT_TOKEN_TO_BE_REPLACED

City Hall is putting together a plan to toll downtown Seattle streets before the end of her first term in 2021, Mayor Jenny Durkan announced Tuesday.

Both efforts come as Seattle seeks to ease congestion in its core and cut the some 6 million tons of carbon dioxide emissions created every year in the city. END_OF_DOCUMENT_TOKEN_TO_BE_REPLACED

UPDATE: Some of Capitol Hill’s busiest streets are poised to get a 5 MPH speed limit reduction as part of a larger speed reduction proposal announced by city officials Tuesday. Speed limits on Capitol Hill’s arterial streets would be reduced from 30 MPH to 25 MPH, which includes E Pike, E Pine, Broadway, Madison, E Union, 15th, 12th, and Bellevue among others.

Seattle officials announced speeds on all residential streets would be reduced from 25 MPH to 20 MPH — the same speed limit as school zones, which will remain unchanged. Officials said that slowing vehicles down by even 5 MPH can be significant in improving survival rates in collisions.

“Speed kills,” said Council member Tim Burgess during a media event outside the Horizon House on First Hill. The City Council’s transportation committee is slated to take up the legislation on September 20th.

Council member Mike O’Brien, who chairs the City Council’s transportation committee, said he was confident the speed change legislation would be approved by City Council within a month. Once the legislation is passed, around 500 new speed limit signs will be installed at $200-$300 per sign. The city would then enter a warning period before police officers begin enforcing the new speeds. The move is part of Mayor Ed Murray’s Vision Zero plan to end traffic deaths by 2030.  END_OF_DOCUMENT_TOKEN_TO_BE_REPLACED

Transit Alert – Rts 12 & 60 traveling on Madison are experiencing delays more than 60 min. late this morning, due to heavy traffic.

If you’re wondering why traffic on Madison was a nightmare Thursday, blame a Department of Homeland Security-led training exercise involving Seattle Police near 6th and Madison.

SPD confirmed the training Thursday morning but referred CHS to the federal agency for more information. We’ve asked DHS for more on the nature of the training and the planned duration. The federal agency offers local law enforcement agencies a wide variety of “training opportunities,” according to its website.

Thursday morning, traffic backed-up to Boren and beyond as vehicles were re-routed around the training area for access to I-5. There were no local announcements of the training session.

You can check out the latest conditions on the CHS Traffic Cameras page.

@jseattle Police training at 6th & Madison. Traffic onto I-5 rerouted so all of Madison is at a standstill.

701 coffee tries to make the best out of a difficult situation with deals for road workers. (Image: 701 Coffee)

The massive overhaul of 23rd Ave, and all the near-term traffic headaches therein, are coming to the E Madison intersection this weekend. The intersection will close and the 11 and 48 busses will be rerouted along with car traffic as crews will work around the clock until Monday morning.

23rd Ave is a workhorse of a road, running along the backside of Capitol Hill and through the Central District connecting neighborhoods and commercial areas. The $46 million overhaul of 23rd between S Jackson and E John will transform the artery into a much more efficient, much safer route for cars, transit, pedestrians, and — thanks to an adjacent greenway — bicyclists. But like so many massive transportation construction projects, while the long road may bring promise, the first few miles of the process are pure pain for local merchants. The city’s Department of Transportation and Office of Economic Development have pitched in with extra signage and communicating work plans, but some owners are saying it’s not enough. END_OF_DOCUMENT_TOKEN_TO_BE_REPLACED 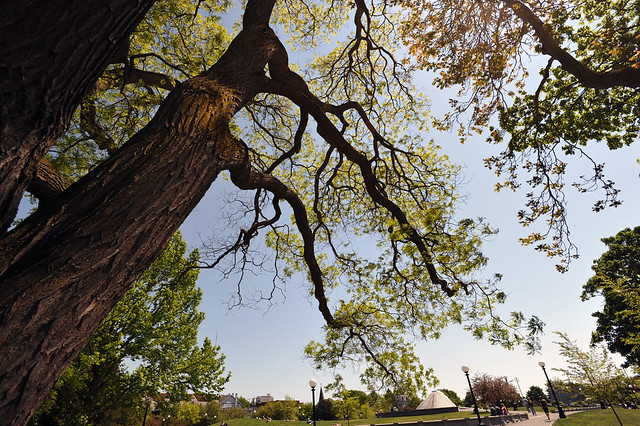 We don’t think China’s President Xi Jinping will make a stop by the Chinese Scholar Tree on the north edge of Cal Anderson Park but it has been — also — carefully protected should he decide to make a quick swing through Capitol Hill to visit the future light rail station.

Xi will, however, be all over downtown this week creating three days of even crazier traffic than usual and “limiting” vehicle traffic in the area “bounded by Olive St., 7th Ave, Lenora St and 4th Ave” to provide the leader a secure corridor of operations around his hotel. Details on the traffic impacts from the City of Seattle, below.

Seattle plans for traffic during visit of Chinese delegation

SEATTLE (Sept. 18, 2015) – The City of Seattle is working with local and federal agencies to manage traffic on Tuesday, Wednesday and Thursday of next week during the visit of a large Chinese delegation. Seattle officials are working to support U.S. Secret Service efforts to provide security.

“Seattle is honored to host President Xi and his delegation during his visit to the United States,” said Mayor Ed Murray. “With an international visit of this stature and the accompanying federal security requirements, we want all travelers to be advised of the impacts to business as usual. Everyone needs to be patient, reevaluate their commute plans, add in extra travel time, and monitor traffic alerts for the latest information.”

Intermittent closures of freeways, regional arterials and downtown streets are expected. The flow of buses and cars in downtown Seattle and around the region will be disrupted.

Travelers in Seattle are advised to plan ahead and expect traffic delays on all three days. Those who can postpone trips downtown or work from home are encouraged to do so. END_OF_DOCUMENT_TOKEN_TO_BE_REPLACED